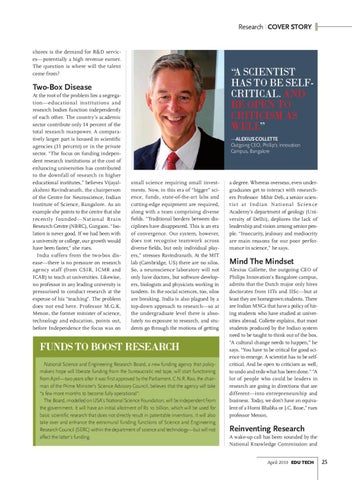 Research COVER STORY shores is the demand for R&amp;D services—potentially a high revenue earner. The question is where will the talent come from?

“A SCIENTIST HAS TO BE SELFCRITICAL. AND BE OPEN TO CRITICISM AS WELL”

Two-Box Disease At the root of the problem lies a segregation—educational institutions and research bodies function independently of each other. The country’s academic sector contribute only 14 percent of the total research manpower. A comparatively larger part is housed in scientific agencies (31 percent) or in the private sector. “The focus on funding independent research institutions at the cost of enhancing universities has contributed to the downfall of research in higher educational institutes,” believes Vijayalakshmi Ravindranath, the chairperson of the Centre for Neuroscience, Indian Institute of Science, Bangalore. As an example she points to the centre that she recently founded—National Brain Research Centre (NBRC), Gurgaon. “Isolation is never good. If we had been with a university or college, our growth would have been faster,” she rues. India suffers from the two-box disease—there is no pressure on research agency staff (from CSIR, ICMR and ICAR) to teach at universities. Likewise, no professor in any leading university is pressurised to conduct research at the expense of his “teaching”. The problem does not end here. Professor M.G.K. Menon, the former minister of science, technology and education, points out, before Independence the focus was on

small science requiring small investments. Now, in this era of “bigger” science, funds, state-of-the-art labs and cutting-edge equipment are required, along with a team comprising diverse fields. “Traditional borders between disciplines have disappeared. This is an era of convergence. Our system, however, does not recognise teamwork across diverse fields, but only individual players,” stresses Ravindranath. At the MIT lab (Cambridge, US) there are no silos. So, a neuroscience laboratory will not only have doctors, but software developers, biologists and physicists working in tandem. In the social sciences, too, silos are breaking. India is also plagued by a top-down approach to research—so at the undergraduate level there is absolutely no exposure to research, and students go through the motions of getting

FUNDS TO BOOST RESEARCH National Science and Engineering Research Board, a new funding agency that policymakers hope will liberate funding from the bureaucratic red tape, will start functioning from April—two years after it was first approved by the Parliament. C.N.R. Rao, the chairman of the Prime Minister’s Science Advisory Council, believes that the agency will take “a few more months to become fully operational”. The Board, modelled on USA’s National Science Foundation, will be independent from the government. It will have an initial allotment of Rs 10 billion, which will be used for basic scientific research that does not directly result in patentable inventions. It will also take over and enhance the extramural funding functions of Science and Engineering Research Council (SERC) within the department of science and technology—but will not affect the latter’s funding.

a degree. Whereas overseas, even undergraduates get to interact with researchers Professor Mihir Deb, a senior scient i s t a t I n d i a n Na t i o n a l S c i e n c e Academy’s department of geology (University of Delhi), deplores the lack of leadership and vision among senior people. “Insecurity, jealousy and mediocrity are main reasons for our poor performance in science,” he says.

Mind The Mindset Alexius Collette, the outgoing CEO of Philips Innovation’s Bangalore campus, admits that the Dutch major only hires doctorates from IITs and IISc—but at least they are homegrown students. There are Indian MNCs that have a policy of hiring students who have studied at universities abroad. Collette explains, that most students produced by the Indian system need to be taught to think out of the box. “A cultural change needs to happen,” he says. “You have to be critical for good science to emerge. A scientist has to be selfcritical. And be open to criticism as well, to undo and redo what has been done.” “A lot of people who could be leaders in research are going in directions that are different—into entrepreneurship and business. Today, we don’t have an equivalent of a Homi Bhabha or J.C. Bose,” rues professor Menon.