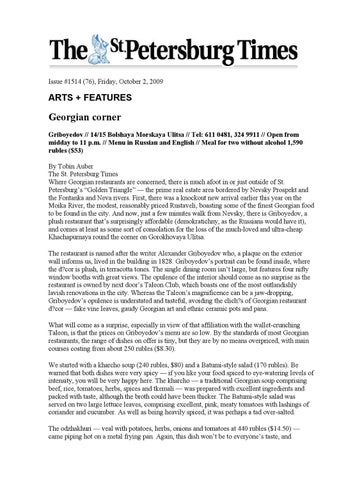 Georgian corner Griboyedov // 14/15 Bolshaya Morskaya Ulitsa // Tel: 611 0481, 324 9911 // Open from midday to 11 p.m. // Menu in Russian and English // Meal for two without alcohol 1,590 rubles ($53) By Tobin Auber The St. Petersburg Times Where Georgian restaurants are concerned, there is much afoot in or just outside of St. Petersburg’s “Golden Triangle” — the prime real estate area bordered by Nevsky Prospekt and the Fontanka and Neva rivers. First, there was a knockout new arrival earlier this year on the Moika River, the modest, reasonably priced Rustaveli, boasting some of the finest Georgian food to be found in the city. And now, just a few minutes walk from Nevsky, there is Griboyedov, a plush restaurant that’s surprisingly affordable (demokratichny, as the Russians would have it), and comes at least as some sort of consolation for the loss of the much-loved and ultra-cheap Khachapurnaya round the corner on Gorokhovaya Ulitsa. The restaurant is named after the writer Alexander Griboyedov who, a plaque on the exterior wall informs us, lived in the building in 1828. Griboyedov’s portrait can be found inside, where the d?cor is plush, in terracotta tones. The single dining room isn’t large, but features four nifty window booths with great views. The opulence of the interior should come as no surprise as the restaurant is owned by next door’s Taleon Club, which boasts one of the most outlandishly lavish renovations in the city. Whereas the Taleon’s magnificence can be a jaw-dropping, Griboyedov’s opulence is understated and tasteful, avoiding the clich?s of Georgian restaurant d?cor — fake vine leaves, gaudy Georgian art and ethnic ceramic pots and pans. What will come as a surprise, especially in view of that affiliation with the wallet-crunching Taleon, is that the prices on Griboyedov’s menu are so low. By the standards of most Georgian restaurants, the range of dishes on offer is tiny, but they are by no means overpriced, with main courses costing from about 250 rubles ($8.30). We started with a kharcho soup (240 rubles, $80) and a Batumi-style salad (170 rubles). Be warned that both dishes were very spicy — if you like your food spiced to eye-watering levels of intensity, you will be very happy here. The kharcho — a traditional Georgian soup comprising beef, rice, tomatoes, herbs, spices and tkemali — was prepared with excellent ingredients and packed with taste, although the broth could have been thicker. The Batumi-style salad was served on two large lettuce leaves, comprising excellent, pink, meaty tomatoes with lashings of coriander and cucumber. As well as being heavily spiced, it was perhaps a tad over-salted. The odzhakhuri — veal with potatoes, herbs, onions and tomatoes at 440 rubles ($14.50) — came piping hot on a metal frying pan. Again, this dish won’t be to everyone’s taste, and

certainly isn’t for those on a diet. Essentially a fry-up, very heavy on the oil, with crunchy golden brown potatoes and succulent meat, it will do little for your figure but was irresistibly delicious. The abzhabsandali, a ragout of eggplant, paprika, tomatoes and herbs (180 rubles, $6), unfortunately, was by no means piping hot and was steeped in oil — it got the thumbs down from my vegetarian dining partner. Any complaints, however, were overshadowed by the towering success of the megrelian khachapuri (260 rubles, $850) — packed with cheese, moist on the inside, a light crunchiness on the outside, it managed to be very rich without being greasy. As an upmarket but very cheap option, then, Griboyedov has its strengths, but Rustaveli, also on the Moika, needn’t fear the competition just yet.