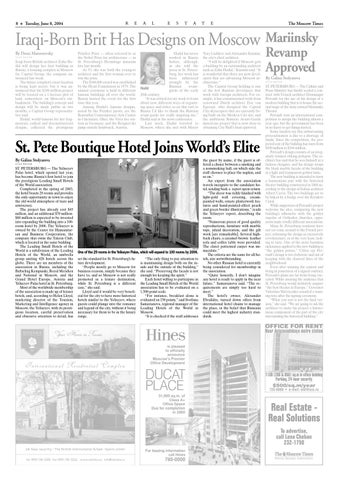 Iraqi-born British architect Zaha Hadid will design her first building in Russia, a housing complex in Moscow for Capital Group, the company announced last week. The future complex’s exact location is being kept secret, but it was announced that the $180 million project will be located on a 1-hectare plot of land, somewhere on Moscow’s embankment. The building’s concept and design will be made public in two months, a Capital Group representative said. Hadid, world-famous for her fragmentary, radical and deconstructivist designs, collected the prestigious

Pritzker Prize — often referred to as the Nobel Prize for architecture — in St. Petersburg’s Hermitage museum late last month. At 53, she was both the youngest architect and the first woman ever to win the prize. The $100,000 award was established by the Hyatt Foundation in 1979. The annual ceremony is held in different famous buildings all over the world. Russia hosted the event for the first time this year. Among Hadid’s famous designs, noted by the Pritzker jurors, are the Rosenthal Contemporary Arts Center in Cincinnati, Ohio, the Vitra fire station in Germany, and the Bergisel ski jump outside Innsbruck, Austria.

Hadid has never worked in Russia before, although, as she told the press in St. Petersburg, her work has been influenced strongly by the Russian avantgarde of the early

20th century. “It was critical for my work to learn about new, different ways of organizing space and order, so on this visit to Russia I’d like to thank the Russian avant-garde for really inspiring me,” Hadid said at the news conference. Last week, Hadid traveled to Moscow, where she met with Mayor

Yury Luzhkov and Alexander Kuzmin, the city’s chief architect. “I will be delighted if Moscow gets a building by an outstanding architect such as Zaha Hadid,” Kuzmin said. “It is wonderful that there are now developers that are advancing Moscow architecture.” The Capital Group holding is one of the few Russian developers that work with foreign architects. For example, it has commissioned work from renowned Dutch architect Eric van Egeraat, who designed the Capital City skyscrapers that are currently being built on the Moskva-City site, and the ambitious Russian Avant-Garde mixed-use project that is now close to obtaining City Hall’s final approval.

ST. PETERSBURG — The Yeliseyev Palas hotel, which opened last year, has become Russia’s first hotel to join the prestigious Leading Small Hotels of the World association. Completed in the spring of 2003, the hotel boasts 29 rooms and provides the only opportunity in town to enjoy the old-world atmosphere of tsars and aristocracy. The project has already cost $45 million, and an additional $70 million$80 million is expected to be invested into expanding the building into a 100room hotel by 2006. The Yeliseyev is owned by the Center for Humanitarian and Business Cooperation, the company that owns the Taleon Club, which is located in the same building. The Leading Small Hotels of the World is a subdivision of the Leading Hotels of the World, an umbrella group uniting 420 hotels across the globe. There are six members of the association in Russia, including the Baltschug Kempinski, Royal Meridien and National in Moscow, and the Grand Hotel Europe, Astoria and Yeliseyev Palas hotel in St. Petersburg. Most of the worldwide membership of the association is made up of leisure hotels, and, according to Helen Lloyd, marketing director of the Tourism, Marketing and Intelligence agency in Moscow, the Yeliseyev, with its prestigious location, careful preservation and obsessive attention to detail, has

One of the 29 rooms in the Yeliseyev Palas, which will expand to 100 rooms by 2006. set the standard for St. Petersburg’s future development. “People mostly go to Moscow for business reasons, simply because they have to, and so Moscow is not really promoted as a leisure destination, while St. Petersburg is a different case,” she said. Lloyd said it would be very beneficial for the city to have more historical hotels similar to the Yeliseyev, where guests could plunge into the romance and legend of the city, without it being necessary for them to be in the luxury range.

“The only thing to pay attention to is maintaining design both on the inside and the outside of the building,” she said. “Preserving the facade is not enough for keeping the spirit.” Each hotel willing to participate in the Leading Small Hotels of the World association has to be evaluated on a 1,500-point scale. “For instance, breakfast alone is evaluated on 150 points,” said Svetlana Samarianova, regional manager of the Leading Hotels of the World in Moscow. “It is checked if the staff addresses

the guest by name, if the guest is offered a choice between a smoking and a nonsmoking hall, on which side the staff chooses to place the napkin, and so on.” An expert from the association travels incognito to the candidate hotel, sending back a report upon return. “The decor was richly finished with light-gold wall covering, creampainted walls, ornate plasterwork features and hand-painted-effect peach and green border illustrations,” reads the Yeliseyev report, describing the room. “Numerous pieces of good quality reproductions, furniture with marble tops, inlaid decoration, and the gilt work [are remarkable]. Several highback chairs, a caramel-brown leather sofa and coffee table were provided. The claret patterned carpet was immaculate.” The criteria are the same for all hotels, size notwithstanding. No other Russian hotel is currently being considered for membership in the association. “Quite honestly, I don’t imagine any hotel is ready to apply in the near future,” Samarianova said. “The requirements are simply too hard to meet.” The hotel’s owner, Alexander Ebralidze, turned down offers from international hotel chains to manage the place, in the belief that Russians could meet the highest industry standards.

ST. PETERSBURG — The Culture and Press Ministry has finally sealed a contract with French architect Dominique Perrault for the use of his design of a modern building that is to house the second stage of the state-owned Mariinsky Theater. Perrault won an international competition to design the building almost a year ago, but the government has been in no hurry to get things started. Some insiders say this embarrassing procrastination is due to a shortage of funds. Since the competition, the projected cost of the building has risen from $100 million to $244 million. Perrault’s design consists of an irregularly formed oblong polygon. The architect has said that he sees himself as a fashion designer, and his design wraps the black marble facade of the building in a light and transparent golden tunic. The new building is intended to form a harmonious pair with the historical theater building constructed in 1860 according to the design of Italian architect Albert Cavos. The two buildings are to be linked by a bridge over the Kryukov Canal. While supporters of Perrault’s project welcome the idea, comparing the new building’s silhouette with the golden cupolas of Orthodox churches, opponents make totally different associations. Many St. Petersburg residents have not yet come around to the French project, criticizing the design as excessively revolutionary, or at the very least, lacking in taste. One of the more harmless nicknames applied to the new building is “the golden potato.” Critics say Perrault’s design is too elaborate and out of keeping with the classical lines of the neighborhood. Even after winning the contest and being in possession of a signed contract, Perrault’s plans are far from being executed. While assuring the audience that St. Petersburg would definitely acquire “the best theater in Europe,” Governor Valentina Matviyenko sounded a warning note after the signing ceremony. “What you saw is not the final version,” she said. “We are going to ask the architect to make his project a harmonious component of the part of the city surrounding the historical building.”