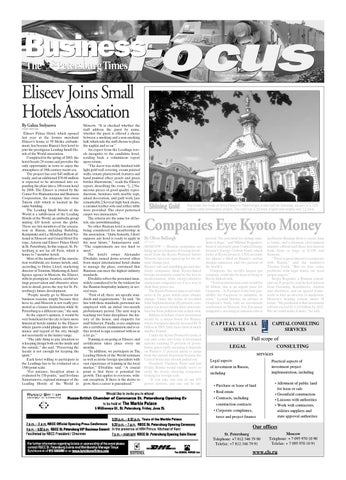 Eliseev Palace Hotel, which opened last year at the former merchant Eliseev’s house at 59 Moika embankment, has become Russia’s first hotel to join the prestigious Leading Small Hotels of the World association. Completed in the spring of 2003, the hotel boasts 29 rooms and provides the only opportunity in town to enjoy the atmosphere of 19th century tsarist era. The project has cost $45 million already, and an additional $70-80 million is expected to be investmed into expanding the place into a 100-room hotel by 2006. The Eliseev is owned by the Center For Humanitarian and Business Cooperation, the company that owns Taleon club which is located in the same building. The Leading Small Hotels of the World is a subdivision of the Leading Hotels of the World, an umbrella group uniting 420 hotels across the globe. There are fsix members of the association in Russia, including Baltchug, Kempinski and Le Meridian Royal National in Moscow and Grand Hotel Europe, Astoria and Eliseev Palace Hotel in St. Petersburg. In this respect, St. Petersburg is not far off Paris, which is home to 7 member hotels. Most of the members of the association worldwide are leisure hotels, and, according to Helen Lloyd, marketing director of Tourism, Marketing &amp; Intelligence agency in Moscow, the Eliseev, with its prestigious location, careful settings preservation and obsessive attention to detail, paves the way for St. Petersburg’s future development. “People mostly go to Moscow for business reasons, simply because they have to, and Moscow is not really promoted as a leisure destination while St. Petersburg is a different case,” she said. In the expert’s opinion, it would be very beneficial for the city to have more historical hotels similar to the Eliseev where guests could plunge into the romance and legend of the city, though not necessarily in the luxury range. “The only thing to pay attention to is keeping design both on the inside and the outside,” she said. “Preserving the facade is not enough for keeping the spirit.” Each hotel willing to participate in the Leadings has to be evaluated on a 1500 point scale. “For instance, breakfast alone is evaluated by 150 points,” said Svetlana Samarianova, regional manager of the Leading Hotels of the World in

Moscow. “It is checked whether the staff address the guest by name, whether the guest is offered a choice between a smoking and a non-smoking hall, which side the staff choose to place the napkin and so on.” An expert from the Leadings travels incognito to the candidate hotel, sending back a voluminous report upon return. “The decor was richly finished with light gold wall covering, cream painted walls, ornate plasterwork features and hand painted effect peach and green border illustrations,” reads the Eliseev report, describing the room. “[...] Numerous pieces of good quality reproductions, furniture with marble tops, inlaid decoration, and guilt work [are remarkable.] Several high back chairs, a caramel leather sofa and coffee table were provided. The claret patterned carpet was immaculate.” The criteria are the same for all hotels, size notwithstanding. No other Russian hotel is currently being considered for membership in the association. “Quite honestly, I don’t suppose any hotel is ready to apply in the near future,” Samarianova said. “The requirements are too hard to meet.” The hotel’s owner Alexander Ebralidze turned down several offers from major international hotel chains to manage the place, convinced that Russians can meet the highest industry standards. Ebralidze solves the personnel issue, widely considered to be the trickiest for the Russian hospitality industry, in several ways. “First of all, there are specific standards and requirements,” he said. “In line with these standards, personnel are employed with an initial two-month probationary period. The next step is teaching two basic disciplines: the history of the house, and etiquette for staff behavior. Finally, every employee sits a certificate examination and is either invited to sign a contract with us or is let go.” Training is on-going at Eliseev, and certification takes place every six months. “In addition, we participate in The Leading Hotels of the World seminars as well as invite foreign specialists with vast experience of training in the local market,” Ebralidze said. “A crucial point is that there is potential for growth. This applies to everyone, without exception. If there is the desire to grow, then a career is guaranteed.”

The Under the Code of Arms Palace in Peterhof got a new roof on Saturday, as part of a 120 million ruble rennovation project. The roof has 3.19 kilos of gold and weighs over 12 tons.

MOSCOW — Russian companies are lining up for a bonanza of foreign investment from the Kyoto Protocol before Moscow has even signed up for the climate change pact. Russia’s vast and crumbling gas and electricity companies think Kyoto-linked foreign investment could be the key to modernisation, while energy-intensive aluminium companies see it as a way to slash their power use. The Kyoto Protocol aims to cut emissions of the gases which cause climate change. Under the terms of so-called Joint Implementation (JI) projects, companies can invest outside their own countries but book pollution cuts as their own. Billions of dollars of new investment would be a major boost for Russia, where foreigners directly invested $6.78 billion in 2003, little more than in much smaller Poland. Under the Kyoto Protocol’s terms, it can only come into force if developed nations emitting 55 percent of greenhouse gases ratify, meaning it depends on Russia’s 17 percent quota to jump from the current 44 percent because the United States has already pulled out. President Vladimir Putin said last Friday Russia would rapidly move to ratify the treaty, cheering companies looking for foreign cash. “If you take any one of our 635 power stations, any one can be im-

proved. The potential for cutting emissions is huge,” said Mikhail Rogankov, head of electricity giant Unified Energy System’s Energy Carbon Fund, which looks at Kyoto projects. UES accounts for almost a third of Russia&#39;s carbon dioxide emissions, and two percent of the world&#39;s. Gazprom, the world’s largest gas company, could also be keen to bring in Kyoto-linked cash. “Total modernisation costs would be $8 billion, this is an urgent issue for Gazprom... A JI project is the best possibility for Gazprom to minimise its costs,” Leonid Maslov, an adviser at Gazprom’s bank, told an investment conference in Moscow. For European companies, investing in emission cuts at

inefficient Russian firms is easier than at home, and a German environment ministry official said there was interest from firms as large as E.ON and Siemens. “There is great interest to cooperate with Russia,” said the ministry’s Thomas Forth. “But we have some problems with legal status...we need proper papers.” Sergei Rogenko, a Russian consultant on JI projects, said he had interest from Germany, Scandinavia, Austria and elsewhere, and an agreed framework to find an investor to modernise Moscow’s heating system under JI terms. “My prediction is that investment will not exceed $1.5-2.0 billion by 2012. But we could make it more,” he said.