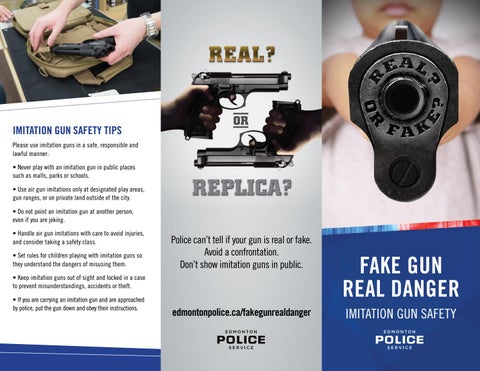 Police can’t tell if your gun is real or fake. Avoid a confrontation. Don’t show imitation guns in public.

• Keep imitation guns out of sight and locked in a case to prevent misunderstandings, accidents or theft. • If you are carrying an imitation gun and are approached by police, put the gun down and obey their instructions.

An imitation gun is a copy of an actual firearm. Sometimes a fake gun is indistinguishable from a real gun because of the attention to detail. Imitations can include:

Police respond to numerous incidents where firearms are reported, but later upon close examination, the guns are revealed to be realistic imitations.

• Airsoft, BB or pellet guns • Replica or prop guns • Paintball guns • Toy or novelty guns Imitations can be fun to play with, but they can pose safety hazards and create fear and panic if used in public places. People might mistake a fake gun for a real gun and call police, which could have serious consequences.

Because of their realism, imitation guns have also been involved in numerous police shootings and close calls across North America. Police take firearms complaints seriously due to the threat to public and officer safety, and will respond quickly with appropriate resources, tactics and level of force. It could be a potentially deadly confrontation. If it looks like a gun it is treated like a gun by police. Even under ideal conditions, it can be challenging to determine if a gun is real or fake.

Because of the potential risks, you cannot show or use imitation guns in public places. Depending on the circumstances, you can be fined, arrested, or charged and have your gun seized. • City of Edmonton Bylaw #14614 – Possessing a loaded weapon capable of firing a projectile, or firing a projectile in a public place, can result in a fine between $500 and $10,000, a mandatory court appearance and up to six months in jail. • Canadian Firearms Act – There are legal requirements for the ownership, safe use, transportation and storage of certain types of air guns. Check with the RCMP Canadian Firearms Program or your retailer for more information. • Criminal Code of Canada – Using an imitation firearm to commit a crime results in the same penalties as using a real firearm. Possession of an imitation gun can cause individuals to breach their court-imposed conditions. 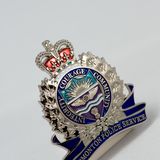