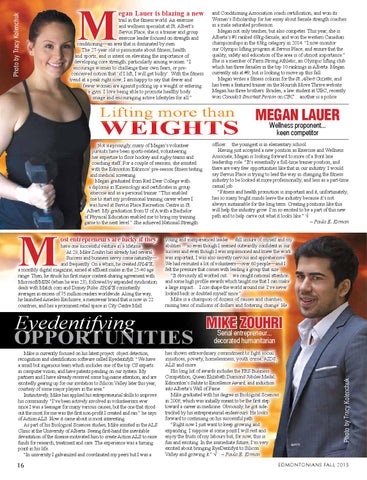 trail in the fitness world. An exercise and wellness specialist at St. Albert’s Servus Place, she is a trainer and group exercise leader focused on strength and conditioning—an area that is dominated by men. The 27-year old is passionate about fitness, health and sports, and is intent on elevating the importance of developing core strength, particularly among women. “I encourage women to challenge their own fears, or preconceived notion that ‘if I lift, I will get bulky’. With the fitness trend at a peak right now, I am happy to say that fewer and fewer women are against picking up a weight or entering a gym. I love being able to promote healthy body image and encouraging active lifestyles for all.”

and Conditioning Association coach certification, and won its Women’s Scholarship for her essay about female strength coaches in a male saturated profession. Megan not only teaches, but also competes. This year, she is Alberta’s #1 ranked 69kg-female, and won the western Canadian championships in the 63kg category in 2014. “I now monitor our Olympic lifting program at Servus Place, and ensure that the quality, safety and education of the area is of utmost importance.” She is a member of Farm Strong Athletic, an Olympic lifting club which has three females in the top 10 rankings in Alberta. Megan currently sits at #9, but is looking to move up this fall. Megan writes a fitness column for the St. Albert Gazette, and has been a featured trainer on the Nourish Move Thrive website. Megan has three brothers: Braden, a law student at UBC, recently won Canada’s Smartest Person on CBC… another is a police

weights Not surprisingly, many of Megan’s volunteer pursuits have been sports-related, volunteering her expertise to floor hockey and rugby teams and coaching staff. For a couple of seasons, she assisted with the Edmonton Eskimos’ pre-season fitness testing and medical screening. Megan graduated from Red Deer College with a diploma in Kinesiology and certificates in group exercise and as a personal trainer. “This enabled me to start my professional training career where I was hired at Servus Place Recreation Centre in St. Albert. My graduation from U of A with a Bachelor of Physical Education enabled me to bring my training game to the next level.” She achieved National Strength

ost entrepreneurs are lucky if they

have one successful venture in a lifetime. At 28, Mike Zouhri has already had several. Success and business savvy come naturally— and frequently. On a whim, he created SHAVE, a monthly digital magazine, aimed at affluent males in the 25-40 age range. Then, he struck his first major content-sharing agreement with Microsoft/MSN (when he was 23), followed by expanded syndication deals with Match.com and Disney Pulse. SHAVE consistently averages in excess of 75 million readers worldwide. Along the way, he launched Amedeo Exclusive, a menswear brand that is now in 22 countries, and has a prominent retail space in City Centre Mall.

officer… the youngest is in elementary school. Having just accepted a new position as Exercise and Wellness Associate, Megan is looking forward to more of a front line leadership role. “It’s essentially a full-time trainer position, and there are very few opportunities like that in our industry. I would say Servus Place is trying to lead the way in changing the fitness industry to be looked at more professionally, and less as a part-time casual job. “Fitness and health promotion is important and it, unfortunately, has so many bright minds leave the industry because it’s not always sustainable for the long term. Creating positions like this will help the industry grow. I’m so excited to be a part of this new path and to help carve out what it looks like.” √ ~ Paula E. Kirman

young and inexperienced leader… still unsure of myself and my abilities… so even though I seemed outwardly confident in our success and even though I was impassioned and knew the work was important, I was also secretly nervous and apprehensive. We had recruited a lot of volunteers—over 60 people—and I felt the pressure that comes with leading a group that size. “It obviously all worked out… we caught national attention and some high profile awards which taught me that I can make a large impact… I can shape the world around me. I’ve never looked back or doubted myself since.” Mike is a champion of dozens of causes and charities, raising tens of millions of dollars and fostering change. He

Eyedentifying opportunities Mike is currently focused on his latest project: object detection, recognition and identification software called EyedentifyIt. “We have a small but ingenious team which includes one of the top CS experts in computer vision, and have patents pending on our system. My partners and I have already received some big-name attention, and are excitedly gearing up for our invitation to Silicon Valley later this year, courtesy of some major players in the area.” Instinctively, Mike has applied his entrepreneurial skills to improve his community. “I’ve been actively involved in volunteerism ever since I was a teenager for many various causes, but the one that stood out the most for me was the first non-profit I created and ran.” he says of Action ALS. How it came about is most interesting. As part of his Biological Sciences studies, Mike assisted in the ALS Clinic at the University of Alberta. Seeing first-hand the inevitable devastation of the disease motivated him to create Action ALS to raise funds for research, treatment and care. The experience was a turning point in his life. “In university I galvanized and coordinated my peers but I was a

has shown extraordinary commitment to fight social injustices, poverty, homelessness, youth crime, AIDS, ALS and more. His long list of awards includes the FRS Business Competition, Queen Elizabeth Diamond Jubilee Medal, Edmonton’s Salute to Excellence Award, and induction into Alberta’s Wall of Fame. Mike graduated with his degree in Biological Sciences in 2009, which was initially meant to be the first step toward a career in medicine. Obviously, he got sidetracked by his entrepreneurial endeavours. He looks forward to continuing on his successful path. “Right now I just want to keep growing and expanding. I suppose at some point I will rest and enjoy the fruits of my labours but, for now, this is fun and exciting. In the immediate future, I’m very excited about bringing EyeDentifyit to Silicon Valley and growing it.” √ ~ Paula E. Kirman

egan Lauer is blazing a new 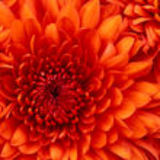