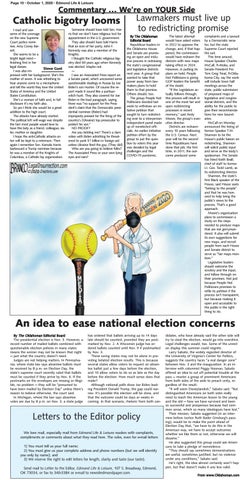 Commentary ... We’re on YOUR Side

Catholic bigotry looms I read and saw some of the coverage on the new Supreme Court justice nominee, Amy Coney Barrett. She seems to be a bright legal mind -finishing first in her legal classes. Steve Gust I was also impressed with her background. She’s the mother of seven. It was refreshing to hear anyone come to a microphone and tell the world they love the United States of America and the United States Constitution. She’s a woman of faith and, in full disclosure it’s my faith also. So yes I think she would be a great addition to the high court. The attacks have already started. The political left will wage war despite the fact most people would love to have this lady as a friend, colleague, sister, mother or daughter. I hope the anti-Catholic attacks on her will be kept to a minimum. Then again I remember Sen. Kamala Harris barbecued a Trump nominee because he was a member of the Knights of Columbus, a Catholic lay organization.

Someone should have told Sen. Harris that we don’t have religious test for appointment in the U.S. government. They also should have told Harris that an icon of her party, John F. Kennedy was also a member of the Knights. I thought the Catholic religious bigotry died 60 years ago when Kennedy was elected. Maybe not. ---I saw an Associated Press report on a Senate panel, which uncovered some questionable dealings in Russia by Joe Biden’s son Hunter. Of course the report made it sound like a partisan witch hunt. They also covered for Joe Biden in the lead paragraph, saying there was “no support for the President’s claim that the Democratic presidential nominee (Biden) had improperly pressed for the firing of the country’s (Ukraine) top prosecutor to protect his son.” NO PROOF? Are you kidding me? There’s a darn video with Biden admitting he threatened to yank $1 billion in foreign aid unless Ukraine fired the guy. (They did) Who are you going to believe folks? The Associated Press or your own lying eyes and ears?

Lawmakers must live up to redistricting promise By The Oklahoman Editorial Board Republican leaders in the Oklahoma House and Senate are promising an open and inclusive process in redrawing the state’s congressional and legislative districts next year. A group that wanted to take that power away from lawmakers plans to hold them to that promise. Others should, too. The group People Not Politicians decided last week to withdraw an initiative petition that sought to turn redistricting over to a nine-person independent panel made up of nonelected officials. An earlier initiative petition effort by the group to put the question to voters this year was derailed by legal challenges and the COVID-19 pandemic.

The latest attempt would have asked voters in 2022 to approve the change, and, if that happened, the commission would have redrawn the districts with new maps taking effect in 2024. However, in putting its plans on hold, People Not Politicians is giving GOP leaders the benefit of the doubt. “If the Legislature actually follows through, this process will result in one of the most fair and open redistricting processes in recent memory,” said Andy Moore, the group’s executive director. Districts are redrawn every 10 years following the U.S. Census. Next year will be the second time Republicans have done that job; the first time, in 2011, the outcome produced some

complaints and a lawsuit by a Democratic senator, but the state Supreme Court rejected the suit. This time around, House Speaker Charles McCall, R-Atoka, and Senate President Pro Tem Greg Treat, R-Oklahoma City, say the work will include town hall meetings across the state, public submission of proposed maps of legislative and congressional districts, and the ability for the public to give their recommendations for new boundaries. McCall on Monday announced the hiring of former Speaker T.W. Shannon to be the House’s public liaison on redistricting. Shannon will solicit public input and serve as the body’s spokesman. The Senate has hired Keith Beall, chief of staff to former Lt. Gov. Todd Lamb, as its redistricting director. Shannon, the state’s first Black speaker of the House, said House seats “belong to the people” and that he was honored to help bring the public’s views to the process. That&#39;s a good approach. Moore’s organization plans to commission a study on the steps needed to produce maps that are not gerrymandered. It also will submit its own suggestions for new maps, and recruit people from each House and Senate district to serve as “fair maps monitors.” Legislative leaders should welcome the scrutiny and the input, and follow through on their promises. Not just because People Not Politicians promises to refile its petition if the process isn’t transparent, but because making it open and accessible to the public is the right thing to do.

An idea to ease national election concerns By The Oklahoman Editorial Board The presidential election is Nov. 3. However, a record number of mailed ballots combined with questionable election policies in many states means the winner may not be known that night — just what the country doesn’t need. Judges are not helping matters. In Pennsylvania, where state law says absentee ballots must be received by 8 p.m. on Election Day, the state’s supreme court recently ruled that ballots must be counted if they arrive by Nov. 6. If the postmarks on the envelopes are missing or illegible, no problem — they will be “presumed to have been mailed by Election Day” unless there’s reason to believe otherwise, the court said. In Michigan, where the law says absentee votes are due by 8 p.m. on Nov. 3, a state judge

has ordered that ballots arriving up to 14 days late should be counted, provided they are postmarked by Nov. 2. A Wisconsin judge has ordered ballots counted until Nov. 9 if postmarked by Nov. 3. These swing states may not be alone in providing belated election results. This is because several states allow voters to request an absentee ballot just a few days before the election, and 10 allow voters to do so as late as the day before the election. How much sense does that make? Although national polls show Joe Biden leading President Donald Trump, the gap could narrow. It’s possible this election will be close, and that the outcome could be days or weeks in coming. In that scenario, rhetoric from both can-

Letters to the Editor policy We love mail, especially mail from Edmond Life &amp; Leisure readers with complaints, compliments or comments about what they read here. The rules, even for e-mail letters: 1) You must tell us your full name; 2) You must give us your complete address and phone numbers (but we will identify you only by name); and 3) We reserve the right to edit letters for length, clarity and taste (our taste). Send mail to Letter to the Editor, Edmond Life &amp; Leisure, 107 S. Broadway, Edmond, OK 73034, or fax to 340-3384 or e-mail to news@edmondpaper.com.

didates, who have already said the other side will try to steal the election, would go into overdrive. Legal challenges would, too. Some of the unrest on display this summer could reignite. Larry Sabato, the widely regarded director of the University of Virginia’s Center for Politics, suggests the country faces “a real danger zone” between Nov. 3 and the inauguration. In an interview with columnist Peggy Noonan, Sabato offered an idea to cut off potential trouble at the pass — muster a group of prominent Americans from both sides of the aisle to preach unity, regardless of the result. “It will seem Disneylandish,” Sabato said. “But distinguished Americans on both sides really need to teach the American lesson to the young and the old — how we have survived and been so successful and prosperous because had common sense, which so many ideologues have lost.” Their mission, Sabato suggested (in an interview before Justice Ruth Bader Ginsburg&#39;s passing), would be to make the point ahead of Election Day that, “we have to do this in the American way, we have to accept outcomes whether we like them or not, otherwise we will dissolve.” He also suggested this group could ask Americans to take a pledge of nonviolence. “They should say sometimes demonstrations are useful, sometimes justified, but no violence under any conditions,” Sabato said. He’s right, the idea almost certainly won’t happen, but that doesn’t make it any less valid. From www.Oklahoman.com 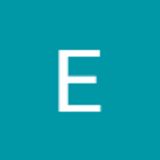