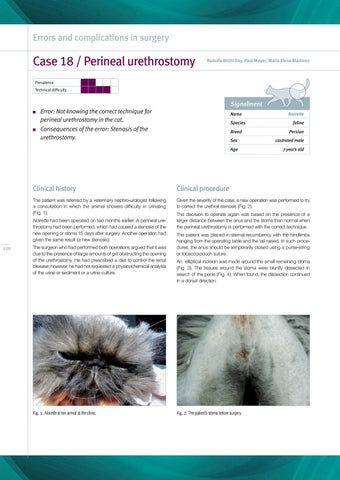 Errors and complications in surgery

The patient was referred by a veterinary nephro-urologist following a consultation in which the animal showed difficulty in urinating (Fig. 1).

Given the severity of the case, a new operation was performed to try to correct the urethral stenosis (Fig. 2).

Noirette had been operated on two months earlier. A perineal urethrostomy had been performed, which had caused a stenosis of the new opening or stoma 15 days after surgery. Another operation had given the same result (a new stenosis). 120

Error: Not knowing the correct technique for perineal urethrostomy in the cat. Consequences of the error: Stenosis of the urethrostomy.

The surgeon who had performed both operations argued that it was due to the presence of large amounts of grit obstructing the opening of the urethrostomy. He had prescribed a diet to control the renal disease; however, he had not requested a physicochemical analysis of the urine or sediment or a urine culture.

Fig. 1. Noirette at her arrival at the clinic.

The decision to operate again was based on the presence of a larger distance between the anus and the stoma than normal when the perineal urethrostomy is performed with the correct technique. The patient was placed in sternal recumbency with the hindlimbs hanging from the operating table and the tail raised. In such procedures, the anus should be temporarily closed using a purse-string or tobacco-pouch suture. An elliptical incision was made around the small remaining stoma (Fig. 3). The tissues around the stoma were bluntly dissected in search of the penis (Fig. 4). When found, the dissection continued in a dorsal direction.

Fig. 2. The patient’s stoma before surgery. 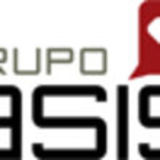 This new book in the Small Animal Surgery series has been designed as a review of the surgical errors and complications that may occur in da...

This new book in the Small Animal Surgery series has been designed as a review of the surgical errors and complications that may occur in da...