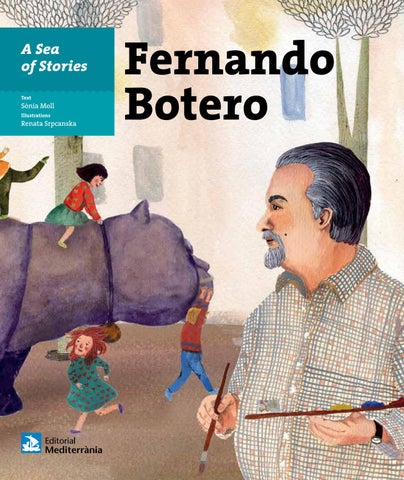 A Sea of Stories

A Sea of Stories Text

to take you somewhere you’re going to love.”

from school and they go to have a

April afternoon. Spring has brought out the

Her aunt Nuria comes to pick her up

sweet sponge cake. They love to dip it in the dense liquid as if it were a churro, the typical

long fried doughnut eaten in Spain. But today Sara has only been stirring her

chocolate and seems to have no intention of touching the cake. She was very quiet during

the walk from school to the café, too. When

her aunt asks her what the matter is, Sara

an exhibition of paintings for the end of term. The teacher told us we had to choose a classmate and do their portrait in

watercolours or colouring pencils, whatever we want. We have to tell her who we want to paint on Monday.”

flowers on the balconies and a lovely warm

light shines down on Barcelona’s streets and squares. Sara’s aunt leads her to the library at the end of the avenue. She takes down some large books and they go into one of the study rooms, where they are allowed to talk.

“Do you know the portrait called the Mona Lisa by Leonardo da Vinci?” asks Nuria.

“Is that the one with the really still woman

who looks like she wants to smile but doesn’t?”

“Exactly. That’s how Leonardo saw her. But

look at the difference between da Vinci’s portrait and this one by a painter from this century, Fernando Botero.”

“That’s a wonderful idea!” exclaims her

Aunty Nuria opens one of the books to

“No, it’s not, because nobody’s going to

entitled Mona Lisa, Age 12. The girl in it

aunt. But Sara shakes her head in annoyance. pick me!”

“And why is nobody going to choose you?”

Sara stares at her aunt as if it is completely obvious why not and her aunt must be a bit dim.

“Because I’m fat and I’m not pretty!”

Sara is no longer angry, she is very sad and

takes her hand and says, “Come on, I’m going

They leave the café and step into the sunny

reveal a colourful page with a portrait bears a striking resemblance to Sara, with

her round face, small coffee-coloured eyes and long dark wavy hair. She is wearing a black veil over her head and a dark green

dress from long ago. “From the Renaissance,” aunty Nuria says. The girl in the painting

is looking off to the side slightly and a half-smile seems to be forming on her tiny mouth.

a robust, voluminous woman is seated in

to mend clothes so they don’t go to waste.

holding gardening tools and surrounded by

youngest one, Pedro, by his second wife,

blue fabric under the needle.

rips in trousers. Sara’s mother has a very

hoses. Another portrait, The Sisters, from

Nuria. “He had four children and the died in a car accident in Spain when he was

just four years old. But he also painted other

groups of people, not just families. Here, look at this one.” Aunty Nuria shows Sara a scene that is familiar to her: four women

sewing together. In the centre of the picture,

front of a sewing machine feeding a sky-

Gladys is Liliana’s mother and a friend of

Sara’s mother and aunt. Sometimes they meet up for afternoon tea and a chat, to exchange clothes, recipes and books or even

They sew on buttons, repair zips or mend

the one in the painting, and often says she would like to have been a seamstress and made bridal gowns.

of people in groups. In one example, The Gardening Club, painted in 1997, five women

in a garden occupy nearly the entire space,

a sitting room, all of them round, solid and

voluptuous, wearing different coloured dresses. One has a bun, another sports a

bright red apron and they are surrounded by cats, one of which sits on a wooden

dresser trying to catch flies behind the domestic scene!