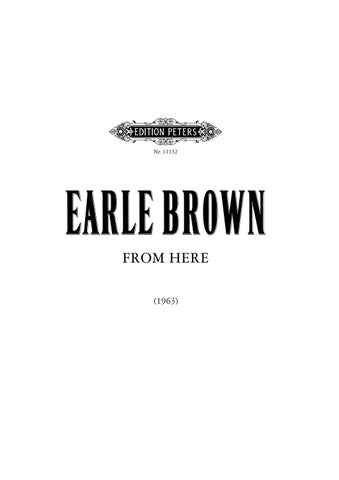 FROM HERE for orchestra and chorus (1963)

Duration: 10-20 minutes The conductor needs an arrow indicator with numbers 1-3 (provided with score) to show the

musicians which page to perform from.

He then responds with orchestral sound-events which seem

Spontaneous decisions in the performance of a work and

the possibility of the composed elements being “mobile” have been of primary interest to me for some time; the

In this manner of collaborative feedback the piece

former to an extreme degree in FOLIO (1952), and the latter,

begins its growth and process-development to become

the poetic and formal expression of itself which is

the concept of the elements being mobile was inspired by

unique to that particular performance. If the chorus is

the mobiles of Alexander Calder, in which, similar to this

not used in a performance the feedback still exists

work, there are basic units subject to innumerable different

between the conductor, the musicians and the various

relationships or forms. The concept of the work being

potentials inherent in the sound-events themselves.

The conductor(s) may conduct the events in any sequence

works of Jackson Pollock in the late 1940s, in which the

or juxtaposition, in changing tempi, loudness, and in

immediacy and directness of “contact” with the material is

general mold and form the piece. The inherent flexibility of

of great importance and produces such an intensity in the

the materials allows the work to constantly transform itself

working and in the result. The performance conditions of

and re-express its potential, while the sound materials and

these works are similar to a painter working spontaneously

characteristics which I have composed contain the essential

with a given palette.

“identity” which makes this work different from any other.

In FROM HERE , the instrumental sound materials are fully

I have felt that the conditions of spontaneity and mobility

composed for the most part. Of the 14 sound-events, 4

of elements which I have been working with create a more

urgent and intense “communication” throughout the

indicated only by drawings of the activity), the other 10

entire process, from composing to the final realization

sound-events being very specifically notated in regard

of a work. I prefer that each “final form,” which each

to the above qualities but in the rather flexible “time-

performance necessarily produces, be a collaborative

notation” that I have used since 1952. The chorus materials

adventure, and that the work and its conditions of human

are phonetic sounds and the vocal action is indicated

graphically but organized in sonic and texturally controlled “events.” The orchestral material may be performed apart

Either conductor may begin a performance with any event

intended to be performed independent of the orchestra.

on any page and may proceed from any page to any other page at any time, with or without repetitions or omissions

The conductor of the orchestra is primarily the one

of pages or events, remaining on any page or event as long

responsible for the “forming” of the work in performance.

as he wishes. Both conductors conduct simultaneously but

He may begin the performance with any one or more of

independently. This “independence” is of course conditioned

by the coexistence of the other group and, ultimately, is a

a cue to the chorus conductor to begin with a vocal event,

collaborative and dependent process. It must be understood

that this is one composition for essentially one group, a

within the process-evolution of the piece. After cueing the

performance of which is the product of sympathetic musical

chorus conductor, the conductor of the orchestra cannot be

collaboration between the two conductors in relation to the

exactly certain of which chorus event will be forthcoming.

composed material and its formal potential.

The numbers of the score pages to be played from are

natural deviations from the precise indications in the score

indicated to the musicians by a movable arrow on a placard

are acceptable and in fact integral to the nature of the

displaying the page numbers 1 to 3 — the number and

work. The result is the accurate expression of the actions of

arrow being clearly visible to all members of the group,

people when accuracy is not demanded but “conditioned”

and the arrow comfortably within reach of the conductor.

as a function within a human process.

It is suggested that the podium be wide enough (or that

enough music stands be used as a podium) for all score

are a generalized way of indicating instrumental activity and

conductor at all times during the performance. (In the

character and rhythm of the graphics, the verbal indication

of technique of articulations, and the approximate

the musicians without the necessity of page turns.)

frequencies covered by the rise and fall of the graphic line. All sounds are basically delicate, rambling and microtonal.

scoring of this piece because the availability of forms is

The conducting technique is basically one of cueing; the

based on letting go of the idea of metric accuracy. This is

notation precludes the necessity and function of “beat”

achieved through the notational system used in this work.

in the usual sense (although the conductor does indicate

This system, which I have called a “time-notation,” is a

the relative tempo). The page which contains the event

to be played is indicated by the arrow, as previously

clearly represents sound-relationships in the score as

explained. The number of the event to be performed is

I wish them to exist in performance, independent of a strict

indicated by the left hand of the conductor — one to five

It is a “time-notation” (now generally called “proportional

notation”) in that the performer’s relationship to the score,

speed and largeness of the down-beat as given with

and the actual sound in performance, is realized in terms

the right hand. Nearly all of the events in the score have

of the performer’s time-sense perception of the relationships

been assigned dynamic values. These are acoustically

system of additive units. The durations are extended visibly

sonority and balance and must be respected as written,

through their complete space-time of sounding and are

although the conductor may “over-ride” the indicated

precise relative to the space-time of the score. It is expected

dynamic values and raise or lower the over-all loudness.

The conception of the work is that the score presents

hesitation on the basis of their perceptions.

specific material having different characteristics, and that this material is subject to many inherent modifications,

It must be understood that the performance is not expected

such as modifications of combinations (event plus event),

to be a precise translation of the spatial relationships but

a relative and more spontaneous realization through the

during the performance. All events are always prepared by

of the spatial relationships. The resulting flexibility and

conductor; the size and rapidity of the down-beat implies

the loudness and speed with which the event is to be

affects only the event indicated by the fingers of the

performed. The conductor must, as with any notation, insist

left hand. Players whose parts do not contain events

on accurately articulated relationships from the rhythmic

signaled by the conductor’s left hand must remain

“shape” of phrase and pitch sequences in this work.

unaffected by his subsequent right-hand indications.

As soon as the conductor initiates (by left-hand event-

signal and right-hand down-beat) a new event that appears

the conductor may introduce a

fermata at any time during the performance, in any single

on the player’s part, the preceding event is automatically

event or combination of events. Both hands cupped

cancelled. No specific stop-signal is required. The player

towards the orchestra and held stationary indicates that all

simply discontinues the event he is playing and, without

musicians in that group should hold the sound or silence

break between events, begins to play the new one.

which they are at that moment performing, until the next sign from the conductor tells them either to cut off or to

With these procedures clearly understood by the con­

continue from the point of interruption. A cut-off is signaled

ductor and the musicians it is possible to achieve smooth

with both hands and must be followed by another event-

transitions and long lines of connected material of

signal from the left hand and a down-beat. To continue,

the conductor moves both hands from the “hold” position

impression derived from the score will be one of many

back to the body and then outward towards the orchestra,

palms up (as if giving the initiative back to the orchestra).

the numerous formal possibilities inherent in the work, and it is this realization, not the fragmentations, that must

the conductor may stop any event or

become the dominant characteristic of performance.

combination of events at any time during the performance. The normal, two-hand cut-off signal will silence his entire

group. Leaving the hands up will hold that silence until the

instrumental technique and register of the particular sound

signal to continue from the point of interruption is given. If

called for, i.e., a string sound to be played col legno tratto,

the hands do not remain up in “hold” position, the musicians

sul ponticello, with a dynamic of ffff, must be played as

are to expect another event-signal from the left hand,

loudly as possible regardless of the dynamic intensity

produced by the same dynamic marking in an instrument

all indications of dynamics are relative to the

of a different nature. Thus, a low C in the flute marked mod i fication of s i ng le eve nt :

signal affects the entire group. The conductor may wish,

register tone marked ffff in a clarinet. This simply means

however, to modify only one event among two or more

events being performed simultaneously. To do this he

available in that register of his instrument. The pppp

signals the number of the event to be modified with his

indicates that the sound is to be as soft as possible. All

left hand; then indicates the modification — a hold or

dynamic indications are “balanced” in this way, relative to

cut-off — with only his right hand. (Events not indicated

their acoustic functions within the event-structures and

by the fingers of the conductor’s left hand continue

the characteristics of the instruments employed in them. 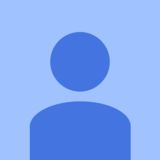