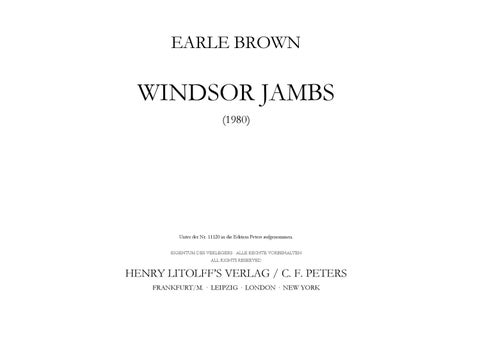 The conductor needs an arrow indicator

with numbers 1-4 (provided with the score).

WINDSOR JAMBS (1980) was commissioned by the Fromm

Music Foundation at Harvard and first performed by Speculum

systems per page. When the score is open and two of

be fragmented and juxtaposed on one

Musicae in a Composers’ Showcase concert at the Whitney

the pages can be observed by the conductor (and by the

Museum in January 1981. The work is dedicated to Paul Fromm.

musicians as well), the systems are indicated as:

(durations, rhythm, and dynamics free) or

Basically duets, in any order. They may

with events 3 and/or 5 superimposed.

The title, WINDSOR JAMBS , comes from a road sign I saw

somewhere in Connecticut or Western Massachusetts a few years ago. I liked the sound of it as a title and it has come

Solos: in any sequence; vary tempi. They may be fragmented and/or superimposed.

to express somewhat the polyphonic juxtapositions and Page 10

interweaving of melodic materials that occur in the work.

and/or superimposed with page 9 solos.

On potentially open-form pages, such as pages 1 and 2 The mezzo-soprano voice is used as an instrument within

of the score, (on which can be seen systems I, II, III, and

the orchestra rather than as a soloist in the usual way. The

IV), an arrow indicator is used to signal to the performers

voice color is associated with alto flute and bass clarinet

which of the four systems is to be conducted from. The

and the text is simply “vocalise” or phonetic.

specific “event” (1 to 5) is indicated by the left hand of the conductor; this signal is a preparation, followed by

Piano and marimba figures to be alternated

The large aspects of the continuity and form are fixed but

a right hand down-beat to signal the execution of the

(as instructed on the page) as a lead-in

there are areas of composed figures, chords, and textures

event. On non open-form pages such as pages 3 and

that are spontaneously sequenced and formed in the

process of performing. These areas occurring at various points in the structure of the work are composed “sound

NOTE: In the first five performances, systems I and II on

environments” of instrumental materials which can be

page 1 were mixed freely (open-form) but with event 6

The conducting technique is basically one of cueing; the

explored and expressed differently in each performance.

notation precludes the necessity and function of “beat” in

the usual sense (although the conductor does indicate

The essential “poetics” of the work, for me, were in creating

the relative tempo). The page which contains the event to

the warm rich sounds of voice, flute, and clarinet in relation

3. This treatment is obviously not obligatory, however.

to the more “classic” string trio sound and the percussive nature of the piano, vibraphone and marimba. The composi-

tion is really “about” these instrumental characteristics and

by the left hand of the conductor—one to five fingers.

A conventional (right-hand) down-beat initiates the activity. The relative speed and dynamic intensity with which

their potentials of being highly individualistic (soloistic) as well as becoming again an equal but essential element within the orchestral sound texture.

largeness of the down-beat as given with the right hand.

Nearly all of the events in the score have been assigned

towards the orchestra and held stationary indicates that all

signaled by the conductor’s left hand must remain

musicians in that group should hold the sound or silence

unaffected by his subsequent right-hand indications.

of instrumental and ensemble sonority and balance and

which they are at that moment performing, until the next

must be respected as written, although the conductor

As soon as the conductor initiates (by left-hand event-signal

may “over-ride” the indicated dynamic values and raise or

continue from the point of interruption. A cut-off is signaled

with both hands and must be followed by another event-

signal from the left hand and a down-beat. To continue, the

No specific stop-signal is required. The player simply

The “graphic” notations as in events on pages 1 and 16

conductor moves both hands from the “hold” position back

discontinues the event he is playing and, without break

are a generalized way of indicating instrumental activity

to the body and then outward towards the orchestra, palms

between events, begins to play the new one.

up (as if giving the initiative back to the orchestra). With these procedures clearly understood by the conductor

character and rhythm of the graphics, the verbal indica-

and the musicians it is possible to achieve smooth tran-

tion of technique of articulations, and the approximate

frequencies covered by the rise and fall of the graphic

bination of events at any time during the performance. The

sitions and long lines of connected material of extreme

line. All sounds are basically delicate and microtonal.

derived from the score will be one of many sporadic

The conception of the work is that the score presents

continue from the point of interruption is given. If the hands do

fragments. This wealth of fragments shows the numerous

specific material having different characteristics, and that

not remain up in “hold” position, the musicians are to expect

formal possibilities inherent in the work, and it is this

this material is subject to many inherent modifications,

another event-signal from the left hand, and a down-beat.

realization, not the fragmentations, that must become the

the conductor may stop any event or com-

such as modifications of combinations (event plus event), sequences, dynamics, and tempos, spontaneously created

during the performance. All events are always prepared by

affects the entire group. The conductor may wish, however,

to modify only one event among two or more events being

conductor; the size and rapidity of the down-beat implies

performed simultaneously. To do this he signals the number

the loudness and speed with which the event is to be

of the event to be modified with his left hand; then indicates

performed. The conductor must, as with any notation, insist

the modification — a hold or cut-off — with only his right

on accurately articulated relationships from the rhythmic

hand. (Events not indicated by the fingers of the conductor’s

“shape” of phrase and pitch sequences in this work.

left hand continue to proceed normally.) It is absolutely

the conductor may introduce a

fermata at any time during the performance, in any single

right hand affects only the event indicated by the fingers

event or combination of events. Both hands cupped

of the left hand. Players whose parts do not contain events

Karate chop a downbeat (hand and fingers vertical, edge of hand toward the orchestra section). Can be used for a single, instantaneous attack.]