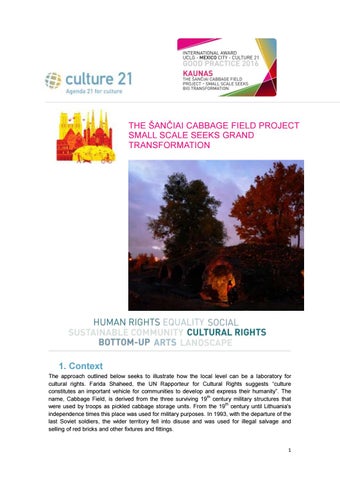 1. Context The approach outlined below seeks to illustrate how the local level can be a laboratory for cultural rights. Farida Shaheed, the UN Rapporteur for Cultural Rights suggests “culture constitutes an important vehicle for communities to develop and express their humanity”. The th name, Cabbage Field, is derived from the three surviving 19 century military structures that th were used by troops as pickled cabbage storage units. From the 19 century until Lithuania&#39;s independence times this place was used for military purposes. In 1993, with the departure of the last Soviet soldiers, the wider territory fell into disuse and was used for illegal salvage and selling of red bricks and other fixtures and fittings.

Since 2014, the Cabbage Field parcel of land became a site for small‒scale land reclamation, where the subject is not a developer or public body but rather an action of local people; working from the bottom-up to person‒up; from the community to other communities. So there might be a Cabbage Field in your community too: a public parcel of land that is overlooked, dumped‒upon and where non action is a tactic of preparation for its transfer from state asset to private benefit. The first task of reclamation is an act of imagination: what if our land could be a site for the agency of residents and for all the people in the neighbourhood to flourish?

THE CUT AND PASTE APPROACH OF MUNICIPAL CULTURAL STRATEGIES IS TO WORK FROM THE TOP –DOWN TOWARDS AUDIENCES AND TOURISTS. THE BLIND SPOT IS CULTURE AS HOME-GROWN AND HOME-SPUN FROM THE PERSON‒UP. The US artist, Gordon Matta Clarke went around New York buying 1 square foot plots and his widow used to remind everyone that Gordon didn‟t think inside the box nor outside the box, but 2 acted as if there was no box! That made sense for the Cabbage Field, being a 13,000 m parcel of land and owned by the Municipality. But its magic is not its physical features alone but rather the ability of a group of residents to develop over time an incremental cultural practice. The Cabbage Field is located in the city district called Šančiai (c. 20,000 inhabitants), which became home to invading armies of the Tzars, Nazis and Soviets. Between 1919 to 1940, the high period of Modernism in Kaunas, it was the temporary Capital of the Independent Lithuania. When the world celebrated liberation in 1945, Lithuania returned to Soviet domination until the Singing Revolution of 1989 and the return of nations‟ independence. In 2014, a small group of local cultural practitioners led by Vita Gelūnienė and Ed Carroll were drawn to the potency of Šančiai, where most of them lived and its image in the mind of city residents as a place of vagabonds, of wheelers and dealers, of bohemians and saunas!

2. Kaunas and culture Kaunas published it new City Cultural Strategy in 2017 and it projects out to 2027. It seeks to make Kaunas a centre of modern participatory culture and a home to an intelligent and happy people. Since 2001, the city has lost twenty-percent of its population due to emigration and now has a population of c. 300,000 inhabitants. Now it seeks to use culture to retrieve the energy and spirit that once made it a temporary capital. It„s an idealistic document that looks for renewal by placing culture and creativity at the heart of sustainable development. The hope is to make Kaunas live again so that it won‟t be erased in European history but instead hold a light for the future of Europe. The vision of the Kaunas City culture strategy is that the identity and well-being of each city dweller will be supported. Through a sustainable development framework, Kaunas will emerge as a modern city, where art, culture and heritage that reflects the richness of the local population and enables civic and social responsibility, creativity, and quality of life to unfold.

AGENDA 21 FOR CULTURE CONTENDS THAT WITHOUT CULTURE THERE IS NO FUTURE FOR CITIES Kaunas City Cultural Strategy posits a new cultural imaginary to make the City reflect (i) inclusive culture, contemporary art, innovation and design, (ii) a creative, modern and cultural offer, (iii) a cultural life that is brimming over, (iv) cultural institutions supported by the City and (v) a potential to be a European and Baltic Region leader again. But cities need more than big intentions and exciting plans. Community needs to be strengthened and while top-down institutional-led is flavour of the day, community and bottomup community initiatives remain under developed. Communities love culture because it can give expression to the invisible dimensions; the unheard voice and the silent contradictions. The pulse of culture today is throbbing in communities. Community culture is overlooked as a site for the rebirth of culture vitality and community resilience except as an object of urban development. The Cabbage Field proffers the community as subject with its power to feel and transform one‟s self in relation to others, to renew and reframe institutions, and to shape and reshape the value base of this city.

3. Implementing Cabbage Field Objectives General Objective The Cabbage Field seeks to retrieve and refresh the bonds that people have with each other. Art and culture can help to uncover the values (motivations), reshape the present (praxis) and reveal that cultural rights that can enrich democratic accountability and citizen participation. Practically the work  Seeks transformative approaches to community formation;  Finds new tactics to activate the cultural potency and vitality of people and place;  Makes new cultural contacts that also are driven by equality and human rights so as to add value to exchanging and calibrating the local with the experience of others.

Specific Objective To build capacity to overcome the invisibility, lack of articulation, and absence of protection and fulfilment of cultural rights of communities by  Working on location with people and environment. 2

Cellar before and after. Photo: R. Scerbauskis 2015

A LESSON EMERGING IS THAT CULTURAL RIGHTS WILL REMAIN THE CINDERELLA OF HUMAN RIGHTS UNLESS COMMUNITIES ARE SEEN AS RIGHTS HOLDERS.

Impacts on the local government The Cabbage Field highlighted for the first time the priorities of Agenda 21 for Culture and the cultural rights of communities. At the level of aspiration community culture is now embedded in the City‟s Cultural Strategy. Community culture is also signalled as a priority in the City‟s application to be the 2022 European Capital of Culture. The next steps will be to make these aspirations real. The participation of rights holders in cultural life requires that they are the key actors in cultural policy formation and its implementation. The establishment of a new legal association, the Lower Šančiai Community Association – “Ţemųjų Šančių bendruomene” – shows there is an interface for top-down aspirations. This Association is focused on community development, self-organisation, civil society, and local democracy. Every month about 25 people gather to talk about hot issues and to plan specific activities in the area. This Association has a very active Facebook page with 1,200 members and produces annually a creative celebration called „Šančines‟.

THE CABBAGE FIELD HELPS TO OPEN-UP ARTS AND CULTURAL WORK FROM THE COMMUNITY THAT ALSO REFRESHES CIVIL SOCIETY. Impact on culture and local cultural actors of the city/territory Community culture thrives when it happens in the dark and away from the limelight. It is the classical cultural iceberg where most of its substance is not visible and below the waterline. When Dutch artist, Jeanne van Heeswijk visited Kaunas she shared a tactic she called working with the “experts-on-location”. These are local people who are the experts for this place e.g. dog walkers, etc. To help identify these people we camped on site from sunrise to sunset and observed the flows of people and used creative forms of inquiry. After doing this three times during the summer, we co-created a collective action to express our „findings‟ and presented it back to locals. All these things helped identify local people who had real expertise that could be useful in future actions. For example, this action sowed a seed with residents of the social housing that came alive only two years later when we co-operated on the renovation of the roof and floor of a dedicated social space. Impact on the territory and its population Residents who have participated in the process have increased their capacity and agency to work together. New channels have opened between residents, creative practitioners, social workers and environmentalists. For example, through the collaboration with the Kaunas Forestry and Engineering College, workshops were delivered that brought new awareness of the richness of the plant and tree life in the Cabbage Field. The workshops and the expertise of the College helped to identify ways in which a polluted landscape interacts with a community and how it can be worked with and what can emerge as the environmental potency of people, place and things. 1.2. Transversal impacts It is important that what is happening here also has resonance to what others are doing in other places. What is emerging is a practice site that is linked nationally and internationally and focused on networked practice to specific contexts including:  Jakaterina Lavinec and the Šnipiškės Community (Vilnius); 6

Jeanne van Heewswijk and the Afrikaaner Cooperative (Rotterdam); Jordi Pascaul and the UCLG Right to the City Platform; Prosper Wanner and Julie De Muer and the Faro Convention Network.

5. Further information The city of Kaunas was nominated for the second &#39;UCLG International Award - Mexico City Culture 21&#39; (January-May 2016). The awards jury produced a final report in June 2016 and asked the UCLG Committee on Culture to promote this project as a practical example of the implementation of Agenda 21 for Culture, and as a special mention of the second edition of the Award. Good practice text published in February, 2017. This factsheet was put together by Ed Carroll and Vita Gelūnienė. Contact: vitaanded (at) gmail.com 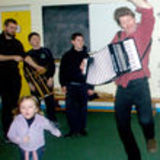