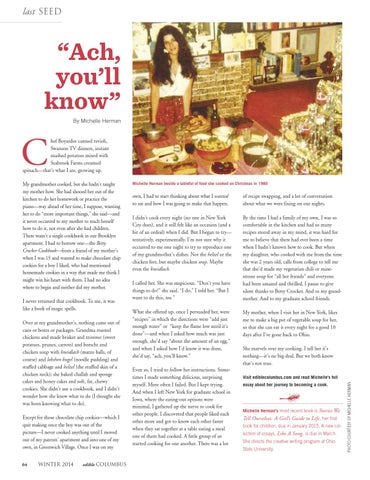 I never returned that cookbook. To me, it was like a book of magic spells. Over at my grandmother’s, nothing came out of cans or boxes or packages. Grandma roasted chickens and made brisket and tzimmes (sweet potatoes, prunes, carrots) and borscht and chicken soup with kneidlach (matzo balls, of course) and lokshen kugel (noodle pudding) and stuffed cabbage and helzel (the stuffed skin of a chicken neck); she baked challah and sponge cakes and honey cakes and soft, fat, chewy cookies. She didn’t use a cookbook, and I didn’t wonder how she knew what to do (I thought she was born knowing what to do). Except for those chocolate chip cookies—which I quit making once the boy was out of the picture—I never cooked anything until I moved out of my parents’ apartment and into one of my own, in Greenwich Village. Once I was on my 64

own, I had to start thinking about what I wanted to eat and how I was going to make that happen.

of recipe swapping, and a lot of conversation about what we were fixing on our nights.

I didn’t cook every night (no one in New York City does), and it still felt like an occasion (and a bit of an ordeal) when I did. But I began to try— tentatively, experimentally. I’m not sure why it occurred to me one night to try to reproduce one of my grandmother’s dishes. Not the helzel or the chicken feet, but maybe chicken soup. Maybe even the kneidlach.

By the time I had a family of my own, I was so comfortable in the kitchen and had so many recipes stored away in my mind, it was hard for me to believe that there had ever been a time when I hadn’t known how to cook. But when my daughter, who cooked with me from the time she was 2 years old, calls from college to tell me that she’d made my vegetarian chili or minestrone soup for “all her friends” and everyone had been amazed and thrilled, I pause to give silent thanks to Betty Crocker. And to my grandmother. And to my graduate school friends.

I called her. She was suspicious. “Don’t you have things to do?” she said. “I do,” I told her. “But I want to do this, too.” What she offered up, once I persuaded her, were “recipes” in which the directions were “add just enough water” or “keep the flame low until it’s done”—and when I asked how much was just enough, she’d say “about the amount of an egg,” and when I asked how I’d know it was done, she’d say, “ach, you’ll know.” Even so, I tried to follow her instructions. Sometimes I made something delicious, surprising myself. More often I failed. But I kept trying. And when I left New York for graduate school in Iowa, where the eating-out options were minimal, I gathered up the nerve to cook for other people. I discovered that people liked each other more and got to know each other faster when they sat together at a table eating a meal one of them had cooked. A little group of us started cooking for one another. There was a lot

My mother, when I visit her in New York, likes me to make a big pot of vegetable soup for her, so that she can eat it every night for a good 10 days after I’ve gone back to Ohio. She marvels over my cooking. I tell her it’s nothing—it’s no big deal. But we both know that’s not true. Visit ediblecolumbus.com and read Michelle’s full essay about her journey to becoming a cook.

Michelle Herman’s most recent book is Stories We Tell Ourselves. A Girl’s Guide to Life, her first book for children, due in January 2015. A new collection of essays, Like

A Song, is due in March.

She directs the creative writing program at Ohio State University.

My grandmother cooked, but she hadn’t taught my mother how. She had shooed her out of the kitchen to do her homework or practice the piano—way ahead of her time, I suppose, wanting her to do “more important things,” she said—and it never occurred to my mother to teach herself how to do it, not even after she had children. There wasn’t a single cookbook in our Brooklyn apartment. I had to borrow one—the Betty Crocker Cookbook—from a friend of my mother’s when I was 15 and wanted to make chocolate chip cookies for a boy I liked, who had mentioned homemade cookies in a way that made me think I might win his heart with them. I had no idea where to begin and neither did my mother. 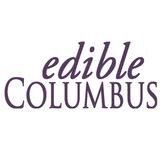