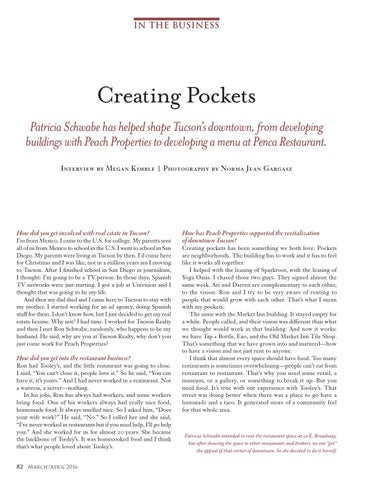 How did you get involved with real estate in Tucson?

I’m from Mexico. I came to the U.S. for college. My parents sent all of us from Mexico to school in the U.S. I went to school in San Diego. My parents were living in Tucson by then. I’d come here for Christmas and I was like, not in a million years am I moving to Tucson. After I finished school in San Diego in journalism, I thought: I’m going to be a TV person. In those days, Spanish TV networks were just starting. I got a job at Univision and I thought that was going to be my life. And then my dad died and I came here to Tucson to stay with my mother. I started working for an ad agency, doing Spanish stuff for them. I don’t know how, but I just decided to get my real estate license. Why not? I had time. I worked for Tucson Realty and then I met Ron Schwabe, randomly, who happens to be my husband. He said, why are you at Tucson Realty, why don’t you just come work for Peach Properties?

How did you get into the restaurant business?

Ron had Tooley’s, and the little restaurant was going to close. I said, “You can’t close it, people love it.” So he said, “You can have it, it’s yours.” And I had never worked in a restaurant. Not a waitress, a server—nothing. In his jobs, Ron has always had workers, and some workers bring food. One of his workers always had really nice food, homemade food. It always smelled nice. So I asked him, “Does your wife work?” He said, “No.” So I called her and she said, “I’ve never worked in restaurants but if you need help, I’ll go help you.” And she worked for us for almost 20 years. She became the backbone of Tooley’s. It was homecooked food and I think that’s what people loved about Tooley’s. 82  March/April 2016

How has Peach Properties supported the revitalization of downtown Tucson?

Creating pockets has been something we both love. Pockets are neighborhoods. The building has to work and it has to feel like it works all together. I helped with the leasing of Sparkroot, with the leasing of Yoga Oasis. I chased those two guys. They signed almost the same week. Ari and Darren are complementary to each other, to the vision. Ron and I try to be very aware of renting to people that would grow with each other. That’s what I mean with my pockets. The same with the Market Inn building. It stayed empty for a while. People called, and their vision was different than what we thought would work in that building. And now it works: we have Tap + Bottle, Exo, and the Old Market Inn Tile Shop. That’s something that we have grown into and matured—how to have a vision and not just rent to anyone. I think that almost every space should have food. Too many restaurants is sometimes overwhelming—people can’t eat from restaurant to restaurant. That’s why you need some retail, a museum, or a gallery, or something to break it up. But you need food. It’s true with our experience with Tooley’s. That street was doing better when there was a place to go have a lemonade and a taco. It generated more of a community feel for that whole area.

Patricia Schwabe intended to rent the restaurant space at 50 E. Broadway, but after showing the space to other restaurants and brokers, no one “got” the appeal of that corner of downtown. So she decided to do it herself. 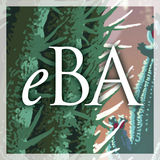