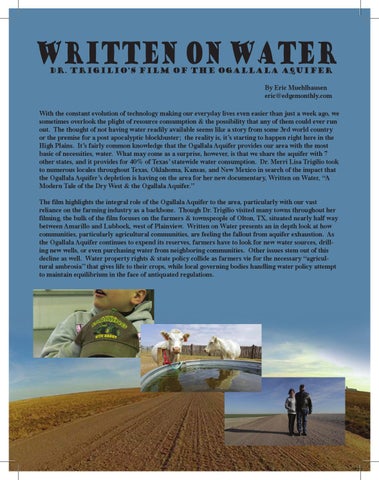 Written on Water Dr. Trigilio’s Film of the Ogallala Aquifer By Eric Muehlhausen eric@edgemonthly.com With the constant evolution of technology making our everyday lives even easier than just a week ago, we sometimes overlook the plight of resource consumption &amp; the possibility that any of them could ever run out. The thought of not having water readily available seems like a story from some 3rd world country or the premise for a post apocalyptic blockbuster; the reality is, it’s starting to happen right here in the High Plains. It’s fairly common knowledge that the Ogallala Aquifer provides our area with the most basic of necessities, water. What may come as a surprise, however, is that we share the aquifer with 7 other states, and it provides for 40% of Texas’ statewide water consumption. Dr. Merri Lisa Trigilio took to numerous locales throughout Texas, Oklahoma, Kansas, and New Mexico in search of the impact that the Ogallala Aquifer’s depletion is having on the area for her new documentary, Written on Water, “A Modern Tale of the Dry West &amp; the Ogallala Aquifer.” The film highlights the integral role of the Ogallala Aquifer to the area, particularly with our vast reliance on the farming industry as a backbone. Though Dr. Trigilio visited many towns throughout her filming, the bulk of the film focuses on the farmers &amp; townspeople of Olton, TX, situated nearly half way between Amarillo and Lubbock, west of Plainview. Written on Water presents an in depth look at how communities, particularly agricultural communities, are feeling the fallout from aquifer exhaustion. As the Ogallala Aquifer continues to expend its reserves, farmers have to look for new water sources, drilling new wells, or even purchasing water from neighboring communities. Other issues stem out of this decline as well. Water property rights &amp; state policy collide as farmers vie for the necessary “agricultural ambrosia” that gives life to their crops, while local governing bodies handling water policy attempt to maintain equilibrium in the face of antiquated regulations. 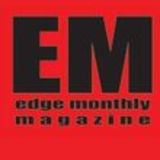