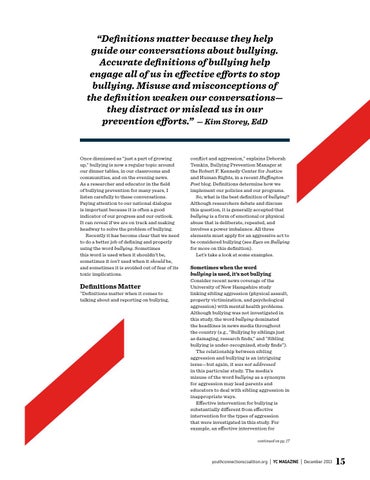 Once dismissed as “just a part of growing up,” bullying is now a regular topic around our dinner tables, in our classrooms and communities, and on the evening news. As a researcher and educator in the field of bullying prevention for many years, I listen carefully to these conversations. Paying attention to our national dialogue is important because it is often a good indicator of our progress and our outlook. It can reveal if we are on track and making headway to solve the problem of bullying. Recently it has become clear that we need to do a better job of defining and properly using the word bullying. Sometimes this word is used when it shouldn’t be, sometimes it isn’t used when it should be, and sometimes it is avoided out of fear of its toxic implications.

“Definitions matter when it comes to talking about and reporting on bullying,

conflict and aggression,” explains Deborah Temkin, Bullying Prevention Manager at the Robert F. Kennedy Center for Justice and Human Rights, in a recent Huffington Post blog. Definitions determine how we implement our policies and our programs. So, what is the best definition of bullying? Although researchers debate and discuss this question, it is generally accepted that bullying is a form of emotional or physical abuse that is deliberate, repeated, and involves a power imbalance. All three elements must apply for an aggressive act to be considered bullying (see Eyes on Bullying for more on this definition). Let’s take a look at some examples. Sometimes when the word bullying is used, it’s not bullying Consider recent news coverage of the University of New Hampshire study linking sibling aggression (physical assault, property victimization, and psychological aggression) with mental health problems. Although bullying was not investigated in this study, the word bullying dominated the headlines in news media throughout the country (e.g., “Bullying by siblings just as damaging, research finds,” and “Sibling bullying is under-recognized, study finds”). The relationship between sibling aggression and bullying is an intriguing issue—but again, it was not addressed in this particular study. The media’s misuse of the word bullying as a synonym for aggression may lead parents and educators to deal with sibling aggression in inappropriate ways. Effective intervention for bullying is substantially different from effective intervention for the types of aggression that were investigated in this study. For example, an effective intervention for continued on pg. 17