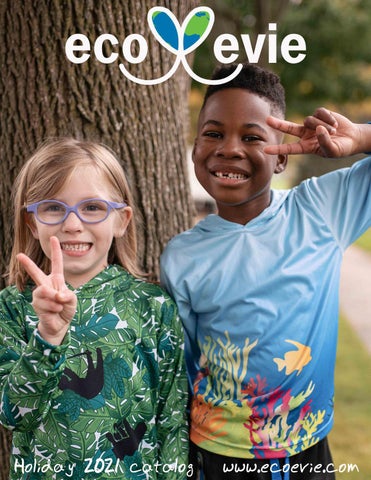 A girl on a mission to change the world Evie was diagnosed with Autism at a young age, and animals have always been a high interest topic for her. Today, Evie has become a walking encyclopedia of animal knowledge, and loves learning and sharing all that she can about different species of animals. All of our featured designs are focused on animals of Evie&#39;s choosing, and she has a lot more animals she plans on adding to our line in the future!

Join us on our mission! EcoEvie&#39;s mission is to promote our world&#39;s wellbeing, making garments entirely from recycled water bottles, and donating a portion of each sale to conservation efforts. Help us help our earth, one water bottle at a time!

At EcoEvie, all of our shirts are made with... -100% REPREVE® recycled polyester made from post-consumer plastic water bottles -Soft textured thread on the inside for extra comfort on sensitive skin -Easy to care for fibers, just machine wash and tumble dry -every part produced in the USA

The Snow Leopard&#39;s big build and massive leaping power come in handy for navigating the mountainous regions they live in. Not only do they use their tail to help them keep their balance on steep mountainsides, but they snuggle with their tail at night to keep them warm! Snow leopards are in Vulnerable status, and hunting by humans and habitat loss are causing their numbers to decrease. Snow leopard kids long sleeve hooded shirt $49 Snow leopard womens long sleeve scoop neck shirt $59

Tiger&#39;s stripes are unique to each individual, and their stripes even carry over on to their skin! Tiger numbers are rising again, but they are not out of the woods just yet. There are currently less than 4,000 tigers left in the wild across all 6 remaining subspecies, with 3 subspecies already extinct- the Javan tiger, the Bali Tiger, and Caspian tiger.

Coral is an animal! This living, breathing marine animal teems in the hundreds of thousands to form reefs, which house 25% of all known marine species despite only occupying .1% of the ocean. The Great Barrier Reef in Australia has been growing for 20,000 years and can be seen from space! But coral is in a severe decline, moreso than any animal in the past 20 years, and its time to act now to protect our oceans!

Sloth Sloths are an undeniably lovable animal! From their slo-motion movements to snoozing for 15-20 hours a day, its hard not to fall in love with their carefree lifestyle! But sloth numbers are completely dependant on the health of Central and South American Rainforests, which have been losing ground literally in the battle of deforestation. There are 2 types of sloth- 2 toed and 3 toed- and 6 species, 2 of which are on the IUCN endangered list. Sloths play a critical role in rainforest ecosystems, and we need to act now to protect their precious home.

Eleph ant Elephants are majestic creatures, in fact, they are the largest mammal on earth! Just recently, the 2nd species of African elephant- the African Forest Elephant- was listed as Critically Endangered. The African Savanna Elephant and the Asian Elephant were already listed in Endangered status. African elephants biggest threat is still poaching, mainly for their tusks, while the Asian elephant faces habitat loss which causes competition with humans for resources they need to survive.

Manatees are relatives of Elephants, just the aquatic version! Manatees are really large, and slow moving. Also called sea cows, manatees eat 10% of their body weight each day! Back in the 1970&#39;s, Manatees were disappearing quickly. With a lot of help and awareness, numbers have been increasing slowly over the last several decades. In 2017, Manatees were actually down-listed from Endangered to Threatened status, but they are not in the clear yet. Recent cold snaps have pushed water temps lower than these mammals can handle, and between that, frequent boat strikes, and diminishing sea grass, these animals are back in the spotlight.

Monarch Butterfly Monarch Butterflies are amazing creatures, and yet their numbers continue to decrease because of climate change and habitat loss. Monarchs migrate from as far north as parts of Canada and all throughout the US all the way to Mexico every year, pollinating along the way.

Sea Turtles are much loved by animal enthustiasts everywhere, and they need our help now more than ever. Our shirt design has 7 turtles on it, representing the 7 species of sea turtle- Loggerhead, Leatherback, Kemp&#39;s Ridley, Olive Ridley, Green, Hawksbill, and Flatback. Although these species live in all around the world, there are common threats that are endangering them- plastic pollution, accidental catching, climate change, and poaching.

There is no shortage of endangered animals, and Evie wants to share some of her favorites with you! Each animal is its own mini collection, with hoodies, tanks, and tank dresses in each design. Show these animals some love and with your purchase, we will donate toward animal conservation programs!

Black Rhinoceros Bring out your tough side in our Black Rhinoceros hooded shirt. Rhino numbers are on the rise from its lowest point 20 years ago, proving conservation efforts work. Still, the Black Rhino remains in critically endangered status, with just over 5,000 animals in the wild today, and remains a target of poaching for its horns. Available in Bright Blue (shown here) and Natural (Grey/Black) $49 Also available in Rainbow tank dress $39 and tank tops $29

Amur Leopard Don&#39;t get caught stuck in a tree without your Amur Leopard hooded shirt, this cat is an excellent climber. Amur Leopards are the world&#39;s rarest cat species, and are critically endangered with less than 100 left in the wild. Available in Bright Orange (shown here) and Natural (Tan/Black) $49 Also available in Rainbow tank dress $39 and tank tops $29

Grevy’s Zebra Show off your wild side with our Grevy&#39;s Zebra hooded shirt. Zebras were hunted for their beautiful striped skins for many years, and despite hunting bans to protect them, they are still in endangered status today mostly due to habitat loss. Available in Bright Purple (shown here) and Natural (Black/White) $49 Also available in Rainbow tank dress $39 and tank tops $29

Eastern Indigo Snake Give your Eastern Indigo Snake shirt a home and help us fight habitat loss for this species. This snake is native to southern parts of the US, and is the longest snake in North America at lengths between 5-7 ft long! Available in Bright Lime (shown here) and Natural (Dark Teal) $49 Also available in Rainbow tank dress $39 and tank tops $29

Pangolin Use your scales to defend yourself from the outside world in our pangolin hoodie. Known as the &quot;scaly anteater&quot;, pangolins are the most trafficked mammal in the world. Available in Bright Pink (shown here) and Natural (Grey/Black) $49 Also available in tank tops $29

Giraffe Make sure to stick your neck out for this incredible animal in our giraffe hoodie. Giraffe numbers have been silently decreasing for years due to poaching and habitat loss, and its important we shed light on this iconic species. Available in Bright Teal (shown here) or Natural (Brown/Tan) $49 Also available in Rainbow tank dress $39 and tank tops $29

Rainbow tank dress Our rainbow tank dresses are amazingly comfortable, and they have pockets!!! This is the perfect go everywhere dress! Makes a great swim cover up too! $39

Thank you for supporting our small business! Love and animals, Evie and Kelly

We brought back all of our special limited edition pieces for holiday shopping! Grab them now before they are gone for good!