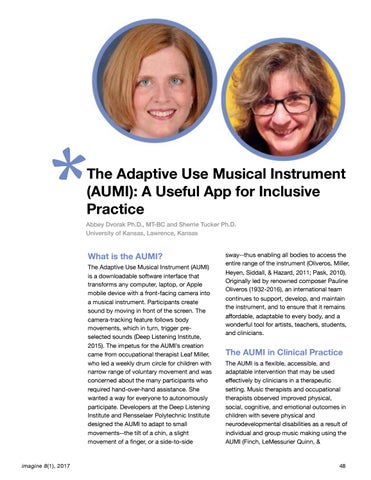 The Adaptive Use Musical Instrument (AUMI): A Useful App for Inclusive Practice

What is the AUMI? The Adaptive Use Musical Instrument (AUMI) is a downloadable software interface that transforms any computer, laptop, or Apple mobile device with a front-facing camera into a musical instrument. Participants create sound by moving in front of the screen. The camera-tracking feature follows body movements, which in turn, trigger preselected sounds (Deep Listening Institute, 2015). The impetus for the AUMI’s creation came from occupational therapist Leaf Miller, who led a weekly drum circle for children with narrow range of voluntary movement and was concerned about the many participants who required hand-over-hand assistance. She wanted a way for everyone to autonomously participate. Developers at the Deep Listening Institute and Rensselaer Polytechnic Institute designed the AUMI to adapt to small movements--the tilt of a chin, a slight movement of a finger, or a side-to-side

sway--thus enabling all bodies to access the entire range of the instrument (Oliveros, Miller, Heyen, Siddall, &amp; Hazard, 2011; Pask, 2010). Originally led by renowned composer Pauline Oliveros (1932-2016), an international team continues to support, develop, and maintain the instrument, and to ensure that it remains aﬀordable, adaptable to every body, and a wonderful tool for artists, teachers, students, and clinicians.

The AUMI in Clinical Practice The AUMI is a flexible, accessible, and adaptable intervention that may be used eﬀectively by clinicians in a therapeutic setting. Music therapists and occupational therapists observed improved physical, social, cognitive, and emotional outcomes in children with severe physical and neurodevelopmental disabilities as a result of individual and group music making using the AUMI (Finch, LeMessurier Quinn, &amp;

In the 2017 imagine.magazine, over 60 authors explore the “what, when, with whom, where, why, how, and how much” questions regarding technology and interactive media use in music therapy practice with young children of all abilities. Find out through text, images, drawings, audio/video recordings, and hyperlinks to additional resources how technology and interactive media can offer new opportunities for learning, communication, collaboration, and creativity. Additional early childhood music therapy resources available at www.imagine.musictherapy.biz. 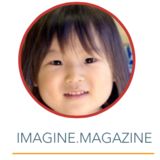