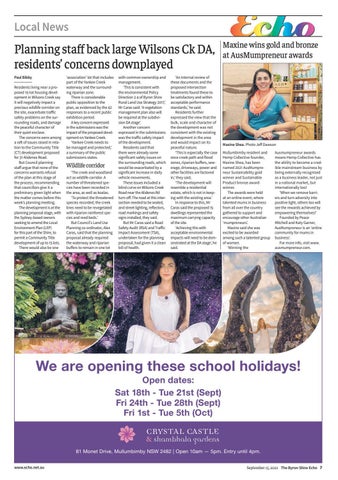 ōëŕŕĶŕīƆƐëǔćëĈŊōëſīĕÉĶōƆşŕƆ!Ŋ'ǽ ſĕƆĶĎĕŕƐƆȜĈşŕĈĕſŕƆĎşƱŕżōëƷĕĎ Paul Bibby Residents living near a proposed 15-lot housing development in Wilsons Creek say it will negatively impact a precious wildlife corridor on the site, exacerbate traffic safety problems on the surrounding roads, and damage the peaceful character of their quiet enclave. The concerns were among a raft of issues raised in relation to the Community Title (CT) development proposed for 31 Alidenes Road. But Council planning staff argue that none of the concerns warrants refusal of the plan at this stage of the process, recommending that councillors give it a preliminary green light when the matter comes before this week’s planning meeting. The development is at the planning proposal stage, with the Sydney-based owners seeking to amend the Local Environment Plan (LEP) for this part of the Shire, to permit a Community Title development of up to 15 lots. There would also be one

‘association’ lot that includes part of the Yankee Creek waterway and the surrounding riparian zone. There is considerable public opposition to the plan, as evidenced by the 42 responses to a recent public exhibition period. A key concern expressed in the submissions was the impact of the proposed development on Yankee Creek. ‘Yankee Creek needs to be managed and protected,’ a summary of the public submissions states.

ÉĶōĎōĶĪĕĈşſſĶĎşſ ‘The creek and woodland act as wildlife corridor. A number of threatened species have been recorded in the area, as well as koalas. ‘To protect the threatened species recorded, the creek lines need to be revegetated with riparian rainforest species and reed beds.’ But Council’s Land Use Planning co-ordinator, Alex Caras, said that the planning proposal already required the waterway and riparian buffers to remain in one lot

with common ownership and management. ‘This is consistent with the environmental Policy Direction 2.4 of Byron Shire Rural Land Use Strategy 2017,’ Mr Caras said. ‘A vegetation management plan also will be required at the subdivision DA stage’. Another concern expressed in the submissions was the traffic safety impact of the development. Residents said that there were already some significant safety issues on the surrounding roads, which would be exacerbated by a significant increase in daily vehicle movements. These issues included a blind curve on Wilsons Creek Road near the Alidenes Rd turn-off. The road at this intersection needed to be sealed, and street lighting, reflectors, road markings and safety signs installed, they said.  But Mr Caras said a Road Safety Audit (RSA) and Traffic Impact Assessment (TSA), undertaken for the planning proposal, had given it a clean bill of health.

‘An internal review of these documents and the proposed intersection treatments found these to be satisfactory and within acceptable performance standards,’ he said. Residents further expressed the view that the bulk, scale and character of the development was not consistent with the existing development in the area and would impact on its peaceful nature. ‘This is especially the case once creek path and flood zones, riparian buffers, sewerage, driveways, power and other facilities are factored in,’ they said. ‘The development will resemble a residential estate, which is not in keeping with the existing area.’ In response to this, Mr Caras said the proposed 15 dwellings represented the maximum carrying capacity of the site. ‘Achieving this with acceptable environmental impacts will need to be demonstrated at the DA stage’, he said.

Maxine Shea. Photo Jeff Dawson Mullumbimby resident and Hemp Collective founder, Maxine Shea, has been named 2021 AusMumpreneur Sustainability gold winner and Sustainable Product bronze award winner. The awards were held at an online event, where talented mums in business from all over the country gathered to support and encourage other Australian ‘mumpreneurs’. Maxine said she was excited to be awarded among such a talented group of women. ‘Winning the

Ausmumpreneur awards means Hemp Collective has the ability to become a credible mainstream business by being externally recognised as a business leader, not just in a national market, but internationally too! ‘When we remove barriers and turn adversity into positive light, others too will see the rewards achieved by empowering themselves!’ Founded by Peace Mitchell and Katy Garner, AusMumpreneur is an ‘online community for mums in business’. For more info, visit www. ausmumpreneur.com.