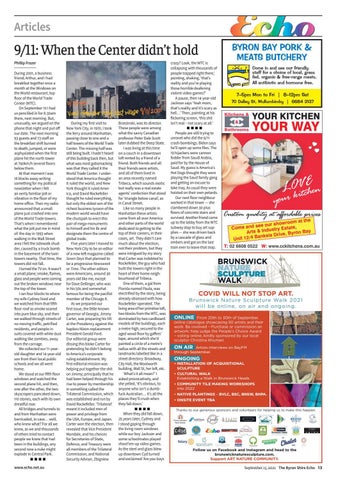 9/11: When the Center didn’t hold Phillip Frazer During 2001, a business friend, Arthur, and I had breakfast together once a month at the Windows on the World restaurant, top floor of the World Trade Center (WTC). On September 10 I had us pencilled in for 8.30am there, next morning. But, unusually, we argued on the phone that night and put off our date. The next morning 93 guests and 73 staff on the breakfast shift burned to death, jumped, or were asphyxiated when the first plane hit the north tower at 790km/h several floors below them. At that moment I was 18 blocks away writing something for my political newsletter when I felt an eerily familiar jolt or vibration in the floor of my home office. Then my radio announced that a small plane just crashed into one of the World Trade towers. That’s when I remembered what the jolt put me in mind of: the day in 1993 when walking in the Wall Street area I felt the sidewalk shudder, caused by a truck bomb in the basement of the twin towers nearby. That time, the towers did not fall. I turned the TV on. It wasn’t a small plane; smoke, flames, glass and people were coming out the broken windows near the top of the tower. I ran four blocks to where my wife Cydney lived and we watched from that fifth floor roof as smoke soared into pure blue sky, and then we walked through streets of no moving traffic, petrified residents, and people in suits covered with white dust walking like zombies, away from the carnage. We collected our 11-yearold daughter and 14-year-old son from their local public schools and we all went home. We stood at our fifth floor windows and watched the second plane hit, and then, one after the other, the two skyscrapers pancaked down, 110 stories, each with its own dreadful roar. All bridges and tunnels to and from Manhattan were barricaded, in case… well, who knew what? For all we knew, as we and thousands of others tried to contact people we knew that had been in the buildings, any second now a nuke might explode in Central Park. www.echo.net.au

During my first visit to New York City, in 1970, I took the ferry around Manhattan, passing close to one and a half towers of the World Trade Center. The missing half was still being built. I hadn’t heard of this building back then, but what was most gobsmacking was that they called it the World Trade Center. I understood that America thought it ruled the world, and New York thought it ruled America, and David Rockefeller thought he ruled everything, but only the oldest son of the richest business tycoon of the modern world would have the chutzpah to erect this pair of mega-monuments to himself and his ilk and designate them the centre of global trade. Five years later I moved to New York City to be an editor of a new-left magazine called Seven Days that planned to be a progressive Newsweek or Time. The other editors were Americans, around 30 years old like me, except for Dave Dellinger, who was in his 50s and somewhat famous for being the pacifist member of the Chicago 8. As we prepared our first issue, the little-known governor of Georgia, Jimmy Carter, was preparing his tilt at the Presidency against the hapless Nixon-replacement President Gerald Ford. Our editorial group were dissing this bloke Carter for pretending he didn’t belong to America’s corporate ruling establishment. My first editorial mission was helping put together the shit on Jimmy; principally that he had been helped through his rise to power by membership in something called the Trilateral Commission, which was established and run by David Rockefeller. ‘Trilateral’ meant it included men of power and privilege from the USA, Europe, and Japan. Carter won the election, then revealed that Vice President Mondale, and his choices for Secretaries of State, Defence, and Treasury were all members of the Trilateral Commission, and National Security Adviser, Zbigniew

Brzezinski, was its director. These people were among what the savvy Canadian professor Peter Dale Scott later dubbed the Deep State. I was living at this time on a couch in a downtown loft rented by a friend of a friend. Both friends and all their friends were artists, and all of them lived in an area recently named Tribeca, which sounds exotic but really was a real estate agents’ confection that stood for ‘triangle below canal’, as in Canal Street. Like so many people in Manhattan these artists came from all over America and other parts of the world dedicated to getting to the top of their careers, in their cases, art. They didn’t care much about the election, not their problem, but they were intrigued by my story that Carter was indebted to Rockefeller, the guy who had built the towers right in the heart of their home neighbourhood of Tribeca. One of them, a gal from Florida named Paula, was electrified by the story, being already obsessed with how Rockefeller operated. The living area of her primitive loft, two blocks from the WTC, was dominated by two cardboard models of the buildings, each a metre high, secured to the aged wood floor by gaffers’ tape, around which she’d painted a circle of a metre’s radius with all the streets and landmarks labelled like in a street directory: Broadway, City Hall, the Woolworth building, Wall St, her loft, etc. ‘What’s it all mean?’ I asked provocatively, and she yelled, ‘It’s obvious, to anyone who isn’t a dumbfuck Australian… it’s all the places they’ll crush when they fall down.’

crazy? Look, the WTC is collapsing with thousands of people trapped right there,’ pointing, shaking, ‘that’s reality and you’re playing those horrible deafening violent video-games?’ A pause, then 14-year-old Jackson says ‘Yeah mom, that’s reality and it’s scary as hell…’ Then, pointing at his flickering screen, ‘this shit isn’t real – not scary at all.’ People are still trying to unravel who did the 9/11 crash-bombings. Biden says he’ll open up some files. The 19 hijackers were cannon fodder from Saudi Arabia, paid for by the House of Saud. My guess is America’s Hot Dogs thought they were playing the Saud family gang and getting an excuse to take Iraq. As usual they were hoisted on their own petards. Our next floor neighbour worked in that tower — she clambered down 30 plus floors of concrete stairs and survived. Another friend came up to the lobby from the WTC subway stop to buy art supplies — she was driven back by a cascade of glass and embers and got on the last train ever to leave that stop.

COVID WILL NOT STOP ART. Brunswick Nature Sculpture Walk 2021 will be o nl i ne, o n a i r a nd o ng o i ng . ONLINE From 20th to 30th of September, online catalogue showcasing 50 artists and their work. Be involved – Purchase or commission an artwork; help judge the People’s Choice Award – voting online, kindly sponsored by our local sculptor Christina Khumari. ON AIR

Artists interviews on BayFM through September.

When they did fall down, 25 years later, Cydney and I stood gaping through the living room windows while our boy Jackson and some schoolmates played shoot’em-up video games. As the steel and glass blew up downtown Cyd turned and exclaimed ‘Are you boys