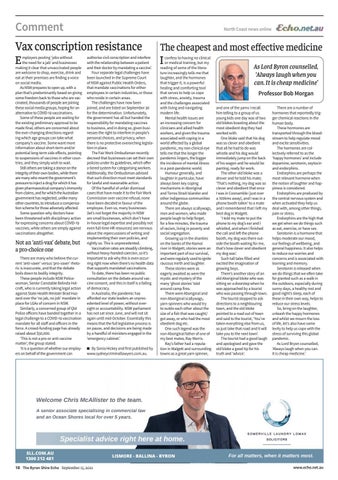 ÈëƶĈşŕƆĈſĶżƐĶşŕſĕƆĶƆƐëŕĈĕ E mployers posting ‘jobs without the need for a jab’ and businesses making it clear that unvaccinated people are welcome to shop, exercise, drink and eat at their premises are finding a voice on social media. As NSW prepares to open up, with a plan that’s predominantly based on giving some freedom back to those who are vaccinated, thousands of people are joining these social media groups, hoping for an alternative to COVID-19 vaccinations. Some of these people are waiting for the existing preliminary approval to be made final, others are concerned about the ever-changing directions regarding which age groups can take what company’s vaccine. Some want more information about short-term and/or potential long-term side effects, pointing to suspensions of vaccines in other countries, and they simply wish to wait. Still others are taking a stance on the integrity of their own bodies, while there are many who resent the government’s pressure to inject a drug for which it has given pharmaceutical company’s immunity from claims, and for which the Australian government has neglected, unlike many other countries, to introduce a compensation scheme for those adversely affected. Some question why doctors have been threatened with disciplinary action for expressing concerns about COVID-19 vaccines, while others are simply against vaccinations altogether.

mşƐëŕțëŕƐĶȒưëƶȜĎĕćëƐĕǽćƖƐ ëżſşȒĈĲşĶĈĕşŕĕ There are many who believe the current ‘anti-vaxer’ versus ‘pro-vaxer’ rhetoric is inaccurate, and that the debate boils down to bodily integrity. These people include NSW Policewoman, Senior Constable Belinda Holcroft, who is currently taking legal action against State Health Minister Brad Hazzard over the ‘no jab, no job’ mandate in place for LGAs of concern in NSW. Similarly, a concerned group of Qld Police officers have banded together in a legal challenge to a COVID-19 vaccination mandate for all staff and officers in the force. A crowd-funding page has already raised about $50,000. ‘This is not a pro-or anti-vaccine matter’, the group stated. ‘It is a question of whether our employers on behalf of the government can

authorise civil conscription and interfere with the relationship between a patient and their doctor by mandating a vaccine’. Four separate legal challenges have been launched in the Supreme Court of NSW against Public Health Orders, that mandate vaccinations for either employees in certain industries, or those who reside in certain areas. The challenges have now been joined, and are listed on September 30 for the determination. Unfortunately, the government has all but handed the responsibility for mandating vaccines to business, and in doing so, given businesses the right to interfere in people’s personal choices, and privacy, when there is no protective overarching legislation in place. The Fair Work Ombudsman recently decreed that businesses can set their own policies under its guidelines, which offer a tiered system for categorising workers. Additionally, the Ombudsman advised that such direction must meet standards for lawful and reasonable action. Of the handful of unfair dismissal cases that have made it to the Fair Work Commission over vaccine refusal, none have been decided in favour of the employee. Even so, many businesses (let’s not forget the majority in NSW are small businesses, which don’t have in-house legal expertise and possibly not even full-time HR resources) are nervous about the repercussions of writing and implementing their own policies, and rightly so. This is unprecedented. Vaccination rates are steadily climbing, without heavy-handed coercion, so it’s important to ask why this is even occurring right now when there’s no health data that supports mandated vaccinations. To date, there has been no public consultation on the debate around vaccine consent, and this in itself is a failing of democracy. In Australia, the pandemic has afforded our state leaders an unprecedented level of power, without oversight or accountability. NSW parliament has not sat since June, and will not sit again until mid-October. Essentially this means that the full legislative process is on pause, and decisions are being made by a handful of ministers engaged in the ‘emergency cabinet.’

Q By Sonia Hickey and first published by www.sydneycriminallawyers.com.au.

confess to having no clinical or medical training, but my reading of some of the literature increasingly tells me that laughter, and the hormones that trigger it, is a powerful healing and comforting tool that serves to help us cope with stress, anxiety, trauma and the challenges associated with living and navigating modern life. Mental health issues are an increasing concern for clinicians and allied health workers, and given the trauma associated with coping in a world affected by a global pandemic, my non-clinical eye tells me that the longer the pandemic lingers, the bigger the incidence of mental illness in a post-pandemic world. Humour generally, and laughter in particular, have always been key coping mechanisms in Aboriginal and Torres Strait Islander and other Indigenous communities around the globe. There are always scallywags, men and women, who made people laugh to help forget, for a few minutes, the trauma of racism, living in poverty and social segregation.  Growing up in the shanties on the banks of the Namoi river in Walgett, stories were an important part of our survival, and were regularly used to ignite raucous mirth and laughter. These stories were as eagerly awaited as were the mystic and mystery of the many ‘ghost stories’ told around camp fires. There were Aboriginal and non-Aboriginal scallywags, yarn-spinners who would try to outdo each other about the size of a fish that was caught/ got away, or who had the most obedient dog etc. One such legend was the non-Aboriginal father of one of my best mates, Ray Morris.  Ray’s father had a reputation in Walgett and surrounding towns as a great yarn spinner,

As Lord Byron counselled, ‘Always laugh when you ĈëŕȁPƐȝĶƆĈĲĕëżŔĕĎĶĈĶŕĕț Professor Bob Morgan and one of the yarns I recall him telling to a group of us young kids one day was of two old blokes boasting about the most obedient dog they had worked with. One bloke said that his dog was so clever and obedient that all he had to do was whistle and his dog would immediately jump on the back of his wagon and he would be panting, ready for work. The other old bloke was a drover and he told his mate; ‘That’s nothing, my dog was so clever and obedient that once I was in Coonamble (just over a 100kms away), and I was in a phone booth talkin’ to a mate and I remembered that I left my best dog in Walgett. ‘I told my mate to put the phone to my dog’s ear and I whistled, and when I finished the call and left the phonebooth, my dog was there outside the booth waiting for me, that’s how clever and obedient my dog was’. Such tall tales filled and excited the imagination of growing boys. There’s another story of an old Aboriginal bloke who was sitting on a doorstep when he was approached by a tourist who was passing through town. The tourist stopped to ask directions to a neighbouring town, and the old bloke pointed to a road out of town and said to the tourist, ‘You’ve taken everything else from us, so just take that road and it will take you to the next town’. The tourist had a good laugh and apologised and gave the old bloke a good tip for his truth and ‘advice’.

There are a number of hormones that reportedly trigger chemical reactions in the human body. These hormones are transported through the bloodstream to help regulate mood and excite sensitivities. The hormones are collectively referred to as the ‘happy hormones’ and include dopamine, serotonin, oxytocin and endorphins. Endorphins are perhaps the most relevant hormone when the notion of laughter and happiness is considered. Endorphins are produced by the central nervous system and when activated they help us deal with, among other things, pain or stress. Endorphins are the high that we get when we do things such as eat, exercise, or have sex. Serotonin is a hormone that helps moderate our mood, our feelings of wellbeing, and general happiness. It also helps to reduce our worries and concerns and is associated with learning and memory. Serotonin is released when we do things that we often take for granted such as a walk in the outdoors, especially during sunny days, a healthy rest and good night’s sleep, each of these in their own way, helps to reduce our stress levels.  So, bring on the laughter, unleash the happy hormones and whilst we mourn the loss of life, let’s also have some levity to help us cope with the stress of surviving this global pandemic.  As Lord Bryon counselled, ‘Always laugh when you can. It is cheap medicine.’

Welcome Chris McAllister to the team. A senior associate specialising in commercial law and an Ocean Shores local for over 5 years.