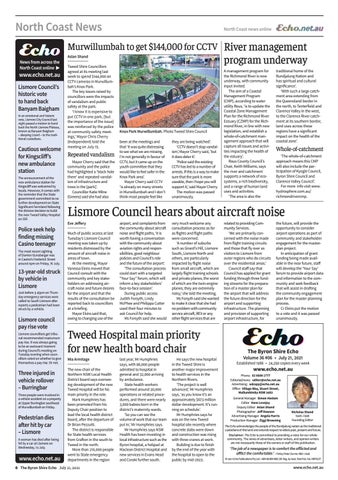 Murwillumbah to get $144,000 for CCTV River management

News from across the North Coast online

Tweed Shire Councillors agreed at its meeting last week to spend $144,000 on CCTV cameras in Murwillumbah’s Knox Park. The key issues raised by councillors were the impacts of vandalism and public safety at the park. ‘I know it is expensive to put CCTV in one park, [but the importance of the issue] was reinforced by the police at community safety meetings,’ Mayor Chris Cherry (Independent) told the meeting on July 15.

Repeated vandalism Mayor Cherry said that the community and the police had highlighted a ‘black hole there’ and repeated vandalism of infrastructure and trees in the [park]’. Councillor Katie Milne (Greens) said she had also

The most recent sighting of Darrien Gunsberger was in Casino’s Frederick Street around 4pm on Friday, 16 July.

13-year-old struck by vehicle in Lismore Just before 3.45pm on Thursday emergency services were called to South Lismore after reports a pedestrian had been struck by a vehicle.

Lismore council pay rise vote Lismore councillors get tribunal recommended maxiumum pay rise. It was always going to be an awkward moment during Council’s meeting on Tuesday evening when councillors voted on whether to give themselves a pay rise. Or not.

Three injured in vehicle rollover – Burringbar Three people were involved in a vehicle accident on a property at Upper Burringbar southeast of Murwillumbah on Friday.

Pedestrian dies after hit by car – Lismore A woman has died after being hit by a car at Lismore on Wednesday, 14 July.

been at the meetings and that ‘it was quite distressing to see what we are missing. I’m not generally in favour of CCTV, but it came up on the youth committee that they would like to feel safer in the Knox Park area’. Mayor Cherry said CCTV ‘is already on many streets in Murwillumbah and I don’t think most people feel like

they are being watched’. ‘CCTV doesn’t stop vandalism’, Mayor Cherry said, ‘but it does deter it’. ‘Police said the existing CCTV has led to a number of arrests. If this is a way to make sure that the park is more useable, then I hope you will support it,’ said Mayor Cherry. The motion was passed unanimously.

traditional home of the Bundjalung Nation and has spiritual and cultural significance’. ‘With such a large catchment area extending from the Queensland border in the north, to Tenterfield and Clarence Valley in the west, to the Clarence River catchment at its southern border, land uses across these regions have a significant impact on the health of the coastal zone’.

Much of public access at last Tuesday’s Lismore Council meeting was taken up by residents distressed by the amount of aircraft noise in areas of town. At the meeting, Mayor Vanessa Ekins moved that Council consult with the community and key stakeholders on addressing aircraft noise and future desires for the airport and that the results of the consultation be reported back to councillors at a briefing. Mayor Ekins said that, owing to changing use of the

airport, and complaints from the community about aircraft noise and flight paths, ‘it is worth having a conversation with the community about aviation rights and responsibilities, good neighbour policies and Council’s role and the future of the airport’. ‘The consultation process could start with a targeted “Your Say” forum, which will inform a key stakeholders’ face-to-face session’. During public access Judith Forsyth, Lindy McPhee and Philippa Cutter used their four minutes to ask Council for help. Ms Forsyth said she would

very much welcome any consultation process as far as flights and flight paths were concerned. ‘A number of suburbs such as Girard’s Hill, Lismore South, Lismore North and others, are particularly impacted by flight noise from small aircraft, which are largely flight training schools and private planes, the worst of which are the twin-engine planes; they are extremely noisy,’ she told the meeting. Ms Forsyth said she wanted to make it clear that she had no problem with community service aircraft, REX or any other flight services that are

Tweed Hospital main priority ĪşſȞŕĕƱĲĕëōƐĲćşëſĎĈĲëĶſ Mia Armitage The new chair of the Northern NSW Local Health District board says overseeing development of the new Tweed Hospital will be his main priority in the role. Mark Humphries has been promoted from his Deputy Chair position to lead the local health district board, after the departure of Dr Brian Pezzutti. The district is responsible for State health services from Grafton in the south to Tweed in the north. More than 210,000 people went to State emergency departments in the region

last year, Mr Humphries says, with 96,000 people admitted to hospital in general and 32,000 arriving by ambulance. State health workers performed around 30,000 operations or related procedures, and there were nearly 3,000 babies born in the district’s maternity wards. ‘So you can see the volume of work that our team put in,’ Mr Humphries says. Mr Humphries says NSW Health has been investing in local infrastructure such as the Byron hospital, a helipad at Maclean District Hospital and new services in Evans Head and Coraki further south.

He says the new hospital in the Tweed Shire is another major improvement to health services in the Northern Rivers. ‘The project is well advanced,’ Mr Humphries says, ‘as you know it’s an approximately $673 million dollar development. It’s running on schedule’. Mr Humphries says he was on the new Tweed hospital site recently where concrete slabs were down and construction was rising with three cranes at work. Building is due to finish by the end of the year with the hospital to open to the public by mid-2023.

related to providing Community Services. ‘We are primarily concerned with the noise made from flight training circuits and those that fly over as visitors to Lismore from outer regions who do circuits over the residential areas.’ Council staff say that Council has applied for grant funding through three funding streams for the preparation of a master plan for the airport that will address the future direction for the airport and supporting infrastructure. The planning and provision of supporting airport infrastructure, for

the future, will provide the opportunity to consider airport operations as part of community and stakeholder engagement for the masterplan project. In anticipation of grant funding being made available in the near future, staff will develop the ‘Your Say’ forum to provide airport data and information to the community and seek feedback that will assist in drafting the community engagement plan for the master planning process. Cr Ekins put the motion to a vote and it was passed unanimously.