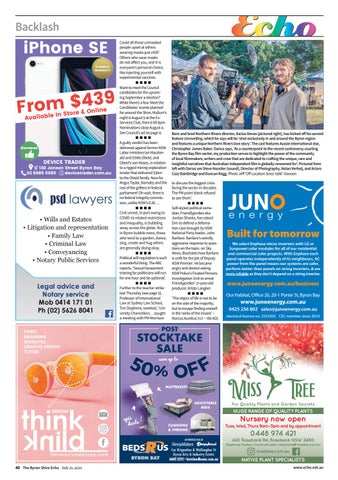 Could all those unmasked people upset at others wearing masks just chill? Others who wear masks do not affect you, and it is everyone’s personal choice, like injecting yourself with experimental vaccines. Want to meet the Council candidates for the upcoming September 4 election? While there’s a few ‘Meet the Candidates’ events planned for around the Shire, Mullum’s night is August 9 at the ExServices Club, from 6 till 8pm. Nominations close August 4 . See Council’s ad on page 9. A guilty verdict has been delivered against former NSW Labor ministers Ian Macdonald and Eddie Obeid, and Obeid’s son Moses, in relation to a rigged mining exploration tender that delivered $30m to the Obeid family. Now for Angus Taylor, Barnaby and the rest of the grifters in federal parliament! Oh wait, there is no federal integrity commission, unlike NSW’s ICAC… Civil unrest, in part owing to COVID-19 related restrictions and inequality, is bubbling away across the globe. But in Byron bubble news, those who tend to a garden, dance, sing, create and hug others are generally doing okay. Political self-regulation is such a wonderful thing. The ABC reports, ‘Sexual harassment training for politicians will run for one hour and be optional’. Further to the teacher strike last Thursday (see page 5), Professor of International Law at Sydney Law School, Tim Stephens, tweeted, ‘University Chancellors… sought a meeting with PM Morrison

Born and bred Northern Rivers director, Darius Devas (pictured right), has kicked off his second feature Unravelling, which he says will be ‘shot exclusively in and around the Byron region and features a unique Northern Rivers love story’. The cast features Aussie international star, Christopher James Baker. Darius says, ‘As a counterpoint to the recent controversy courting the Byron Bay film sector, my production serves to highlight the power of the community of local filmmakers, writers and crew that are dedicated to crafting the unique, rare and insightful narratives that Australian independent film is globally renowned for’. Pictured from left with Darius are Steve Nossiter (sound), Director of Photography, Nolan Verheij, and Actors Cazz Bainbridge and Duncan Ragg. Photo Jeff ‘Off Location Since 1986’ Dawson to discuss the biggest crisis facing the sector in decades. The PM point blank refused to see them’. Self-styled political comedian, Friendlyjordies aka Jordan Shanks, has raised $1m to defend a defamation case brought by NSW National Party leader, John Barilaro. Barilaro’s weirdly aggressive response to questions on the topic, on Sky News, illustrates how Barilaro is unfit for the job of Deputy NSW Premier. He became angry and denied asking NSW Police’s Fixated Persons Investigation Unit to arrest Friendyjordies’ 21-year-old producer, Kristo Langker. ‘The object of life is not to be on the side of the majority, but to escape finding oneself in the ranks of the insane’ – Marcus Aurelius (121 – 180 AD).

Built for tomorrow We select Enphase micro-inverters with LG or Sunpower solar modules for all of our residential and commercial solar projects. With Enphase each panel operates independently of its neighbours, AC power from the panel means our systems are safer, perform better than panels on string inverters, & are more reliable as they don’t depend on a string inverter.