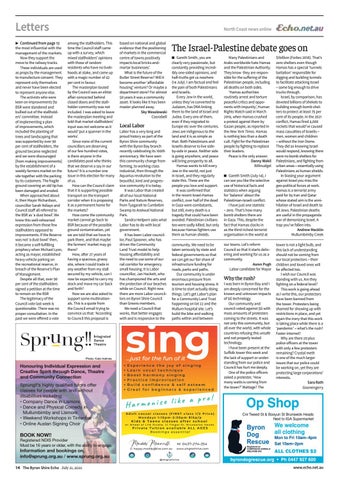 Letters ▶ Continued from page 12 the most influential with the management of the markets. Now they support the move to the railway tracks. These individuals are used as props by the management to manufacture consent. They represent only themselves and never have been elected to represent anyone else. The activists who were keen on improvements [to BSR were slandered and bullied out of the stallholders’ committee. Instead of implementing a plan of improvements, which included the planting of trees and landscaping that was supported by over 90 per cent of stallholders, the ground became neglected and we were discouraged [from making improvements] by the establishment of a weekly farmers market on the site together with the parking by its customers. The fragile ground covering an old tip has been damaged and eroded. When approached about it, then Mayor Richardson, councillor Sarah Ndiaye and Council staff all referred to the BSR as ‘a dust bowl’. We knew this well-rehearsed expression from those few stallholders opposed to improvements. If the Reserve was not ‘a dust bowl’ then, it became a self-fulfilling prophecy when Michael Lyon, acting as mayor, established heavy vehicle parking on the recreational reserve, in breach of the Reserve’s Plan of Management. Despite all that, over 90 per cent of the stallholders signed a petition at the time to remain on the BSR The legitimacy of the Council vote last week is questionable. There was no proper consultation. In the past we were offered a vote

North Coast news online among the stallholders. This time the Council staff came up with a survey, which mixed stallholders’ opinions with those of random residents who have no livelihoods at stake, and came up with a magic number of 42 per cent in favour. The masterplan touted by the Council was an elitist affair concocted behind closed doors and the stallholder community was not included. I was asked to leave the masterplan meeting and told that market stallholders’ input was not welcome as it would ‘put a spanner in the works’. Since none of the current councillors are deserving of our few hundred votes, is there anyone in the candidates pool who thinks that we deserve a say in our future? It is a number one issue in this election for many of us. How can the Council claim that it is supporting possible transport on the transport corridor when it is proposing it as a permanent home for the markets? How come the community market cannot go back to BSR because of the possible ground contamination, yet we are told that we have to park there, and that maybe the farmers’ market may go there? How, after 27 years of having a spacious, grassy site, where I could trade in any weather from my stall secured by my vehicle, can I now be expected to carry my stock and move my car back and forth? Now we are also asked to support some multinationals. This is a quote from the Council email trying to convince us that: ‘According to Council this proposal is

based on national and global evidence that the positioning of markets in the commercial centre of towns positively impacts local bricks-andmortar businesses’. What is the future of the Butler Street Reserve? Will it become another ‘affordable housing’ venture? Or maybe a department store? For almost 50 years it was a community asset. It looks like it has been master planned away. Sky Wesolowski Coorabell

Local Labor Labor has a very long and proud history as part of the Byron Shire community with the Byron Bay branch recently celebrating its 100th anniversary. We have seen this community change from farming, to working class industrial, then through the Aquarius revolution to the beautiful, kind and progressive community it is today. It was Labor that created all of our local National Parks and Nature Reserves, from Tyagarah to Cumbebin Swamp to Arakwal National Park. Sandra Heilpern asks what Labor has to do with local government. It has been Labor councillor, Paul Spooner, who has driven the Community Land Trust model to help housing affordability and the need to use some of our rail corridor for emergency small housing. It is Labor councillor, Jan Hackett, who has championed the arts and the protection of our beaches while on Council. Right now there are more Labor councillors on Byron Shire Council than Greens members. We need a Council that works, that better engages with and is responsive to the

The Israel-Palestine debate goes on Q Gareth Smith, you are clearly very passionate, but constantly providing incredibly one-sided opinions, and half-truths get us nowhere (14 July). I am factual and feel the pain of both Palestinians and Israelis. Every Jew in the world, unless they’ve converted to Judaism, has DNA linking them to the land of Israel and Judea. Every one of them, even if they migrated to Europe etc over the centuries. Jews are indigenous to the land and it is as simple as that. Both Palestinians and Israelis deserve to live sideby-side in peace. Neither side is going anywhere, and peace will bring prosperity to all. Hamas wants to kill every Jew in the world, not just in Israel, and they regularly state this. These are the people you love and support. It was confirmed that in the recent Israel-Hamas conflict, over half of the dead in Gaza were combatants, but still, every death is a tragedy that could have been avoided. Palestinian civilians too were sadly killed, but only because Hamas fighters use them as human shields.

community. We need to be taken seriously by state and federal governments so that we can get our fair share of infrastructure funding for roads, parks and paths. Our community is under enormous pressure from tourism and housing stress. It is time to start actually doing things. Let’s get Labor’s plan for a Community Land Trust happening on lot 22 and the Mullum hospital site. Let’s build the bike and walking paths within and between

Many Palestinians and Arabs worldwide hate Hamas and the Palestinian Authority. They know they are responsible for the suffering of the Palestinian people, including all deaths on both sides. ‘Hamas authorities routinely arrest and torture peaceful critics and opponents with impunity’, Human Rights Watch said in March 2019, when Hamas crushed a protest against them by Gazan people, as reported in the New York Times. Hamas is nothing less than a death cult. Fight for the Palestinian people by fighting to replace their leaders. Peace is the only answer. Danny Wakil Billinudgel Q Gareth Smith (July 14), I can see you like the selective use of historical facts and statistics when arguing for ‘balance’ about the Palestinian-Israeli conflict. I have just one statistic – zero. That’s how many bomb shelters there are in Gaza. This, despite the fact that Hamas clocks in as the third richest terrorist organisation in the world at

our towns. Let’s reform Council so that it starts delivering and working for us as a community. Asren Pugh Labor candidate for Mayor

Why the rush? I was born in Byron Bay and I am deeply concerned for the known and unknown impacts of 5G technology. Our community and council voted against 5G with mass amounts of protesters coming to the streets. It was not only this community, but all over the world, with whole countries refusing this unsafe and not properly tested technology. I have been present at the Suffolk tower this week and the lack of support or understanding from our police and Council has hurt me deeply. One of the police officers asked a protester, ‘How many watts is coming from the tower?’ Wattage? The

$1billion (Forbes 2018). That’s zero shelters even though Hamas has a special ‘tunnels battalion’ responsible for digging and building tunnels to facilitate attacking Israel – some big enough to drive trucks through. Israel, by comparison, has devoted billions of shekels to building enough bomb shelters to protect at least 75 per cent of its people. In the 2021 conflict, Hamas fired 4,000 rockets that would’ve caused mass casualties of Israelis – men, women and children – without the Iron Dome. They did so knowing Israel would respond, knowing there were no bomb shelters for Palestinians, and fighting from urban areas – essentially using Palestinians as human shields. In biasing your argument against Israel you miss the geo-political forces at work. Hamas is a terrorist army paid for by Iran and Qatar whose stated aim is the annihilation of Israel and death to all Jews. Palestinian deaths are useful in the propaganda war of demonising Israel. A trap you’ve fallen into. Andrew Macklin Mullumbimby Creek tower is not a light bulb, and this lack of understanding should not be coming from our local protectors – their children and loved ones will be affected too. I wish our Council was standing with us. Are they fighting on a federal level? This work is going ahead as I write this, our protectors have been banned from the tower. Protesters being shamed for showing up with restrictions in place, and yet again the irony that this work is taking place while there is a ‘pandemic’ – what’s the rush? Faster internet? Why are there 20 plus police officers at the tower with only a few protesters remaining? Crystal meth is one of the much larger issues that our police could be working on, yet they are protecting large corporations’ interests. Sara Rath Goonengerry