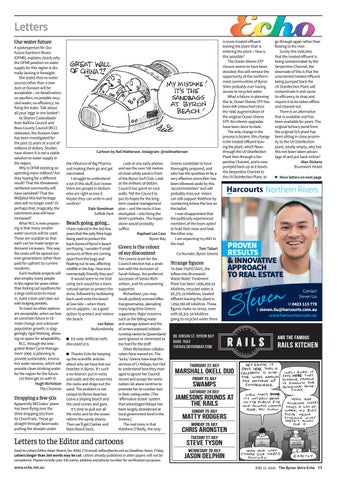 Letters Our water future A spokesperson for Our Future Northern Rivers (OFNR), explains clearly why the OFNR position on water supply for this region is dismally lacking in foresight. She states that no water sources other than a new dam at Dunoon will be acceptable – no desalination; no aquifers; no potable recycled water; no efficiency; no fixing the leaks. Talk about all your ‘eggs in one basket’! As Sharon Cadwallader from Ballina Council and Rous County Council (RCC) reiterates, the Dunoon Dam has been investigated for the past 25 years at a cost of millions of dollars. Studies have shown it is not a viable solution to water supply in the region. Why is OFNR insisting on spending more millions? Are they hoping for a different result? That the threatened rainforest community will have vanished? That the Widjabul Wia-bal heritage sites will no longer exist? Or perhaps that, magically, the catchment area will have increased? What RCC is now proposing is that many smaller water sources will be used. These are scalable so that each can be made larger as demand increases. This way the costs will be spread out over generations rather than paid for upfront by current residents. Such multiple projects will also employ many people in the region for years rather than forking out squillions for a large contractor to move in, build a dam and clear out with bulging pockets. To insist no other options are acceptable, when we face an uncertain future in climate change and unknown population growth, is staggeringly rigid thinking, allowing no space for adaptability. RCC, through the Integrated Water Cycle Management 2060, is planning to provide sustainable, innovative water sources, which will provide clean drinking water for the region for the future. Let them get on with it! Hugh Nicholson The Channon

'ſşżżĶŕīëĪĕƱǬEƆ Apparently Bill Gates’ plane has been flying over the Shire dropping 5Gs from its ChemTrails. These go straight through facemasks putting the sheeple under

Cartoon by Neil Matterson. Instagram: @neilmatterson the influence of Big Pharma and making them go and get vaccinated. I struggle to understand a lot of this stuff, but I know there are people in Mullum who are right across it. Maybe they can write in and confirm? Dale Steedman Suffolk Park

Beach going, going... I have noticed in the last few years that the poly fibre bags being used to protect the back dunes of Byron’s beach are fraying. I wonder if small amounts of fibre are coming apart from the bags and floating out to sea, affecting wildlife in the bay. How environmentally friendly they are? It would seem to me that using rock would be a more natural option to protect the dune, followed by bulldozing back sand onto the beach at low tide – when there are no pippies – as a good option to protect and restore the beach. Len Bates Mullumbimby Q Ed note: Artificial reefs

discussed p13. Q Thanks Echo for keeping up the scientific articles about why we have lost our beaches in Byron. It’s such a no-brainer: put in rocks and walls and the ocean hits the rocks and drags out the sand. The problem is not unique to Byron beaches. Leave a sloping beach and the sand comes and goes. It’s time to pull out all the rocks and let the ocean reform the sandy shores. Then we’ll get Clarkes and Main Beach back.

Look at any early photos and see the over 100 metres of clean white sand in front of the Byron Surf Club. Look at the millions of dollars Council has spent on rock walls. Tell the Council to put its hopes for the longterm coastal management plan – and the rocks it has stockpiled – into fixing the Shire’s potholes. The hopes alone would probably suffice. Raphael Lee Cass Byron Bay

EſĕĕŕĶƆƐĲĕĈşōşƖſ şĪȞŔƷĎĶƆĈşŕƐĕŕƐ The Greens team for the Council election has a problem with the inclusion of Sarah Ndiaye, the preferred successor of Simon Richardson, and his unwavering supporter. Richardson, you may recall, publicly scorned effective governance, alienating many long-time Greens supporters. Major concerns such as the failing water and sewage system and the 4Corners-exposed rubbishrunning-racket to Queensland were ignored or minimised as too hard for the staff. Other Richardson collaborators have moved on. The ‘lucky’ Greens have kept the services of Cr Ndiaye, but I fail to understand how they managed to ignore her Council record and accept her nomination, let alone contrive to promote her to number two in their voting order. (The ‘affirmative action’ system that advantaged Ndiaye has been largely abandoned at local government level in the Greens.) The real irony is that Matthew O’Reilly, the only

Letters to the Editor and cartoons Send to Letters Editor Aslan Shand, fax: 6684 1719 email: editor@echo.net.au Deadline: Noon, Friday. Letters longer than 200 words may be cut. Letters already published in other papers will not be considered. Please include your full name, address and phone number for verification purposes.

Greens candidate to have thoroughly prepared, and who has the qualities to be a very effective councillor, has been elbowed aside by this ‘accommodation’ and will probably miss out. Voters can still support Matthew by numbering below the line on the ballot. I was disappointed that the politically experienced members of the team opted to hold their nose and look the other way. I am expecting my AVO in the mail. Tom Tabart Co-founder, Byron Greens

is more treated effluent leaving the plant than is entering the plant – how is this possible? The Ocean Shores STP closure seems to have been decided; this will remove the opportunity of the northernmost communities of Byron Shire probably ever having access to recycled water. What a failure in planning this is, Ocean Shores STP has been left untouched since the 1995 augmentation of the original Ocean Shores STP. No interim upgrades have been done to date. The only change in the process is bizarre, this change is the treated effluent leaving the plant, which flows through the UV Disinfection Plant then through a Serpentine Channel, and is now pumped back up as it leaves the Serpentine Channel to the UV Disinfection Plant, to

go through again rather than flowing to the river. Surely this indicates that the treated effluent is being contaminated by the Serpentine Channel, the downside of this is that the unscreened treated effluent being pumped back the UV Disinfection Plant will contaminate it and cause its efficiency to drop and require it to be taken offline and cleaned out. There is an alternative that is available and has been available for years. The original tertiary pond from the original O/S plant has been sitting in close proximity to the UV Disinfection plant, totally empty, why has this not been taken advantage of and put back online? Alan Dickens Brunswick Heads

▶ More letters on next page