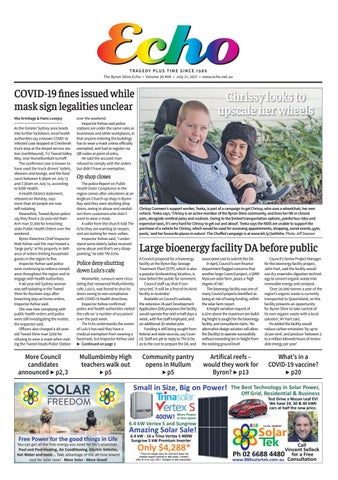 !wÈP'ȒǞǦǕŕĕƆĶƆƆƖĕĎƱĲĶōĕ ŔëƆŊƆĶīŕōĕīëōĶƐĶĕƆƖŕĈōĕëſ Mia Armitage & Hans Lovejoy As the Greater Sydney area heads into further lockdown, local health authorities say a known COVID-19 infected case stopped at Chinderah truck stop at the Ampol service station (northbound), 112 Tweed Valley Way, near Murwillumbah turnoff. The confirmed case is known to have used the truck drivers’ toilets, showers and lounge, and the food court between 8.30pm on July 13 and 7.30am on July 14, according to NSW Health. A Health District statement, released on Monday, says more than 40 people are now self-isolating. Meanwhile, Tweed-Byron police say they fined a 25-year-old Main Arm man $1,000 for breaching state Public Health Orders over the weekend. Byron Detective Chief Inspector Matt Kehoe said the man hosted a ‘large party’ at his property in defiance of orders limiting household guests in the region to five. Inspector Kehoe said police were continuing to enforce compliance throughout the region and to engage with health authorities. A 46-year-old Sydney woman was self-isolating in the Tweed Shire for fourteen days after breaching stay-at-home orders, Inspector Kehoe said. She was now complying with public health orders and police were still investigating the matter, the inspector said. Officers also charged a 48-yearold Tweed Shire man $200 for refusing to wear a mask when visiting the Tweed Heads Police Station

over the weekend. Inspector Kehoe said police stations are under the same rules as businesses and other workplaces, in that anyone entering the buildings has to wear a mask unless officially exempted, and had to register via QR codes at point of entry. He said the accused man refused to comply with the orders but didn’t have an exemption.

Op shop closes The police Report on Public Health Order Compliance in the region comes after volunteers at an Anglican Church op shop in Byron Bay said they were shutting shop doors, owing to abuse and vandalism from customers who didn’t want to wear a mask. A vollie from the church told The Echo they are wanting to reopen, and are looking for more vollies. Inspector Kehoe said, ‘I understand some elderly ladies received some abuse and that’s very disappointing,’ he told The Echo.

Chrissy Cunneen’s support worker, Teeka, is part of a campaign to get Chrissy, who uses a wheelchair, her own vehicle. Teeka says, ‘Chrissy is an active member of the Byron Shire community, and lives her life in chronic pain, alongside cerebral palsy and scoliosis. Owing to the limited transportation options, painful bus rides and expensive taxis, it’s very hard for Chrissy to get out and about’. Teeka says the NDIS are unable to support the purchase of a vehicle for Chrissy, which would be used for accessing appointments, shopping, social events, gym, pools, ‘and her favourite places in nature’. The Chuffed campaign is at www.bit.ly/3wIVnhe. Photo Jeff Dawson

Meanwhile, rumours were circulating that renowned Mullumbimby cafe, Lulu’s, was forced to shut its doors owing to non-compliance with COVID-19 health directives. Inspector Kehoe confirmed police and health authorities visited the cafe on ‘a number of occasions’ over the past week. The Echo understands the owner of Lulu’s has said they have a medical exemption from wearing a facemask, but Inspector Kehoe said ▶ Continued on page 2

A Council proposal for a bioenergy facility at the Byron Bay Sewage Treatment Plant (STP), which is also a popular birdwatching location, is now before the public for comment. Council staff say that if constructed, ‘it will be a first-of-its-kind facility in Australia’. Available on Council’s website, the extensive 26-part Development Application (DA) proposes the facility would operate five-and-a-half-days a week, with five staff employed, and an additional 30 related jobs. Funding is still being sought from federal and state sources, say Council. Staff are yet to reply to The Echo as to the cost to prepare the DA, and

associated cost to submit the DA. In April, Council’s own finance department flagged concerns that another large Council project, a 5MW Myocum solar farm, poses a ‘high degree of risk’. The bioenergy facility was one of many Council projects identified as being at risk of losing funding, within the solar farm report. A height variation request of 4.57m above the maximum 9m building height is sought for the bioenergy facility, and consultants claim, ‘No alternative design solution will allow the [facility] to operate successfully without exceeding 9m in height from the existing ground level’.

Council’s Senior Project Manager for the bioenergy facility project, John Hart, said the facility would use dry anaerobic digestion technology to convert organic waste into renewable energy and compost. ‘Over 20,000 tonnes a year of the region’s organic waste is currently transported to Queensland, so this facility presents an opportunity for Byron Shire to take control of its own organic waste with a local solution’, Mr Hart said. He added the facility would reduce carbon emissions ‘by up to 20 per cent’, and produce ‘between 3 to 4 million kilowatt-hours of renewable energy per year’.

Artifical reefs – would they work for Byron? ▶ p13