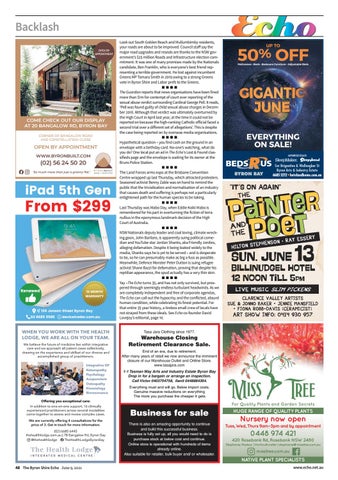 Look out South Golden Beach and Mullumbimby residents, your roads are about to be improved. Council staff say the major road upgrades and reseals are thanks to the NSW government’s $25 million Roads and Infrastructure election commitment. It was one of many promises made by the Nationals candidate, Ben Franklin, who is everyone’s best friend representing a terrible government. He lost against incumbent Greens MP Tamara Smith in 2019 owing to a strong Greens vote in Byron Shire and Labor prefs to the Greens. The Guardian reports that news organisations have been fined more than $1m for contempt of court over reporting of the sexual abuse verdict surrounding Cardinal George Pell. It reads, ‘Pell was found guilty of child sexual abuse charges in December 2018. Although that verdict was ultimately overturned by the High Court in April last year, at the time it could not be reported on because the high-ranking Catholic official faced a second trial over a different set of allegations’. This is despite the case being reported on by overseas media organisations. Hypothetical question – you find cash on the ground in an envelope with a birthday card. No-one’s watching, what do you do? One local put an ad in The Echo’s Lost & Found classifieds page and the envelope is waiting for its owner at the Bruns Police Station. The Land Forces arms expo at the Brisbane Convention Centre wrapped up last Thursday, which attracted protesters. Seasoned activist Benny Zable was on hand to remind the public that the trivialisation and normalisation of an industry that causes death and suffering is perhaps not a particularly enlightened path for the human species to be taking. Last Thursday was Mabo Day, when Eddie Koiki Mabo is remembered for his part in overturning the fiction of terra nullius in the eponymous landmark decision of the High Court of Australia. NSW Nationals deputy leader and coal loving, climate wrecking goon, John Barilaro, is apparently suing political comedian and YouTube star Jordan Shanks, aka Friendly Jordies, alleging defamation. Despite it being leaked widely to the media, Shanks says he is yet to be served – and is desperate to be, so he can presumably make as big a fuss as possible. Meanwhile, Defence Monster Peter Dutton is suing refugee activist Shane Bazzi for defamation, proving that despite his reptilian appearance, the spud actually has a very thin skin.

WHEN YOU WORK WITH THE HEALTH LODGE, WE ARE ALL ON YOUR TEAM. We believe the future of medicine lies within integrative care and we approach all patient cases collectively, drawing on the experience and skillset of our diverse and accomplished group of practitioners. Integrative GP Naturopathy Psychology Acupuncture Osteopathy Kinesiology %LRUHVRQDQFHb

Yay –The Echo turns 35, and has not only survived, but prospered through seemingly endless turbulant headwinds. As we are completely independent and free of corporate agendas, The Echo can call out the hypocrisy and the conflicted, absurd human condition, while celebrating its finest potential. For that entire 35 year history, a tireless small crew of locals have not strayed from these ideals. See Echo co-founder David Lovejoy’s editorial, page 10.

AND THE EPHENSON H I LT O N S T

Warehouse Closing Retirement Clearance Sale. End of an era, due to retirement. After many years of retail we now announce the imminent closure of our Warehouse Outlet and Online Store. www.tasajara.com 1-1 Tasman Way Arts and Industry Estate Byron Bay Drop in for a bargain or arrange an inspection. Call Victor 0403754758, Ilanit 0448884364. Everything must and will go. Below import costs. Genuine massive reductions on everything The more you purchase the cheaper it gets.

Offering you exceptional care: In addition to one-on-one support, 16 clinically experienced practitioners across several modalities come together to assess and review complex cases. We are currently offering 4 consultations for the price of 3. Get in touch for more information. (02) 6685 6445 thehealthlodge.com.au | 78 Bangalow Rd, Byron Bay @thehealthlodge TheHealthLodgeByronBay

There is also an amazing opportunity to continue and build this successful business. Business is fully set up, all you would need to do is purchase stock at below cost and continue. Online store is operational with hundreds of items already online. Also suitable for retailer, bulk buyer and/ or wholesaler.