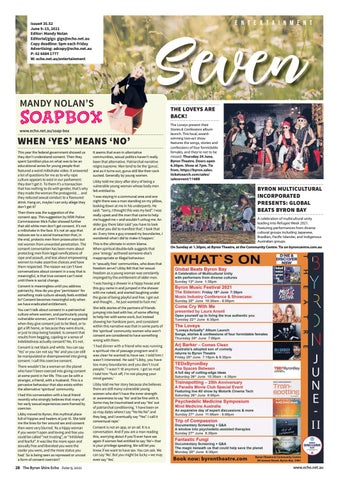 WHEN ‘YES’ MEANS ‘NO’ This year the federal government showed us they don’t understand consent. Then they spent $4million plus on what was to be an educational series for young people that featured a weird milkshake video. It answered a lot of questions for me as to why rape culture appears to exist in our parliament: they don’t get it. To them it’s a transaction that has nothing to do with gender, that’s why they made the woman the protagonist… and they reduced sexual conduct to a flavoured drink. Hang on, maybe I can only allege they don’t get it? Then there was the suggestion of the consent app. This suggestion by NSW Police Commissioner Mick Fuller showed further that old white men don’t get consent. It’s not a milkshake in the face. It’s not an app that reduces sex to a social transaction that, in the end, protects men from prosecution but not women from unwanted penetration. The consent conversation has been more about protecting men from legal ramifications of rape and assault, and less about empowering women to make assertive choices and have them respected. The reason we can’t have conversations about consent in a way that is meaningful, is that true consent can’t exist until there is social change. Consent is meaningless until you address patriarchy. How do you give ‘permission’ for something male culture already feels entitled to? Consent becomes meaningful only when we have eradicated entitlement. You can’t talk about consent in a patriarchal culture where women, and particularly young vulnerable women, aren’t heard or supported when they give consent just to be liked, or to get a lift home, or because they were drunk, or just to stop being hassled. Is consent that results from begging, cajoling or a sense of indebtedness actually consent? No, it’s not. Consent is not black and white. You can say ‘Yes’ or you can not say ‘No’ and you can still be manipulated or disempowered into giving consent. I call this coercive consent. There wouldn’t be a woman on the planet who hasn’t been coerced into giving consent at some point in her life. This can be with a stranger, a friend, with a husband. This is a pervasive behaviour that also exists within the alternative ‘spiritual’ community. I had this conversation with a local friend recently who strongly believes that many of her early sexual experiences were framed by coercion. Libby moved to Byron, this mythical place full of hippies and healers at just 16. She told me the lines for her around sex and consent then were very blurred. ‘As a hippy woman if you weren’t open and loving and free you could be called “not trusting”, or “inhibited and fearful”. It was like the more open and sexually free and liberated you were the cooler you were, and the more status you had.’ So is being seen as repressed or uncool a form of consent coercion?

It seems that even in alternative communities, sexual politics haven’t really been that alternative. Patriarchal narrative reigns supreme. Men tend to be the ‘gurus’, and as it turns out, gurus still like their cock sucked. Generally by young women. Libby told me story after story of being a vulnerable young woman whose body men felt entitled to. ‘I was staying in a communal area and one night there was a man standing on my pillow, looking down at me in his underpants. He said: “sorry, I thought this was my bed”. I was really upset and the man that came to help me hugged me – and wouldn’t unhug me. An older guy there later said ‘you have to look at what you did to manifest that’. I took that on. Every time a guy crossed my boundaries, I wondered what I did to make it happen.’ This is the ultimate in victim blame. When spiritual double-talk suggests that your ‘energy’ authored someone else’s inappropriate or illegal behaviour.

THE LOVEYS ARE BACK! The Loveys present their Stories & Confessions album launch. This local, awardwinning two-act show features the songs, stories and confessions of four formidable females, and they’re not to be missed. Thursday 24 June, Byron Theatre. Doors open 6.30pm. Show at 7pm. Tix from, https://byron.sales. ticketsearch.com/sales/ salesevent/11688

In ‘sexually free’ communities, who does that freedom serve? Libby felt that her sexual freedom as a young woman was constantly impinged by the entitlement of older men. ‘I was having a shower in a hippy house and this guy came in and jumped in the shower with me naked, and started laughing under the guise of being playful and free. I got out and thought… he just wanted to fuck me.’ She tells stories of the partners of friends jumping into bed with her, of some offering to help her with some work, but instead showing her hardcore porn, and consistent within this narrative was that in some parts of the ‘spiritual’ community women who won’t consent are considered to have something wrong with them. ‘I had dinner with a friend who was running a spiritual rite of passage program and it was clear he wanted to have sex. I told him I wasn’t interested. He said “Libby, you have too many boundaries and you don’t trust people.” I wasn’t 18 anymore. I got so mad I told him “fuck off, I’m not playing your mind games.’ Libby told me her story because she believes there are still many vulnerable young women who don’t have the inner strength or awareness to say ‘No’ and be fine with it. Some may be traumatised and say ‘Yes’ out of patriarchal conditioning. ‘I have been on so may dates where I say “No No No” and they beg, and I eventually say “Yes”. I call it consensual rape.’ Consent is not an app, or an ad. It is a conversation. And if you are a man reading this, worrying about if you’ll ever have sex again if women feel entitled to say ‘No’– that is your privilege speaking. We will let you know if we want to have sex. You can ask. We can say ‘No’. But you might be lucky – we may even say ‘Yes’.