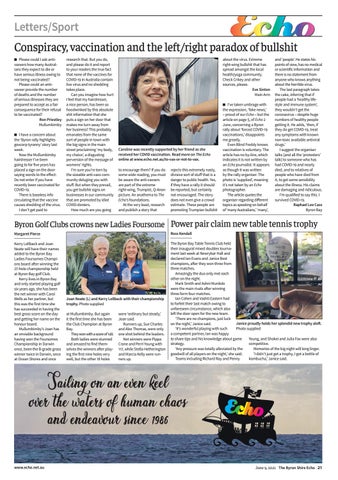 Conspiracy, vaccination and the left/right paradox of bullshit Q Please could I ask anti-

the ‘Byron rally highlights govcorp tyranny’ story last week. Now the Mullumbimby hairdresser I’ve been going to for five years has placed a sign on the door saying words to the effect: Do not enter if you have recently been vaccinated for COVID-19. There is baseless info circulating that the vaccine causes shedding of the virus. I don’t get paid to

research that. But you do, and please do it and report to your readers the true fact that none of the vaccines for COVID-19 in Australia contain live virus and no shedding takes place. Can you imagine how hurt I feel that my hairdresser, a nice person, has been so hoodwinked by this absolute shit information that she puts a sign on her door that makes me turn away from her business? This probably emanates from the same sort of people in town with the big signs in the main street proclaiming ‘my body, my choice’, a disgusting perversion of the message of womens’ rights. I’m sure you’re torn by the sizeable anti-vaxx community deluging you with stuff. But when they prevail, you get bullshit signs on businesses in our community that are promoted by idiot COVID-deniers. How much are you going

about the virus. Extreme right-wing bullshit that has spread amongst the local health/yoga community. Check Crikey and other sources, please. Eve Sinton Main Arm

Caroline was recently supported by her friend as she received her COVID vaccination. Read more on The Echo online at www.echo.net.au/to-vax-or-not-to-vax. to encourage them? If you do some wide reading, you must be aware the anti-vaxxers are part of the extreme right-wing, Trumpist, Q-Anon picture. An anathema to The Echo’s foundations. At the very least, research and publish a story that

rejects this extremely nasty, divisive sort of stuff that is a danger to public health. Yes, if they have a rally it should be reported, but certainly not encouraged. The story does not even give a crowd estimate. These people are promoting Trumpian bullshit

Q I’ve taken umbrage with the expression, ‘fake news,’ – proud of our Echo – but the article on page 5, of Echo 2 June, concerning a Byron rally about ‘forced COVID-19 vaccinations,’ disappoints me greatly. Even Blind Freddy knows vaccination is voluntary. The article has no by-line, which indicates it is not written by an Echo journalist. It appears as though it was written by the rally organiser. The photo is ‘supplied’, meaning it’s not taken by an Echo photographer. The article quotes the organiser regarding different topics as speaking on behalf of ‘many Australians,’ ‘many’,

and ‘people’. He states his points of view, has no medical or scientific information and there is no statement from anyone who knows anything about the horrible virus. The last paragraph takes the cake, inferring that if people had a ‘healthy lifestyle and immune system’, they wouldn’t get the coronavirus – despite huge numbers of healthy people getting it. He adds, ‘then, if they do get COVID-19, treat any symptoms with known non-toxic available antiviral drugs.’ I suggest the organiser talks [and all the ‘protesters’ talk] to someone who has had COVID-19 and nearly died, and to relatives of people who have died from it, to get some sensibility about the illness. His claims are damaging and ridiculous. I’m qualified to say this. I survived COVID-19. Raphael Lee Cass Byron Bay

Kerry Lollback and Joan Neate will have their names added to the Byron Bay Ladies Foursomes Champions board after winning the 27-hole championship held at Byron Bay golf Club. Kerry lives in Byron Bay and only started playing golf six years ago, she has been the net winner with Carol Wells as her partner, but this was the first time she has succeeded in having the best gross score on the day and getting her name on the honour board. Mullumbimby’s Joan has an enviable background having won the Foursomes Championship in Darwin once, been the B-grade gross winner twice in Darwin, once at Ocean Shores and once

The Byron Bay Table Tennis Club held their inaugural mixed doubles tournament last week at Newrybar Hall and declared Ian Evans and Janice Best champions, after they won three from three matches. Amazingly the duo only met each other on the night. Mark Smith and Ashni Murdolo were the main rivals after winning three form four matches. Ian Cohen and Vashti Eastern had to forfeit their last match owing to unforeseen circumstance, which also left the door open for the new team. ‘There are no champions, just luck Janice proudly holds her splendid new trophy aloft. on the night,’ Janice said. Photo supplied ‘It’s wonderful playing with such a competent partner, Ian was happy to share tips and his knowledge about game Young, and Shokei and Julia Fox were also strategy. competitive. ‘Any pressure was totally alleviated by the Memories of the big night will long linger. goodwill of all players on the night,’ she said. ‘I didn’t just get a trophy, I got a bottle of Teams including Richard Ray and Penny kombucha,’ Janice said.

Joan Neate (L) and Kerry Lollback with their championship trophy. Photo supplied at Mullumbimby. But again it the first time she has been the Club Champion at Byron Bay. They won with a score of 148. Both ladies were stunned and amazed to find themselves the winners after playing the first nine holes very well, but the other 18 holes

were ‘ordinary but steady,’ Joan said. Runners up, Sue Charles and Alex Thomas, were only one shot behind the leaders. Net winners were Pippa Crane and Perri Young with 117, while Stella Hetherington and Marcia Kelly were runners up.