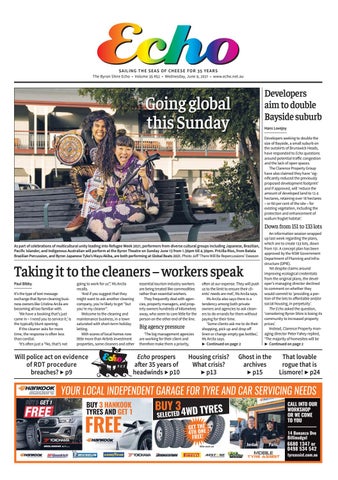 Hans Lovejoy Developers seeking to double the size of Bayside, a small suburb on the outskirts of Brunswick Heads, have responded to Echo questions around potential traffic congestion and the lack of open spaces. The Clarence Property Group have also claimed they have ‘significantly reduced the previously proposed development footprint’ and if approved, will ‘reduce the amount of developed land to 12.4 hectares, retaining over 18 hectares – or 60 per cent of the site – for existing vegetation, including the protection and enhancement of wallum froglet habitat’.

Down from 151 to 133 lots As part of celebrations of multicultural unity leading into Refugee Week 2021, performers from diverse cultural groups including Japanese, Brazilian, Pacific Islander, and Indigenous Australian will perform at the Byron Theatre on Sunday June 13 from 1.30pm till 4.30pm. Pricilla Rios, from Batala Brazilian Percussion, and Byron Japanese Tyko’s Mayu Akiba, are both performing at Global Beats 2021. Photo Jeff ‘There Will Be Repercussions’ Dawson

Taking it to the cleaners – workers speak Paul Bibby It’s the type of text message exchange that Byron cleaning business owners like Cristina Arcila are becoming all too familiar with. ‘We have a booking that’s just come in – I need you to service it,’ is the typically blunt opening. If the cleaner asks for more time, the response is often less than cordial. ‘It’s often just a “No, that’s not

going to work for us”,’ Ms Arcila recalls. ‘And if you suggest that they might want to ask another cleaning company, you’re likely to get “but you’re my cleaner”. Welcome to the cleaning and maintenance business, in a town saturated with short-term holiday letting. With scores of local homes now little more than Airbnb investment properties, some cleaners and other

Will police act on evidence of RDT procedure breaches? ▶ p9

essential tourism industry workers are being treated like commodities rather than essential workers. They frequently deal with agencies, property managers, and property owners hundreds of kilometres away, who seem to care little for the person on the other end of the line.

Big agency pressure ‘The big management agencies are working for their client and therefore make them a priority,

often at our expense. They will push us to the limit to ensure their clients’ needs are met’, Ms Arcila says. Ms Arcila also says there is a tendency among both private owners and agencies to ask cleaners to do errands for them without paying for their time. ‘Some clients ask me to do their shopping, pick up and drop off linen or change empty gas bottles’, Ms Arcila says. ▶ Continued on page 2

An information session wrapped up last week regarding the plans, which are to create 133 lots, down from 151. A concept plan has been approved by the NSW Government Department of Planning and Infrastructure (DPIE). Yet despite claims around improving ecological credentials from the original plans, the developer’s managing director declined to comment on whether they would commit to ‘providing a portion of the lots to affordable and/or social housing, in perpetuity’. The Echo asked the question, ‘considering Byron Shire is losing its community to increased property prices’. Instead, Clarence Property managing director Peter Fahey replied, ‘The majority of homesites will be ▶ Continued on page 2

Ghost in the archives ▶ p15

That lovable rogue that is Lismore! ▶ p24