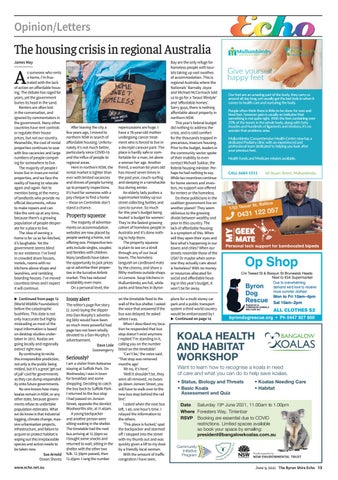 The housing crisis in regional Australia James May

s someone who rents a home, I’m frustrated with the lack of action on affordable housing. The debate has raged for years, yet the government buries its head in the sand. Renters are often lost in the conversation, and ignored by commentators in the government. Many other countries have rent controls or regulate their house prices, but not our country. Meanwhile, the cost of rental properties continues to soar with few vacancies and large numbers of people competing for somewhere to live. The majority of people I know live in insecure rental properties, and we face the reality of having to relocate again and again. Not to mention being at the mercy of landlords who provide no official documents, refuse to make repairs and can hike the rent up at any time, because there’s a growing population of people desperate for a place to live. The idea of owning a home is for us so far-fetched, it’s laughable. Yet the government seems blind to our existence. I’ve lived in crowded share houses, motels, rooms with no kitchens above shops and laundries, and rambling boarding houses. I’ve moved countless times and I expect it will continue.

After leaving the city a few years ago, I moved to northern NSW in search of affordable housing. Unfortunately it’s not much better, particularly since COVID-19 and the influx of people to regional areas. Here in northern NSW, the rental market is tighter than ever with limited vacancies and droves of people turning up to property inspections. It’s hard for someone with a pay cheque to find a home – those on Centrelink don’t stand a chance.

Property squeeze The majority of advertisements on accommodation websites are now placed by people seeking a home, not offering one. Prospective tenants include singles, couples and families with children. Many landlords have taken the opportunity to jack prices up or advertise their properties in the lucrative Airbnb market. This has reduced availability even more. On a personal level, the

(World Wildlife Foundation) before the catastrophic bushfires. This date is not only inaccurate but highly misleading as most of the input information is based on desktop studies undertaken in 2012. Koalas are going locally and regionally extinct right now. By continuing to recite this irresponsible prediction, not only is the public being misled, but it’s a great ‘get out of jail’ card for governments as they can dump responsibility onto future governments. No one knows how many koalas remain in NSW, or any other state, because governments refuse to undertake population estimates. What we do know is that industrial logging, climate change, massive urbanisation projects, infrastructure, and failure to acquire or protect habitat is wiping out this irreplaceable species and action needs to be taken now. Sue Arnold Ocean Shores

Seriously? I am a visitor from Aotearoa staying at Suffolk Park. On Wednesday I was in town for breakfast and some shopping. Deciding to catch the bus back to Suffolk Park I returned to the bus stop I had passed on Jonson Street, opposite the derelict Woolworths site, at 11.45am. A young backpacker and another person were sitting waiting in the shelter. The timetable had the next bus arriving at 12.30pm so I bought some snacks and returned to wait, sitting in the shelter with the other two folk. 12.30pm passed, then 12.45pm. I rang the number

repercussions are huge. I have a 76-year-old mother undergoing cancer treatment who is forced to live in a decrepit caravan park. The place is hardly safe or comfortable for a man, let alone a woman her age. Another friend, a woman 60 years old has moved seven times in the past year, couch-surfing and sleeping in a ramshackle bus during winter. An elderly lady pushes a supermarket trolley up our street collecting bottles and cans to survive. So much for this year’s budget being touted ‘a budget for women.’ They’re the fastest growing cohort of homeless people in Australia and it’s done nothing to help them. The property squeeze is plain to see on a stroll through any of our local towns. The homeless languish on cardboard mats by the cinema, and share a filthy mattress outside shops in Lismore. Soup kitchens in Mullumbimby are full, while parks and beaches in Byron on the timetable fixed to the wall of the bus shelter. I asked the voice that answered if the bus was delayed, he asked where I was. When I described my location he responded that bus stop doesn’t exist anymore. I replied ‘I’m standing in it, calling you on the number listed on the timetable’. ‘Can’t be,’ the voice said. ‘That stop was removed months ago’. ‘Ah no, it’s here’. ‘Well it shouldn’t be, they were all removed, no buses go down Jonson Street, you will have to walk over to the new bus stop behind the rail line’. I asked when the next bus left, 1.45: one hour’s time. I relayed the information to the others. ‘This place is fucked,’ spat the backpacker and stormed off. I stepped into the street with my thumb out and was quickly given a lift to my door by a friendly local woman. With the amount of traffic congestion I have seen,

Bay are the only refuge for homeless people with tourists taking up vast swathes of accommodation. This is regional Australia where the Nationals’ Barnaby Joyce and Michael McCormack told us to go for a ‘beaut lifestyle’ and ‘affordable homes’. Sorry guys, there is nothing affordable about property in northern NSW. This year’s federal budget did nothing to address the crisis, and is cold comfort for the thousands trapped in precarious, insecure housing. Prior to the budget, leaders in the community sector spoke of their inability to even contact Michael Sukkar, the federal housing minister. Perhaps he had nothing to say. While tax incentives continue for home owners and investors, no support was offered for renters or the homeless. Do these politicians in the coalition government live on another planet? They seem oblivious to the growing divide between wealthy and poor in this country. The lack of affordable housing is a symptom of this. When will they open their eyes and face what’s happening in our towns and cities? When our streets resemble those of the USA? Or maybe when someone they actually care about is homeless? With no money or resources allocated for social and affordable housing in this year’s budget, it won’t be far away. plans for a multi storey car park and a public transport system a third world country would be embarrassed by I ▶ Continued on page 14

Give yourself happy feet Our feet are an amazing part of the body, they carry us around all day long, yet usually get the last look in when it comes to health care and nurturing the body. ;orѴ;o[;m|_bmh|_;u;bvѴbѴ;|o0;7om;=ouvou;-m7 ঞu;7=;;|ķ_o;;ur-bmbvv-ѴѴ-mbm7b1-|ou|_-| vol;|_bm]bvmo|tb|;ub]_|ĺ)b|_|_;=;;|1om|-bmbm]o;u 25% of the bones in the whole body, along with forty muscles and hundreds of ligaments and tendons, it’s no wonder that problems arise. ѴѴl0bl0olru;_;mvb;;-Ѵ|_;m|u;mo_-v- dedicated Podiatry clinic with an experienced and ruo=;vvbom-Ѵ|;-l7;7b1-|;7|o_;Ѵrbm]oѴooh-[;u your precious feet. ;-Ѵ|_=m7v-m7;7b1-u;u;0-|;v--bѴ-0Ѵ;ĺ

KOALA HEALTH AND HABITAT WORKSHOP Want to learn how to recognise a koala in need of care and what you can do to help save koalas. • Status, Biology and Threats • Basic Koala Assessment and Quiz