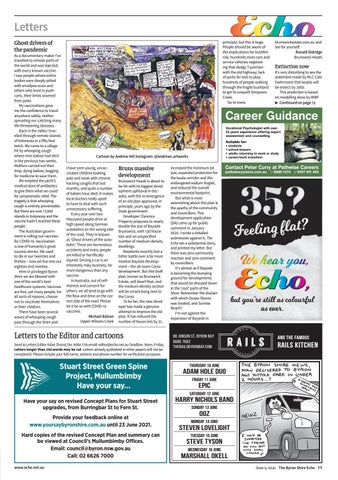 Letters Ghost drivers of ƐĲĕȞżëŕĎĕŔĶĈ As a documentary maker I’ve travelled to remote parts of the world and was injected with every known vaccine. I saw people whose entire bodies were deeply pitted with smallpox scars and others who lived in pushcarts, their limbs wizened from polio. My vaccinations gave me the confidence to travel anywhere safely, neither spreading nor catching many life-threatening diseases. Back in the 1980s I travelled through remote islands of Indonesia in a fifty foot ketch. We came to a village hit by whooping cough where nine babies had died in the previous two weeks. Mothers carried out their limp, dying babies, begging for medicine to save them. We emptied the yacht’s medical store of antibiotics to give them what we could for symptomatic relief. The tragedy is that whooping cough is entirely preventable. But there are over 17,000 islands in Indonesia and the vaccine hadn’t reached these people. The Australian government is rolling out vaccines for COVID-19. Vaccination is one of humanity’s great success stories. We used to die in our twenties and thirties – now we live into our eighties and nineties. Here in privileged Byron Shire we are blessed with one of the world’s best healthcare systems. Vaccines are free, yet many people, for all sorts of reasons, choose not to vaccinate themselves or their children. There have been several waves of whooping cough pass through the Shire and

brunswickestate.com.au and see for yourself. Russell Eldridge Brunswick Heads

principle, but this is huge. People should be aware of the implications for bushfire risk, hundreds more cars and service vehicles negotiating that dodgy T-junction with the old highway; lack of parks for kids to play; hundreds of people walking through the fragile bushland to get to unspoilt Simpsons Creek. Go to www.

0ƶƐĶŕĈƐĶşŕŕşƱ It’s very disturbing to see the statement made by MLC Cate Faehrmann that koalas will be extinct by 2050. This prediction is based on modelling done by WWF ▶ Continued on page 13

Cartoon by Andrew Hill Instagram: @andrews.artworks I have seen young, unvaccinated children looking pale and weak with chronic hacking coughs that last months, and quite a number of babies have died. It makes local doctors really upset to have to deal with such unnecessary suffering. Every year over two thousand people drive at high speed along German autobahns on the wrong side of the road. They’re known as ‘Ghost drivers of the autobahn’. There are horrendous accidents and many people are killed or horrifically injured. Driving a car is an inherently risky business, far more dangerous than any vaccine. In Australia, out of selfinterest and concern for others, we all tend to go with the flow and drive on the correct side of the road. Please let it be so with COVID-19 vaccines. Michael Balson Upper Wilsons Creek

ſƖŕƆŔëƆƆĶưĕ ĎĕưĕōşżŔĕŕƐ Brunswick Heads is about to be hit with its biggest development upheaval in decades, with the re-emergence of an old plan approved, in principle, years ago by the State government. Developer Clarence Property proposes to nearly double the size of Bayside Brunswick, with 130 house lots and an unspecified number of medium-density dwellings. Residents recently lost a bitter battle over a far more modest Bayside development – the 38-room Corso development. But this draft plan, known as Brunswick Estate, will dwarf that, and the medium-density section will be smack-bang next to the Corso. To be fair, the new developer has made a genuine attempt to improve the old plan. It has reduced the number of house lots by 31,

Letters to the Editor and cartoons Send to Letters Editor Aslan Shand, fax: 6684 1719 email: editor@echo.net.au Deadline: Noon, Friday. Letters longer than 200 words may be cut. Letters already published in other papers will not be considered. Please include your full name, address and phone number for verification purposes.

increased the minimum lot size, expanded protection for the koala corridor and the endangered wallum froglet, and reduced the overall environmental footprint. But what is most astonishing about this plan is the apathy of the community and councillors. This development application (DA) came up for public comment in January 2020. I wrote a detailed submission against it, The Echo ran a substantial story, and printed my letter. But there was zero community reaction and zero comment by councillors. It’s almost as if Bayside is becoming the dumping ground for developments that would be shouted down in the ‘cool’ parts of the Shire. Remember the disdain with which Ocean Shores was treated, and Sunrise Beach? I’m not against the expansion of Bayside in

Have your say on revised Concept Plans for Stuart Street upgrades, from Burringbar St to Fern St. Provide your feedback online at www.yoursaybyronshire.com.au until 23 June 2021. Hard copies of the revised Concept Plan and summary can be viewed at Council’s Mullumbimby Offices. Email: council@byron.nsw.gov.au Call: 02 6626 7000 www.echo.net.au