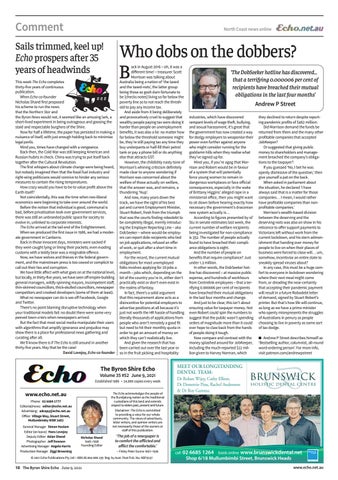 Who dobs on the dobbers?

Sails trimmed, keel up! Echo prospers after 35 years of headwinds This week The Echo completes thirty-five years of continuous publication. When Echo co-founder Nicholas Shand first proposed his scheme to run the news that the Northern Star and the Byron News would not, it seemed like an amusing lark, a short-lived experiment in being outrageous and goosing the staid and respectable burghers of the Shire. Now for half a lifetime, the paper has persisted in making a nuisance of itself, with just enough holding back to minimise legal perils. Mind you, times have changed with a vengeance. Back then, the Cold War was still keeping American and Russian hubris in check. China was trying to put itself back together after the Cultural Revolution. The first whispers about climate change were being heard, but nobody imagined then that the fossil fuel industry and right-wing politicians would connive to hinder any serious measures to contain the rising temperatures. How crazy would you have to be to value profit above the Earth itself? Not coincidentally, this was the time when neo-liberal economics were beginning to take over around the world. Before the notion that individual is good, communal is bad, before privatisation took over government services, there was still an unbranded public space for society to evolve in, unlinked to corporate interests. The Echo arrived at the tail-end of the Enlightenment. When we produced the first issue in 1986, we had a moderate government in Canberra. Back in those innocent days, ministers were sacked if they were caught lying or lining their pockets; even evading customs with a teddy bear was a resignable offence. Now, we have wolves and thieves in the federal government, and the mainstream press is too cowed or complicit to call out their lies and corruption. We have little affect with what goes on at the national level, but locally, in thirty-five years, we have seen off empire-building general managers, wildly spinning mayors, incompetent staff, thin-skinned councillors, thick-skulled councillors, newspaper competitors and crooked developers (some of them at least). What no newspaper can do is see off Facebook, Google and Twitter. There’s no point blaming disruptive technology when your traditional models fail: no doubt there were some very peeved town-criers when newspapers arrived. But the fact that most social media manipulate their users with algorithms that amplify ignorance and prejudice may show there is a place for professional news gathering and curating after all. We’ll know there is if The Echo is still around in another thirty-five years. May that be the case! David Lovejoy, Echo co-founder

ack in August 2016 – oh, it was a different time! – treasurer Scott Morrison was talking about Australia being a nation of ‘the taxed and the taxed-nots’, the latter group being those so gosh darn fortunate to be [checks notes] living so far below the poverty line as to not reach the threshold to pay any income tax. And aside from it being deliberately and provocatively cruel to suggest that wealthy people paying tax were doing it harder than people on unemployment benefits, it was also a lie: no matter how far below the threshold someone might be, they’re still paying tax any time they buy underpants or half-fill their petrol tank or pay a phone bill or do anything else that attracts GST. However, the childishly nasty tone of Morrison’s whining criticism definitely made clear to anyone wondering if Morrison was concerned about the welfare of those actually on welfare, that the answer was, and remains, a thundering ‘Nup’. And now, many years down the track, we have the sight of his best pal and current Employment Minister, Stuart Robert, fresh from the triumph that was the courts finding robodebt to be completely illegal, merrily introducing the Employer Reporting Line – aka DobSeeker – where would-be employers can report dole recipients who lied on job applications, refused an offer of work, or quit after a short time in employment. For the record, the current mutual obligations for most unemployed folks involves applying for 20 jobs a month – jobs which, depending on the bit of the country you’re in, either don’t practically exist or don’t even exist in the realms of fantasy.  In fact, there’s a solid argument that this requirement alone acts as a disincentive for potential employers to advertise positions at all because it’s just not worth the HR hassle of handling literally thousands of applications from people who aren’t remotely a good fit but need to hit their monthly quota in order to get an amount of money on which they can’t realistically live. And given the research that has been carried out over the last year or so in the fruit picking and hospitality

Andrew P Street industries, which have discovered rampant levels of wage theft, bullying, and sexual harassment, it’s great that the government has now created a way for dodgy employers to weaponise their power even further against anyone who might consider running for the goddamn hills when they realise what they’ve signed up for. Mind you, if you’re agog that Morrison and Robert would be in favour of a system that will potentially force young women to remain in dangerous workplaces or face official consequences, especially in the wake of Brittany Higgins’ alleged rape in a ministerial office, then you might want to sit down before hearing exactly how necessary the government’s draconian new system actually is… According to figures presented by ol’ Stu in senate estimates last week, the current number of welfare recipients being investigated for non-compliance is 352. The number of people actually found to have breached their compliance obligations is eight. And the number of people on benefits that require compliance? Just under 1.3 million.  In other words, the DobSeeker hotline has discovered – at massive public expense, and hundreds of workhours from Centrelink employees – that a terrifying 0.000006 per cent of recipients have breached their mutual obligations in the last four months and change. And just to be clear, this isn’t about ensuring value for taxpayer money. Not even Robert could spin the numbers to suggest that the public wasn’t spending orders of magnitude more than it could ever hope to claw back from the hands of people doing it tough.  Now compare and contrast with the money splashed around for JobKeeper, including the much-reported $22 million given to Harvey Norman, which

they declined to return despite reporting pandemic profits of $462 million. Did Morrison demand the funds be returned from them and the many other profitable companies that accepted JobKeeper? Or suggested that giving public money to shareholders and management breached the company’s obligations to the taxpayer?  If you guessed ‘No, I bet he was openly dismissive of the question,’ then give yourself a pat on the back. When asked in parliament about the situation, he declared ‘I have always said that is a matter for those companies… I mean, I would rather have profitable companies than nonprofitable companies.’  Morrison’s wealth-based division between the deserving and the deserving-nots was also on show in his reticence to offer support payments to Victorians left without work from the current lockdown, and his stern admonishment that handing over money for people to live on when their places of business were forced to close will… um, somehow, incentivise an entire state to sneakily spread viruses about? In any case, this must be a huge comfort to everyone in lockdown wondering where their next meal might come from, or dreading the near-certainty that accepting their pandemic payment will result in a future Robodebt letter of demand, signed by Stuart Robert’s printer. But that’s how life will continue, as long as we have a prime minister who openly misrepresents the struggles of Australians in penury as people choosing to live in poverty as some sort of tax dodge. Q Andrew P Street describes himself as ‘Bestselling author, columnist, all-round word-ordering person’. For more info, visit patreon.com/andrewpstreet

‘The job of a newspaper is to comfort the afflicted and afflict the comfortable.’ – Finley Peter Dunne 1867–1936