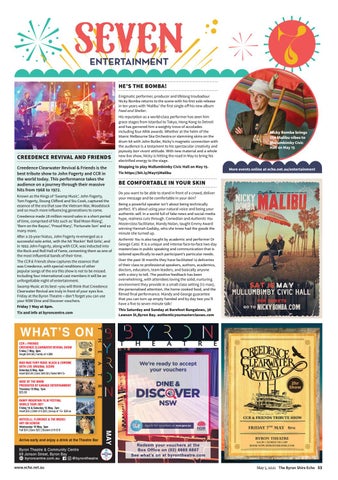 ENTERTAINMENT HE’S THE BOMBA! Enigmatic performer, producer and lifelong troubadour Nicky Bomba returns to the scene with his first solo release in ten years with ‘Malibu’ the first single off his new album Food and Shelter.

CREEDENCE REVIVAL AND FRIENDS Creedence Clearwater Revival & Friends is the best tribute show to John Fogerty and CCR in the world today. This performance takes the audience on a journey through their massive hits from 1968 to 1972. Known as the Kings of ‘Swamp Music’, John Fogerty, Tom Fogerty, Doung Clifford and Stu Cook, captured the essence of the era that saw the Vietnam War, Woodstock and so much more influencing generations to come. Creedence made 28 million record sales in a short period of time, comprised of hits such as ‘Bad Moon Rising’, ‘Born on the Bayou’, ‘Proud Mary’, ‘Fortunate Son’ and so many more. After a 25-year hiatus, John Fogerty re-emerged as a successful solo artist, with the hit ‘Rockin’ Roll Girls’, and in 1993 John Fogerty, along with CCR, was inducted into the Rock and Roll Hall of Fame, cementing them as one of the most influential bands of their time. The CCR & Friends show captures the essence that was Creedence, with special renditions of other popular songs of the era this show is not to be missed. Including four international cast members it will be an unforgettable night of entertainment. Swamp Music at its best –you will think that Creedence Clearwater Revival are truly in front of your eyes live. Friday at the Byron Theatre – don’t forget you can use your NSW Dine and Discover vouchers. Friday 7 May at 8pm. Tix and info at byroncentre.com

His reputation as a world-class performer has seen him grace stages from Istanbul to Tokyo, Hong Kong to Detroit and has garnered him a weighty trove of accolades including four ARIA awards. Whether at the helm of the titanic Melbourne Ska Orchestra or slamming skins on the drum kit with John Butler, Nicky’s magnetic connection with the audience is a testament to his spectacular creativity and joyously bon vivant attitude. With new material and a whole new live show, Nicky is hitting the road in May to bring his electrified energy to the stage. Stopping to play Mullumbimby Civic Hall on May 15. Tix https://bit.ly/May15Malibu

BE COMFORTABLE IN YOUR SKIN Do you want to be able to stand in front of a crowd, deliver your message and be comfortable in your skin? Being a powerful speaker isn’t about being technically perfect. It’s about using your natural voice and being your authentic self. In a world full of fake news and social media hype, realness cuts through. Comedian and Authentic You Masterclass facilitator, Mandy Nolan, taught Emmy Award winning Hannah Gadsby, who she knew had the goods the minute she turned up. Authentic You is also taught by academic and performer Dr George Catsi. It is a unique and intense face-to-face two day masterclass in public speaking and communication that is tailored specifically to each participant’s particular needs. Over the past 18 months they have facilitated 14 deliveries of their class to professional speakers, authors, academics, doctors, educators, team leaders, and basically anyone with a story to tell. The positive feedback has been overwhelming, with attendees loving the solid, nurturing environment they provide in a small class setting (12 max), the personalised attention, the home cooked food, and the filmed final performance. Mandy and George guarantee that you can turn up empty handed and by day two you’ll have a five to seven minute talk! This Saturday and Sunday at Barefoot Bungalows, 38 Lawson St,Byron Bay. authenticyoumasterclasses.com

WIDE OF THE MARK PRESENTED BY GARAGE ENTERTAINMENT Thursday 13 May, 7pm $25.50

Arrive early and enjoy a drink at the Theatre Bar