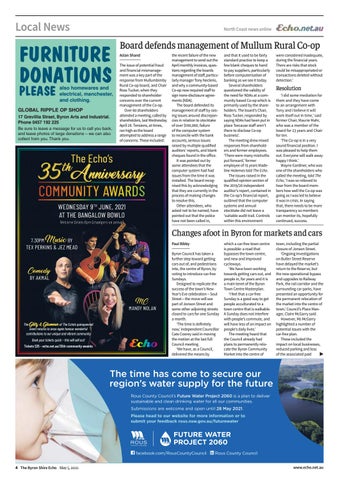 GLOBAL RIPPLE OP SHOP 17 Grevillia Street, Byron Arts and Industrial. Phone 0457 192 225 Be sure to leave a message for us to call you back, and leave photos of large donations – we can also collect from you. Thank you.

Board defends management of Mullum Rural Co-op Aslan Shand The issue of potential fraud and financial mismanagement was a key part of the response from Mullumbimby Rural Co-op board, and Chair Ross Tucker, when they responded to shareholder concerns over the current management of the Co-op. Over 60 shareholders attended a meeting, called by shareholders, last Wednesday April 28. Tensions, at times, ran high as the board attempted to address a range of concerns. These included:

the recent failure of the new management to send out the April monthly invoices, questions regarding the boards management of staff, particularly manager Tony Neclerio, and why a community-based Co-op now required staff to sign none-disclosure agreements (NDA). The board defended its management of staff by raising issues around discrepancies in relation to stocktake of over $100,000, failure of the computer system to reconcile with the bank accounts, serious issues raised by multiple qualified auditors’ reports, and blank cheques found in the office. It was pointed out by some attendees that the computer system had had issues from the time it was installed. The board recognised this by acknowledging that they are currently in the process of making changes to resolve this. Other attendees, who asked not to be named, have pointed out that the police have not been called in,

and that it used to be fairly standard practice to keep a few blank cheques to hand to pay suppliers, particularly before computerisation of banking as we see it today. Several shareholders questioned the validity of the need for NDAs at a community based Co-op which is primarily used by the shareholders. The board’s Chair, Ross Tucker, responded by saying NDAs had been put in place ‘because staff aren’t there to disclose Co-op business’. The meeting drew mixed responses from shareholders and former employees. ‘There were many mistruths put forward,’ former employee of 15 years Madeline Holemes told The Echo. The issues raised in the qualified opinion section of the 2019/20 independent auditor’s report, contained in the Co-op’s financial report, outlined that the computer systems and annual stocktake did not leave a ‘suitable audit trail. Controls within this environment

were considered inadequate, during the financial years. There are risks that stock could be misappropriated or transactions deleted without detection.’

Resolution ‘I did some mediation for them and they have come to an arrangement with Tony and I believe it will work itself out in time,’ said former Chair, Maurie Mahr, who was a member of the board for 23 years and Chair for ten. ‘The Co-op is in a very sound financial position. I was pleased to help them out. Everyone will walk away happy I think.’ Wayne Gardiner, who was one of the shareholders who called the meeting, told The Echo, ‘I was so relieved to hear from the board members how well the Co-op was going as I was led to believe it was in crisis. In saying that, there needs to be more transparency so members can monitor its, hopefully continued, success.

Changes afoot in Byron for markets and cars Paul Bibby

The Glitz & Glamour of The Echo’s quinquennial event returns to once again honour wonderful contributions to our unique and vibrant community Book your tickets quick – this will sell out! Tickets $25 – echo.net.au/35th-community-awards

Byron Council has taken a further step toward getting cars out of, and pedestrians into, the centre of Byron, by voting to introduce car-free Sundays. Designed to replicate the success of the town’s New Year’s Eve celebration – Soul Street – the move will see part of Jonson Street and some other adjoining streets closed to cars for one Sunday a month. ‘The time is definitely now,’ independent Councillor Cate Coorey said in moving the motion at the last full Council meeting. ‘We have, as a Council, delivered the means by

which a car-free town centre is possible: a road that bypasses the town centre, and new and improved cycleways. ‘We have been working towards getting cars out, and people in, for years and it is a main tenet of the Byron Town Centre Masterplan. ‘I feel that a car-free Sunday is a good way to get people acculturated to a town centre that is walkable. A Sunday does not interfere with people’s commute, and will have less of an impact on people’s daily lives.’ The meeting heard that the Council already had plans to permanently relocate the Byron Community Market into the centre of

town, including the partial closure of Jonson Street. ‘Ongoing investigations on Butler Street Reserve have delayed the market’s return to the Reserve, but the now operational bypass and upgrades to Railway Park, the rail corridor and the surrounding car parks, have presented an opportunity for the permanent relocation of the market into the centre of town,’ Council’s Place Manager, Claire McGarry said. However, Ms McGarry highlighted a number of potential issues with the car-free plan. These included the impact on local businesses, reduced parking and loss of the associated paid