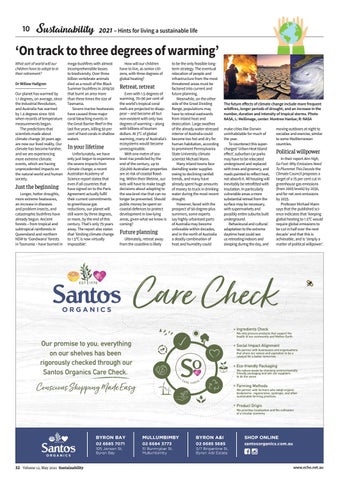 ‘On track to three degrees of warming’ What sort of world will our children have to adapt to in their retirement? Dr Willow Hallgren Our planet has warmed by 1.1 degrees, on average, since the Industrial Revolution, and Australia has warmed by 1.4 degrees since 1910 when records of temperature measurements began. The predictions that scientists made about climate change 30 years ago are now our lived reality. Our climate has become harsher, and we are experiencing more extreme climatic events, which are having unprecedented impacts on the natural world and human society.

Just the beginning Longer, hotter droughts, more extreme heatwaves, an increase in diseases and problem insects, and catastrophic bushfires have already begun. Ancient forests – from tropical and subtropical rainforests in Queensland and northern NSW to ‘Gondwana’ forests in Tasmania – have burned in

mega-bushfires with almost incomprehensible losses to biodiversity. Over three billion vertebrate animals died as a result of the Black Summer bushfires in 2019/20 that burnt an area more than three times the size of Tasmania. Severe marine heatwaves have caused three major coral bleaching events in the Great Barrier Reef in the last five years, killing 50 per cent of hard corals in shallow waters.

In your lifetime Unfortunately, we have only just begun to experience the severe impacts from climate change; a recent Australian Academy of Science report states that even if all countries that have signed on to the Paris Agreement actually fulfil their current commitments to greenhouse gas reductions, our planet will still warm by three degrees, or more, by the end of this century. That’s only 79 years away. The report also states that ‘limiting climate change to 1.5°C is now virtually impossible’.

How will our children have to live, as senior citizens, with three degrees of global heating?

Retreat, retreat Even with 1.5 degrees of warming, 70–90 per cent of the world’s tropical coral reefs are projected to disappear – and become all but non-existent with only two degrees of warming – along with billions of tourism dollars. At 3°C of global warming, many of Australia’s ecosystems would become unrecognisable. With one metre of sealevel rise predicted by the end of the century, up to 250,000 Australian properties are at risk of coastal flooding. Within their lifetime, our kids will have to make tough decisions about adapting to the sea-level rise that can no longer be prevented. Should public money be spent on coastal defences to protect development in low-lying areas, given what we know is coming?

Future planning Ultimately, retreat away from the coastline is likely

to be the only feasible longterm strategy. The eventual relocation of people and infrastructure from the most threatened areas must be factored into current and future planning. Meanwhile, on the other side of the Great Dividing Range, populations may have to retreat eastwards from inland heat and desiccation. Large swathes of the already water-stressed interior of Australia could become too hot and dry for human habitation, according to prominent Pennsylvania State University climate scientist Michael Mann. Many inland towns face dwindling water supplies owing to declining rainfall trends, and many have already spent huge amounts of money to truck in drinking water during the most recent drought. However, faced with the prospect of 50-degree-plus summers, some experts say highly urbanised parts of Australia may become unliveable within decades, and in the north of Australia a deadly combination of heat and humidity could

The future effects of climate change include more frequent wildfires, longer periods of drought, and an increase in the number, duration and intensity of tropical storms. Photo NASA, L: Mellimage, center: Montree Hanlue; R: NASA make cities like Darwin uninhabitable for much of the year. To counteract this supercharged ‘Urban Heat Island effect’, suburban car parks may have to be relocated underground and replaced with trees and greenery, and roads painted to reflect heat, not absorb it. All housing will inevitably be retrofitted with insulation. In particularly vulnerable areas a more substantial retreat from the surface may be necessary, with supermarkets and possibly entire suburbs built underground. Behavioural and cultural adaptation to the extreme daytime heat could see us retreating indoors and sleeping during the day, and

moving outdoors at night to socialise and exercise, similar to some Mediterranean countries.

Political willpower In their report Aim High, Go Fast: Why Emissions Need To Plummet This Decade the Climate Council proposes a target of a 75 per cent cut in greenhouse gas emissions (from 2005 levels) by 2030, and for net zero emissions by 2035. Professor Michael Mann says that the published science indicates that ‘keeping global heating to 1.5°C would require global emissions to be cut in half over the next decade’ and that this is achievable, and is ‘simply a matter of political willpower’.

We only procure products that support the health of our community and Mother Earth.

Our promise to you, everything on our shelves has been rigorously checked through our Santos Organics Care Check.

Social Impact Alignment We partner with businesses and organisations that share our values and aspiration to be a catalyst for a better tomorrow.

Eco-friendly Packaging We reduce waste by choosing environmentally friendly packaging and ask our suppliers to do the same.

Product Origin We prioritise localisation and the cultivation of a circular economy.