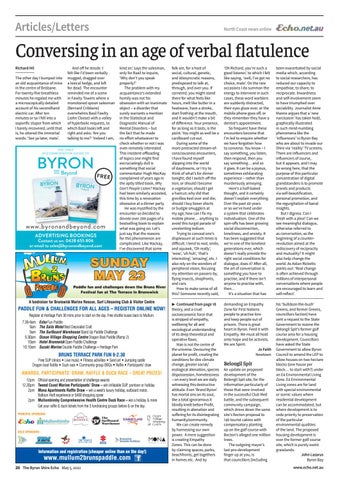 !şŕưĕſƆĶŕīĶŕëŕëīĕşĪưĕſćëōǖëƐƖōĕŕĈĕ Richard Hil The other day I bumped into an old acquaintance of mine in the centre of Brisbane. For twenty-five breathless minutes he regaled me with a microscopically detailed account of his secondhand electric car. After ten minutes or so I fell into a soporific stupor from which I barely recovered, until that is, he uttered the immortal words: ‘See ya later, mate’.

And off he strode. I felt like I’d been verbally mugged, dragged over a lexical hedge, and left for dead. The encounter reminded me of a scene in Fawlty Towers where a monotoned spoon salesman (Bernard Cribbens) overwhelms Basil Fawlty (John Cleese) with a volley of hyperbolic requests, to which Basil looks left and right and asks: ‘Are you talking to me?’ ‘Indeed I am,

kind sir,’ says the salesman, only for Basil to inquire, ‘Why don’t you speak properly?’ The problem with my acquaintance’s extended homily was not his obsession with an inanimate object – a disorder that surely warrants a mention in the Statistical and Diagnostic Manual of Mental Disorders – but the fact that he made no effort whatsoever to check whether or not I was even remotely interested. This insistent offloading of topics one might find excruciatingly dull is something that social commentator Hugh MacKay complained of years ago in the aptly titled book, Why Don’t People Listen? Mackay had been similarly accosted, this time by a renovation obsessive at a dinner party. He was mystified by the encounter so decided to devote over 200 pages of a bestselling book to explain what was going on. Let’s just say that the reasons for this phenomenon are complicated. Like Mackay, I’ve discovered that some

Information and registration (cheaper online than on the day!)

folk are, for a host of social, cultural, genetic, and idiosyncratic reasons, predisposed to talk at, through, and over you. If cornered, you might stand there for what feels like hours, melt like butter in a heatwave, have a stroke, start frothing at the mouth, and it wouldn’t make a bit of difference. Your presence, for as long as it lasts, is the point. You might as well be a cardboard cut-out. During some of the more protracted stream-ofconsciousness encounters, I have found myself slipping into the world of daydreams, or I try to think of what’s for dinner tonight; did I switch off the iron; or should I become a vegetarian; should I get a haircut; why did that grevillea keel over and die; should I buy boxer shorts or budgie smugglers at my age; how can I fix my mobile phone… anything to avoid this turgid parade of unrelenting tedium. Trying to conceal one’s displeasure at such times is difficult. I tend to nod, smile, and squawk, ‘Oh really’, ‘wow’, ‘uh huh’, ‘that’s interesting’, ‘amazing’, etc. I also rely on the wonders of peripheral vision, focusing my attention on passers-by, flying insects, shopfronts, and cars. How to make sense of all this? Someone recently said,

‘Oh Richard, you’re such a good listener,’ to which I felt like saying, ‘well, I’ve got no choice, mate’. On the rare occasions I do summon the energy to intervene in such cases, these word warblers are suddenly distracted, their eyes glaze over, or the mobile phone goes off, or they remember they have a dentist’s appointment. So frequent have these encounters become that I’m led to enquire whether we have forgotten how to converse. You know – I say something, you listen, then respond, then you say something… and so it goes. It can be a joyous, sometimes exhilarating experience – rather than murderously annoying. Here’s a half-baked thought, and it certainly doesn’t explain everything. Over the past 40 years or so we’ve lived under a system that celebrates individualism. One of the spin-offs has been growing social disconnection, loneliness, and anxiety. It has been suggested that we’re one of the loneliest generations ever, which doesn’t really provide the right social conditions for dialogue, does it? After all, the art of conversation is something you have to practise, and if there isn’t anyone to practise with, then… It’s a situation that has

been exacerbated by social media which, according to social researchers, has reduced our capacity to empathise, to share, to reciprocate. Inwardness and self-involvement seem to have triumphed over sociability. Journalist Anne Manne argues that a ‘new narcissism’ has taken hold, graphically illustrated in such mind-numbing phenomena like the ‘influencers’ in Byron Bay who are about to invade our Shire via ‘reality’ TV screens. There are influencers and influencers of course, but it appears, and I may be wrong here, that the purpose of this particular concentration of digital grandstanders is to promote brands and products via self-beautification, personal promotion, and the regurgitation of banal insights. But I digress. Can I finish with a plea? Can we see meaningful dialogue, otherwise referred to as conversation, as the beginning of a counterrevolution aimed at the rediscovery of reciprocity and mutuality? It might also help change the world. As Aidan Ricketts points out: ‘Real change is often achieved through millions of interpersonal conversations where people are encouraged to learn and self-reflect’.

demanding an Empathy Zone for First Nations people to practise lore and keep people out of prisons. There is great heart in Byron. Feed it with Empathy. We must all hold onto hope and be activists. We are Spirit. Jo Faith Newtown

his ‘bulldoze-the-bush’ Greens, and former Greens, councillors faction) have sent a request to the State Government to rezone the Belongil Spit’s former golf course area for a housing development. Councillors have asked the State Government to allow Byron Council to amend the LEP to allow houses on two hectare blocks (one house per block… to start with?) under an E4 Environmental Living Zone. E4 Environmental Living zones are for land with special environmental or scenic values where residential development can be accommodated, but where development is to cede priority to preservation of the particular environmental qualities of the land. The proposed housing development is over the former golf course site, which is purely exotic grasslands. John Lazarus Byron Bay

theory, and a cruel socioeconomic force that is stripped of empathy, wellbeing for all and sociological understanding of its deep theoretical and operative flaws. Man is not the centre of the universe. Devouring the planet for profit, creating the conditions for dire climate change, greater social/ ecological alienation, species dispossession, homelessness – on every level we are daily witnessing this destructive attitude. Even ‘Brand Byron’ has mortal sins on its soul, like a total ignoramous it blindly knelt before Profit, resulting in alienation and suffering for its disintegrating humanity/community. We can create remedy by harnessing our own power.  A mere suggestion is creating Empathy Zones. This can be done by claiming spaces, parks, beachfronts, get togethers in homes etc.  And by

Belongil Spit An update on proposed development of the Belongil Spit site, for the information particularly of those that were involved in the successful Club Med battle, and the subsequent community campaign, which drove down the same site’s Becton proposal to 140 tourist cabins with compensatory planting up on the golf course with Becton’s alleged one million trees. The outgoing mayor’s last pro-development finger up at you, is that councillors (including