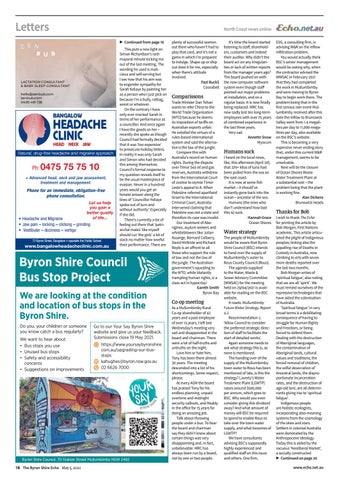 Phone for an immediate, obligation-free phone consultation. Let us help you gain a better quality of life...

This puts a new light on Simon Richardson’s rash mayoral minute kicking me out of the last meeting. The wording he used is malicious and self-serving but I see now that his aim was to engender sympathy for Sarah Ndiaye by painting her as a person who I just pick on because I’m a bully, ratbag, sexist or whatever. On the contrary I have only ever mocked Sarah in terms of her performance as a councillor. And once again I have the goods on her – recently she spoke as though Council had formally decided that it was ‘too expensive’ to prosecute holiday letters. In reality it was only Sarah and Simon who had decided this among themselves. Council’s formal response to my question reveals itself to be the usual masterpiece of evasion. Never in a hundred years would you get an honest answer along the lines of ‘Councillor Ndiaye spoke out of turn and without authority’. Especially if she did. There’s currently a lot of feeling out there that ‘patriarchal males’ like myself should cut ‘the girls’ a bit of slack no matter how woeful their performance. There are

Byron Shire Council Bus Stop Project We are looking at the condition and location of bus stops in the Byron Shire. Do you, your children or someone you know catch a bus regularly? We want to hear about: • Bus stops you use • Unused bus stops • Safety and accessibility concerns • Suggestions on improvements

Go to our Your Say Byron Shire website and give us your feedback. Submissions close 19 May 2021. https://www.yoursaybyronshire. com.au/upgrading-our-busstops kahughes@byron.nsw.gov.au 02 6626 7000

plenty of successful women out there who haven’t had to play that card, and it’s not a game in which I’m prepared to indulge. Shape up or ship out does it for me, especially when there’s attitude involved. Fast Buck$ Coorabell

Comparissons Trade Minister Dan Tehan wants to refer China to the World Trade Organisation (WTO) because he deems its imposition of tariffs on Australian exports unfair. He extolled the virtues of a rules-based international system and said the alternative is the law of the jungle.   Compare this with Australia’s record on human rights. During the dispute over Timor Sea oil and gas reserves, Australia withdrew from the International Court of Justice to stymie Timor Leste’s appeal to it. When Palestine referred apartheid Israel to the International Criminal Court, Australia intervened claiming that Palestine was not a state and therefore its case was invalid.  Our treatment of Aborigines, asylum seekers and whistleblowers like Julian Assange, Bernard Collaery, David McBride and Richard Boyle is an affront to all those who support the rule of law and not the law of the jungle. The Australian government’s squealing to the WTO, while blatantly trampling human rights, is a class act in hypocrisy! Gareth Smith Byron Bay

Co-op meeting As a Mullumbimby Rural Co-op shareholder of 42 years and a past employee of over 13 years, I left last Wednesday’s meeting very sad and disappointed in the board and chairman. There were a lot of half-truths and untruths on the night. Love him or hate him, Tony has been there almost 30 years. The meeting descended into a list of his shortcomings. Some respect, please. At every AGM the board has praised Tony for his endless planning, unpaid overtime and midnight security callouts, and Maddy in the office for 15 years for doing an amazing job. Talk about throwing people under a bus. To hear the board and chairman say they didn’t know about certain things was very disappointing and, in fact, unbelievable. MRC has always been run by a board, not by one or two people.

It’s time the board started listening to staff, shareholders, customers and indeed their auditor. Why didn’t the board act on any irregularities or lack of written reports from the manager years ago? The board pushed on with the new computer software system even though staff pointed out major problems at installation, and on a regular basis. It is now finally being replaced. MRC has now sadly lost ten long-term employees with over 75 years of combined experience in the last three years. Very sad. Annette Snow Myocum

Humans suck I heard on the local news, like, this afternoon (April 20), that 370+ kilos of tuna had been pulled from the sea on the east coast. It is now at some fish market – it should’ve instantly gone back into the ocean – ancestor of the sea. Humans (the ones who don’t understand how bad this is) suck. Hannah Grace Ocean Shores

Water strategy The people of Mullumbimby would be aware that Byron Shire Council (BSC) intends to hand over the supply of Mullumbimby’s water to Rous County Council (Rous). The agenda supplied to the Water, Waste & Sewer Advisory Committee (WWSAC) for the meeting held on 29/04/2021 is available for reading on the BSC website. It reads: Mullumbimby Future Water Strategy, Report 4.2. Recommendation 2. ‘Allow Council to consider the preferred strategic direction of staff to facilitate the start of detailed works’. Again someone needs to ask what strategy this is, as none is mentioned. The handing over of the supply of the Mullumbimby town water to Rous has been mentioned of late, is this the strategy? Laverty’s Water Treatment Plant (LGWTP) raises around $500,000 per annum, which goes to BSC. Why would you even consider giving this dividend away? And what amount of money will BSC be required to spend to enable Rous to take over the town water supply, and what becomes of LGWTP? We have consultants advising BSC’s supposedly highly experienced and qualified staff on this issue and others. One firm,

EDS, a consulting firm, is advising W&R on the inflow infiltration problem.  You would actually think BSC’s senior management would be asking why, when the contractor advised the WWSAC in February 2021 that they had completed the work in Mullumbimby and were moving to Byron Bay to begin work there. The problem being that in the first serious rain event Mullumbimby received after this date the inflow to Brunswick Valley went from 1.4 megalitres per day to 11,000 megalitres per day, also available on the BSC’s website. This is becoming a very expensive never ending story that, under this current W&R management, seems to be unsolvable. Next will be the closure of Ocean Shores Waste Water Treatment Plant at a substantial cost – the problem being that the plant is working fine. Alan Dickens Brunswick Heads

Thanks for Bob I wish to thank The Echo for printing the article by Bob Morgan, First Nations academic. This article articulated the plight of Indigenous peoples; linking also the appalling rise of Deaths in Custody in Australia, now climbing to 479 with seven more deaths reported over the last two months. Bob Morgan writes of ‘spiritual fatigue’, also noting that we are all ‘spirit’.  We must remind ourselves of the repressive technologies that have aided the colonisation of Australia.  ‘Spiritual fatigue’ in very broad terms is a debilitating consequence of having to struggle for Human Rights and Freedom, or being forced to defend them. Dealing with the destruction of Aboriginal languages, the contamination of Aboriginal lands, cultural values and traditions, the forced removal of children, the wilful desecration of Ancestral lands, the disproportionate incarceration rates, and the destruction of age-old lore, are all determinants giving rise to ‘spiritual fatigue’. Indigenous people are holistic ecologists, incorporating also-meaning systems from the cosmology of the skies and stars. Settlers in colonial Australia were dominated by the Anthropocene ideology. Today this is aided by the vacuous ‘Neoliberal Market’, a socially constructed ▶ Continued on page 20 www.echo.net.au