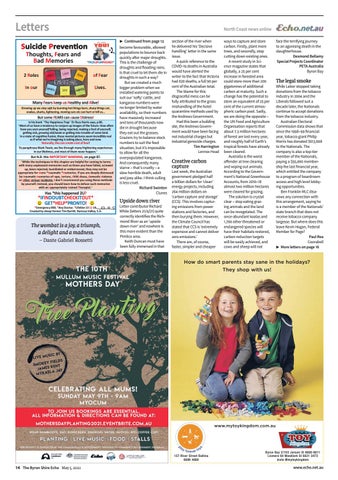 The wombat is a joy, a triumph, a delight and a madness. – Dante Gabriel Rossetti

become favourable, allowed populations to bounce back quickly after major droughts. This is the challenge of droughts and flooding rains. Is that cruel to let them die in droughts in such a way? But we created a much bigger problem when we installed watering points to suit our ‘softy’ cattle, and kangaroo numbers were no longer limited by water availability, so their numbers have massively increased and tens of thousands now die in drought because they eat out the grasses. Graziers try to balance stock numbers to suit the feed situation, but it’s impossible to allow for all the overpopulated kangaroos. And consequently many starve – that’s cruelty – a slow horrible death, adult and joey alike. I think culling is less cruel. Richard Swinton Clunes

Upside down river Letter contributor Richard White (letters 21/4/21) quite correctly identifies the Richmond River as an ‘upside down river’ and nowhere is this more evident than the Pimlico area. Keith Duncan must have been fully immersed in that

section of the river when he delivered his ‘Decisive handling’ letter in the same issue. A quick reference to the COVID-19 deaths in Australia would have alerted the writer to the fact that Victoria had 820 deaths, a full 90 per cent of the Australian total. The blame for this disgraceful mess can be fully attributed to the gross mishandling of the hotel quarantine methods used by the Andrews Government. Had this been a building site, the Andrews Government would have been facing not industrial charges but industrial genocide charges. Tim Harrington  Lennox Head

Creative carbon capture Last week, the Australian government pledged half a billion dollars for ‘clean’ energy projects, including 264 million dollars on ‘carbon capture and storage’ (CCS). This involves capturing emissions from power stations and factories, and then burying them. However, the Climate Council has stated that CCS is ‘extremely expensive and cannot deliver zero emissions.’ There are, of course, faster, simpler and cheaper

ways to capture and store carbon. Firstly, plant more trees, and secondly, stop cutting down existing ones. A recent study in Science magazine states that globally, a 25 per cent increase in forested area could store more than 200 gigatonnes of additional carbon at maturity. Such a change has the potential to store an equivalent of 25 per cent of the current atmospheric carbon pool. Sadly, we are doing the opposite – the UN Food and Agriculture Organisation reports that about 7.3 million hectares of forest are lost every year, and roughly half of Earth’s tropical forests have already been cleared.  Australia is the worst offender at tree clearing and wiping out animals. According to the Government’s National Greenhouse Accounts, from 2010–18 almost two million hectares were cleared for grazing.  The solution is crystal clear – stop eating grazing animals and the land can be revegetated. The once-abundant koalas and 1,700 other threatened or endangered species will have their habitats restored, carbon reduction targets will be easily achieved, and cows and sheep will not

The legal smoke While Labor stopped taking donations from the tobacco industry in 2004 and the Liberals followed suit a decade later, the Nationals continue to accept donations from the tobacco industry. Australian Electoral Commission data shows that since the 1998–99 financial year, tobacco giant Philip Morris has donated $613,608 to the Nationals. The company is also a top-tier member of the Nationals, paying a $55,000 membership fee last financial year, which entitled the company to a program of boardroom access and high level lobbying opportunities. Ben Franklin MLC disavows any connection with this arrangement, saying he is a member of the Nationals’ state branch that does not receive tobacco company largesse. But where does this leave Kevin Hogan, Federal Member for Page? Paul Rea Coorabell ▶ More letters on page 16

How do smart parents stay sane in the holidays? They shop with us!