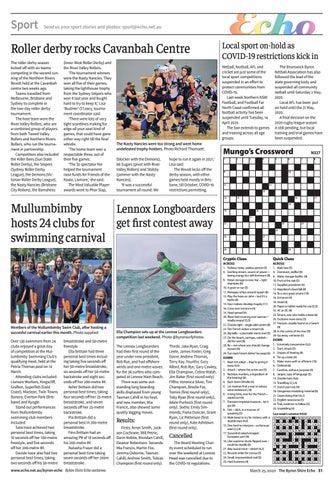 Send us your sport stories and photos: sport@echo.net.au

Roller derby rocks Cavanbah Centre The roller derby season kicked off with six teams competing in the second running of the Northern Rivers Revolt held at the Cavanbah centre two weeks ago. Teams travelled from Melbourne, Brisbane and Sydney to complete in the two-day roller derby tournament. The host team were the River Valley Rollers, who are a combined group of players from both Tweed Valley Rollers and Northern Rivers Rollers, who run the tournament in partnership. Competitors also included the Killer Bees (Sun State Roller Derby), the Snipers (Sydney Roller Derby League), the Demons (Victorian Roller Derby League), the Nasty Nancies (Brisbane City Rollers), the Bamshees

(Inner West Roller Derby) and the River Valley Rollers. ‘The tournament winners were the Nasty Nancies. They won all five of their games, taking the lighthouse trophy from the Sydney Snipers who won it last year and fought hard to try to keep it,’ Lisa ‘BustHer’ O’Leary, tournament coordinator said. ‘There were lots of very tight scorelines making for edge-of-your-seat kind of games, that could have gone either way right till the final whistle. ‘The home team won a respectable three, out of their five games. ‘The $5 spectator fee helped the tournament raise funds for Friends of the Koala, Lismore,’ she said. The Most Valuable Player awards went to Phar Slap,

Local sport on-hold as COVID-19 restrictions kick in Netball, football, AFL and cricket are just some of the local sport competitions suspended in an effort to protect communities from COVID-19. Last week Northern NSW Football, and Football Far North Coast confirmed all football activity has been suspended until Tuesday, 14 April 2020. The ban extends to games and training across all age groups.

The Nasty Nancies were too strong and went home undefeated trophy-holders. Photo Richard Thomsett. (blocker with the Demons), 96 Sugars (pivot with River Valley Rollers) and Stabby (jammer with the Nasty Nancies). ‘It was a successful tournament all round. We

hope to run it again in 2021,’ Lisa said. The Revolt kicks off the derby season, with other games held mostly in Brisbane, till October, COVID-19 restrictions permitting.

The Brunswick Byron Netball Association has also followed the lead of the state governing body and suspended all community netball until Saturday 2 May, 2020. Local AFL has been put on hold until the 31 May, 2020. A final decision on the 2020 rugby league season is still pending, but local training and trial games have been suspended.

The Lennox Longboarders had their first round of the year under new president, Rob Rye, and had offshore winds and one-metre waves for the 36 surfers who competed at Lennox Main Beach. There was some outstanding long boarding skills displayed from young Tasman Cahill in his heat, and new member, Mia Francis, also showed some quality logging moves.

Cancelled The Board Meeting Charity event scheduled to run over the weekend at Lennox Head was cancelled due to the COVID-19 regulations.

Members of the Mullumbimby Swim Club, after hosting a succesful carnival earlier this month. Photo supplied