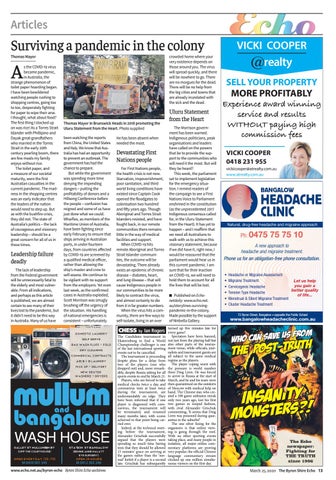 Surviving a pandemic in the colony Thomas Mayor

crowded home where your very existence depends on those around you. The virus will spread quickly, and there will be nowhere to go. There are no morgues for the dead. There will be no help from the big cities and towns that are already inundated with the sick and the dead.

s the COVID-19 virus became pandemic, in Australia, the strange phenomenon of toilet paper hoarding began. I have been bewildered watching people rushing to shopping centres, going toe to toe, desperately fighting for paper to wipe their arse. I thought, what about food? The first thing I stocked up on was rice! As a Torres Strait Islander with Phillipino and Dayak great-grandfathers who married in the Torres Strait in the early 20th century pearling boom, there are few meals my family enjoys without rice. The toilet paper, and a measure of our societal maturity, were the first Australian casualties in the current pandemic. The madness in the shopping centres was an early indicator that the leaders of the nation would need to step up. But as with the bushfire crisis, they did not. The state of Australia’s politics – the lack of courageous and visionary leadership – should be a great concern for all of us in these times.

Leadership failure deadly The lack of leadership from the Federal government will be unnecessarily fatal to the elderly and most vulnerable. From all indications, and perhaps as this article is published, we are almost certain to see many of their lives lost to the pandemic, but it didn’t need to be this way in Australia. Many of us have

Thomas Mayor in Brunswick Heads in 2018 promoting the Uluru Statement from the Heart. Photo supplied been watching the reports from China, the United States and Italy. We know that Australia has had an opportunity to prevent an outbreak. The government has had the chance to prepare. But while the government was spending more time denying the impending dangers – putting the profitability of donors and a Hillsong Conference before the people – confusion has reigned and some of us have just done what we could. Wharfies, as members of the Maritime Union of Australia, have been fighting since early February to ensure that ships arriving in Australian ports, in under fourteen days, from countries affected by COVID-19 are screened by a qualified medical officer, rather than allowing the ship’s master and crew to self-assess. We continue to be vigilant with no support from the employers. Yet even last week, as the confirmed cases in Australia exploded, Scott Morrison was smugly brushing off the urgency of the situation. His handling of national emergencies is consistent – unfortunately.

He has been absent when needed the most.

Devastating First Nations people For First Nations people, the health crisis is not new. Starvation, impoverishment, poor sanitation, and third world living conditions have existed since Captain Cook opened the floodgates to colonisation two hundred and fifty years ago. Though Aboriginal and Torres Strait Islanders resisted, and have fought back, in our remote communities there remains little in the way of medical facilities and support. When COVID-19 hits remote Aboriginal and Torres Strait Islander communities, the outcome will be devastating. There already exists an epidemic of chronic disease – diabetes, heart, and lung disease – that will cause Indigenous people in our communities to be more likely to contract the virus, and almost certainly to die from it in far greater numbers. When the virus hits a community, there are few ways to self-isolate, living in an over

by Ian Rogers The Candidates tournament in Ekaterinburg to find a World Championship challenger is one of the last international sporting events not to be cancelled. The tournament is proceeding despite pleas for a delay from two of the players (one who dropped out) and, more remarkably, despite Russia asking for all sports events to end by March 21. Players, who are forced to take medical checks twice a day, and coronavirus tests at least twice during the tournament, are understandably on edge. They have been informed that if one player is diagnosed with coronavirus, the tournament will be terminated, and resumed many months later, with scores achieved to that point being carried over. Indeed, at the technical meeting before the tournament, Alexander Grischuk successfully argued that the players were spending so much time having tests that they should be allowed 15 minutes’ grace on arriving at the games rather than the ‘normal’ forfeit if a player is a second late. Grischuk has subsequently

Uluru Statement from the Heart The Morrison government has been warned. Indigenous politicians, peak organisations and leaders have called on the powers that be to provide the support to the communities who will need it the most. But will they be heard? This week, the parliament sat to implement legislation for the emergency situation. I remind readers of the campaign to see a First Nations Voice to Parliament enshrined in the constitution (as the unprecedented 2017 Indigenous consensus called for, in the Uluru Statement from the Heart). It has yet to happen – and I reaffirm that we need all Australians to walk with us to achieve this visionary statement, because if we did have it, right now, I would be reassured that the parliament would hear us in this current pandemic. I am sure that for their inaction on COVID-19, we will need to hold them to account for all the lives that will be lost. Q Published on Echonetdaily: www.echo.net. au/storylines-survivingpandemic-in-the-colony. Made possible by the support of Ninbella Gallery.

turned up five minutes late for every game! Spectators have been banned, not just from the playing hall but also other parts of the tournament venue, while officials, journalists and tournament guests are all subject to the same medical regime as the players. The player coping worst with the pressure is world number three Ding Liren. He was forced to arrive in Russia at the start of March, and he and his team were then quarantined on the outskirts of Moscow with medical help on hand. The Chinese star, who created a 100 game unbeaten streak only two years ago, lost his first two games in insipid fashion, with rival Alexander Grischuk commenting, ‘It seems that Ding Liren was poisoned during quarantine in the suburbs!’ The one silver lining for the organisers is that online viewing is going through the roof. With no other sporting events taking place, and many people in isolation, all major online commentary platforms are proving very popular; the official Chinese language commentary stream clocked up one million simultaneous viewers on the first day.

us Who can save

The Echo newspaper: Fighting for THE TRUTH since 1986