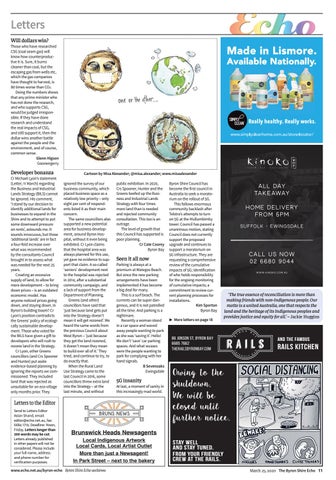 Letters Will dollars win? Those who have researched CSG (coal seam gas) will know how counterproductive it is. Sure, it burns cleaner than coal, but the escaping gas from wells etc, which the gas companies have thought to harvest, is 80 times worse than CO2. Doing the numbers shows that any prime minister who has not done the research, and who supports CSG, would be judged irresponsible. If they have done research and understand the real impacts of CSG, and still support it, then the dollar wins another battle against the people and the environment, and of course, common sense. Glenn Higson Goonengerry

Developer bonanza Cr Michael Lyon’s statement (Letter, 11 March) regarding the Business and Industrial Lands Strategy (BILS) cannot be ignored. His comment, ‘I stand by our decision to identify additional lands for businesses to expand in the Shire and to attempt to put some downward pressure on rents’, astounds me. It sounds innocuous, but those ‘additional lands’ are in fact a four-fold increase over what was recommended by the consultants Council brought in to assess what was needed for the next 25 years. Creating an excessive supply of land, to allow for more development – to bring down prices – is an outdated economic model. Has anyone noticed prices going down, and staying down, in Byron’s building boom? Cr Lyon’s position contradicts the Greens’ policy of ecologically sustainable development. Those who voted for the BILS have given a gift to developers who will rush to rezone land in the Strategy. Cr Lyon, other Greens councillors (and Crs Spooner and Hunter) put aside evidence-based planning by ignoring the reports we commissioned. They included land that was rejected as unsuitable for an eco-village only months prior. They

Cartoon by Misa Alexander; @misa.alexander; www.misaalexander ignored the survey of our business community, which placed business space as a relatively low priority – only eight per cent of respondents listed it as their main concern. The same councillors also supported a new potential area for business development, around Byron Hospital, without it even being exhibited. Cr Lyon claims that the hospital area was always planned for this use, yet gave no evidence to support that claim. A so-called ‘seniors’ development next to the hospital was rejected in 2014, after a substantial community campaign, and a lack of support from the Department of Planning. Greens (and other) councillors have said that ‘just because land gets put into the Strategy doesn’t mean it will get rezoned’. We heard the same words from the previous Council about West Byron – ‘just because they get the land rezoned, it doesn’t mean they mean to build over all of it.’ They tried, and continue to try, to do exactly that. When the Rural Land Use Strategy came to the last Council in 2016, some councillors threw extra land into the Strategy – at the last minute, and without

public exhibition. In 2020, Crs Spooner, Hunter and the Greens beefed up the Business and Industrial Lands Strategy with four times more land than is needed and rejected community consultation. This too is an outrage. The level of growth that this Council has supported is poor planning. Cr Cate Coorey Byron Bay

Seen it all now Parking is always at a premium at Wategos Beach. But since the new parking arrangements have been implemented it has become a big deal for many. This is a surf beach. The currents can be super dangerous, and it is not patrolled all the time. And parking is a nightmare. Recently a woman stood in a car space and waved away people wanting to park as she was ‘saving it’. Hello! We don’t ‘save’ car parking spaces. And what wusses were the people wanting to park for complying with her hand signals. B Sevenoaks Ewingsdale

ǬEĶŕƆëŕĶƐƷ At last, a moment of sanity in this increasingly mad world.

Letters to the Editor Send to Letters Editor Aslan Shand, email: editor@echo.net.au, fax: 6684 1719. Deadline: Noon, Friday. Letters longer than 200 words may be cut. Letters already published in other papers will not be considered. Please include your full name, address and phone number for verification purposes.

Byron Shire Council has become the first council in Australia to seek a moratorium on the rollout of 5G. This follows enormous community backlash after Telstra’s attempts to turn on 5G at the Mullumbimby tower. Council has passed a unanimous motion, stating Council does not currently support the proposed upgrade and continues to support a moratorium on 5G infrastructure. They are requesting a comprehensive review of the cumulative impacts of 5G; identification of who holds responsibility for the ongoing monitoring of cumulative impacts; a commitment to review current planning processes for installations. Kim Sporton Byron Bay

‘ The true essence of reconciliation is more than making friends with non-Indigenous people. Our motto is a united Australia, one that respects the land and the heritage of its Indigenous peoples and provides justice and equity for all.’ – Jackie Huggins

Owing to the shutdown, We will be closed until further notice.

Stay well and stay tuned. From your friendly crew at the Rails. lëſĈĲǩǬǽǩǧǩǧ The Byron Shire Echo 11