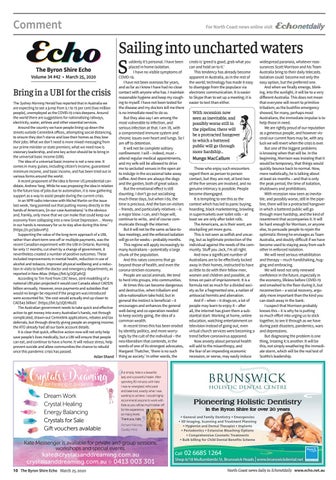 Bring in a UBI for the crisis The Sydney Morning Herald has reported that in Australia we are expecting to see a jump from 5.1 to 15 per cent (two million people), unemployed as the COVID-19 crisis deepens. Around the world there are suggestions for nationalising railways, electricity, water, airlines and other essential services. Around the country we have people lining up down the streets outside Centrelink offices, attempting social distancing, to ensure they don’t starve and lose their homes as they lose their jobs. What we don’t need is more mixed messaging from our prime minister or state premiers; what we need now is visionary leadership, and one key action should be to bring in the universal basic income (UBI). The idea of a universal basic income is not a new one. It comes in many guises, including citizen’s income, guaranteed minimum income, and basic income, and has been tried out in various forms around the world. A recent proponent of the idea is former US presidential candidate, Andrew Yang. While he was proposing the idea in relation to the future loss of jobs due to automation, it is now gathering support as a way to assist people during the current crisis. In an NPR radio interview with Michel Martin on the issue last week, Yang pointed out that putting money directly in the hands of Americans, (in our case Australians) ‘is the obvious and, frankly, only move that we can make that could keep our economy from collapsing into a new Great Depression… Money in our hands is necessary for us to stay alive during this time.’ (https://n.pr/3dovnPz) Supporting the value of the long-term approach of a UBI, rather than short-term one-off or multiple payments, was the recent Canadian experiment with the UBI in Ontario. Running for only 17 months, cut short by a change of government, it nevertheless created a number of positive outcomes. These included improvements in mental health, reduction in use of alcohol and tobacco, improved physical wellbeing and a reduction in visits to both the doctor and emergency departments, as reported in New Atlas: (https://bit.ly/2QCpfcQ) According to Tim Ford from CBC News, 2018 modelling of a national UBI plan projected it would cost Canada about CAD$76 billion annually. However, once payments and subsidies that would no longer be required if the program was introduced were accounted for, ‘the cost would actually end up closer to CAD$43 billion’. (https://bit.ly/2QErWuD) The Australian government needs to take quick and effective action to get money into every Australian’s hands, not through complicated, drawn-out Centrelink applications, rebates and tax deferrals, but through directly giving people an ongoing income; the ATO already had all our bank account details. It is clear that quick, effective action now will not only help save people’s lives medically, but a UBI will ensure that people can eat, and continue to have a home. It will reduce stress, help prevent suicide and allow communities the chance to rebuild once this pandemic crisis has passed. Aslan Shand

uddenly it’s personal. I have been placed in home isolation. I have no visible symptoms of COVID-19. I have not been overseas for years, and as far as I know I have had no close contact with anyone who has. I maintain reasonable hygiene and keep my coughing to myself. I have not been tested for the disease and my doctors tell me there is no immediate need to do so. But they also say I am among the most vulnerable to infection, and serious infection at that. I am 78, with a compromised immune system and chronic issues over heart and lungs. So I am off to detention. It will not be complete solitary confinement. I will – indeed, must – attend regular medical appointments, and my wife will be allowed to drive me to secluded venues in the open air to indulge in the occasional take-away coffee. And there are always the dogs and the garden, both of great solace. But the emotional effect is still daunting. I don’t go out socialising much these days, but when I do, the time is precious. And the ban on visitors – friends, and particularly relatives – is a major blow. I can, and I hope will, continue to write, and of course communicate through the internet. But it will not be the same as face-toface meetings, and the enforced isolation will go on for weeks – probably months. This regime will apply increasingly to many Australians – potentially a large chunk of the population. And this raises concerns that go beyond those of health, and even the corona-stricken economy. People are social animals. We tend to herd into groups, into communities. At times this can become dangerous and destructive, when tribalism and ultra-nationalism take hold, but in general the instinct is beneficial – it encourages and enhances the general well-being and co-operation needed to keep society going, the idea of a common wealth. In recent times this has been eroded by identity politics, and more worryingly by the cult of the individual – the neo-liberalism that contends, in the words of one of its strongest advocates, Margaret Thatcher, ‘there is no such thing as society.’ In other words, the

credo is ‘greed is good, grab what you can and hold on to it.’ This tendency has already become apparent in Australia, as in the rest of the world; technology has made it easy to disengage from the populace via electronic communication. It is easier to Skype than to set up a meeting; it is easier to text than either.

With recession now seen as inevitable, and possibly worse still in the pipeline, there will be a protracted hangover in which a battered public will go through more hardship…

Mungo MacCallum Those who enjoy such encounters regard them as person to person contact, but they are not; at best two of the five senses are involved, and no genuine intimacy is possible. People become disengaged. It is tempting to see this as the context which has led to panic buying, hoarding, black marketeering, brawling in supermarkets over toilet rolls – at least we are only after toilet rolls. The Americans, as is their wont, are stockpiling yet more guns. This is not seen as selfish and uncaring, but as legitimate protection of the individual against the needs of the community. Stuff you Jack, I’m all right. And now a significant number of Australians are to be effectively locked away in their homes, instructed to have as little to do with their fellow men, women and children and possible, at times on pain of imprisonment. It is a formula not so much for a divided society as for a fragmented one, a nation of antisocial hermits and alienation. And if – when – it drags on, a lot of people may learn to enjoy it – after all, the internet has given them a substantial start. Working at home, online education, watching entertainment on television instead of going out, even virtual church services were becoming a trend before coronavirus appeared. Now anxiety about personal health will add to the misanthropy, and the fear of an impending economic recession, or worse, may easily induce

widespread paranoia, whatever reassurances Scott Morrison and his Team Australia bring to their daily telecasts. Isolation could become not only the easy option, but the preferred one. And when we finally emerge, blinking, into the sunlight, it will be to a very different Australia. This does not mean that everyone will revert to primitive tribalism; as the bushfire emergency showed, for many, perhaps most Australians, the immediate impulse is to help those in need. We are rightly proud of our reputation as a generous people, and however visceral our current fears may be, with any luck we will revert when the crisis is over. But one of the biggest problems is knowing when that will be. In the beginning, Morrison was insisting that it would be temporary, that things would quickly bounce back to normal. Now, more realistically, he is talking about at least six months – and that is only the peak period, the time of isolation, shutdowns and prohibitions. With recession now seen as inevitable, and possibly worse, still in the pipeline, there will be a protracted hangover in which a battered public will go through more hardship, and the kind of resentment that accompanies it. It will be hard enough for Morrison, or anyone else, to persuade people to rejoin the optimistic throng he envisages as Team Australia, and doubly difficult if we have become used to staying away from each other in enforced isolation. We will need serious rehabilitation and therapy – much handshaking, hugging and embracing. We will need not only renewed confidence in the future, especially in the economy, lifeless before COVID-19 and smashed to the floor during it, but reconnection – a social recovery, arguably more important than the kind you can stash away in the bank. I suspect that Morrison probably knows this – it is why he is putting so much effort into urging us to stick together, to see it through as we have during past disasters, pandemics, wars and depressions. But diagnosing the problem is one thing, treating it is another. It will be this, not simply weathering the immediate storm, which will be the real test of ScoMo’s leadership.