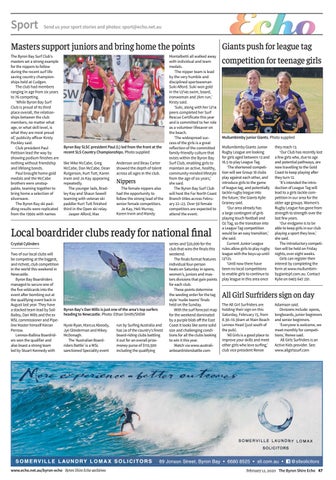 Send us your sport stories and photos: sport@echo.net.au

Masters support juniors and bring home the points The Byron Bay Surf Club’s masters set a strong example for the nippers to follow during the recent surf life saving country championships held at Cudgen. The club had members ranging in age from six years to 76 competing. ‘While Byron Bay Surf Club is proud of its third place overall, the relationships between the club members, no matter what age, or what skill level, is what they are most proud of,’ publicity officer Kirsty Pockley said. Club president Paul Pattison lead the way by showing podium finishes are nothing without friendship and lifelong bonds. Paul brought home gold medals and the McCabe brothers were unstoppable, teaming together to bring home a selection of silverware. The Byron Bay ski paddling results were replicated from the 1990s with names

Anderson and Beau Carter showed the depth of talent across all ages in the club.

Nippers The female nippers also had the opportunity to follow the strong lead of the senior female competitors. Jo Kay, Heli Murray, Karen Irwin and Mandy

Montalbetti all walked away with individual and team medals. ‘The nipper team is lead by the very humble and disciplined sportswoman Suki Alford. Suki won gold in the U/14s swim, board, ironwoman and 2km run,’ Kirsty said. ‘Suki, along with her U/14 peers completed her Surf Rescue Certificate this year and is committed to her role as a volunteer lifesaver on the beach. ‘The widespread success of the girls is a great reflection of the committed family-friendly culture that exists within the Byron Bay Surf Club, enabling girls to maintain an active, healthy, community-minded lifestyle from the age of six years,’ she said. The Byron Bay Surf Club will host the Far North Coast Branch titles across February 22–23. Over 50 female competitors are expected to attend the event.

dşĈëōćşëſĎſĶĎĕſĈōƖćƆſĕëĎƷĪşſŕëƐĶşŕëōǕŕëō Crystal Cylinders Two of our local clubs will be competing at the biggest, and richest, club competition in the world this weekend in Newcastle. Byron Bay Boardriders managed to secure one of the five wildcards into the event after bombing out at the qualifying event back in August last year. They have a stacked team lead by Soli Bailey, Dan Wills and the ex WSL commissioner and Pipeline Master himself Kieran Perrow. Lennox-Ballina Boardriders won the qualifier and also boast a strong team led by Stuart Kennedy with

run by Surfing Australia and has 24 of the country’s finest board-riding clubs battling it out for an overall prizemoney purse of $110,500 including the qualifying

series and $20,000 for the club that wins the finals this weekend. The finals format features individual four-person heats on Saturday in opens, women’s, juniors and masters divisions that gain points for each club. These points determine the seeding order for the tag style ‘nudie teams’ finals held on the Sunday. With the surf forecast map for the weekend dominated by a purple blob off the East Coast it looks like some solid size and challenging conditions for all the clubs looking to win it this year. Watch via www.australianboardridersbattle.com

Mullumbimby junior Giants. Photo supplied Mullumbimby Giants Junior Rugby League are looking for girls aged between 13 and 16.5 to play League Tag. ‘The shortened competition will see Group 18 clubs play against each other, and introduce girls to the game of league tag, and potentially tackle rugby league into the future,’ the Giants Kylie Grainey said. ‘Our area already has a large contingent of girls playing touch football and Oz Tag, so the transition into a League Tag competition would be an easy transition,’ she said. Current Junior League rules allow girls to play rugby league with the boys up until U/12s. ‘Until now there have been no local competitions to enable girls to continue to play league in this area once

they reach 13. ‘Our Club has recently lost a few girls who, due to age and potential pathways, are now travelling to the Gold Coast to keep playing after they turn 12. ‘It’s intended the introduction of League Tag will lead to a girls tackle competition in our area for the older age groups. Women’s Rugby League has gone from strength to strength over the last few years. ‘Our endgame is to be able to keep girls in our club playing a sport they love,’ she said. The introductory competition will be held on Friday nights, over eight weeks. Girls can register their interest by completing the form at www.mullumbimbygiantsjrl.com.au. Contact Kylie on 0403 647 291.

All Girl Surfriders sign on day The All Girl Surfriders are holding their sign on this Saturday, February 15, from 8.30–10.30am at Main Beach Lennox Head (just south of the pub). ‘All Girls is a good place to improve your skills and meet other girls who love surfing,’ club vice president Renee