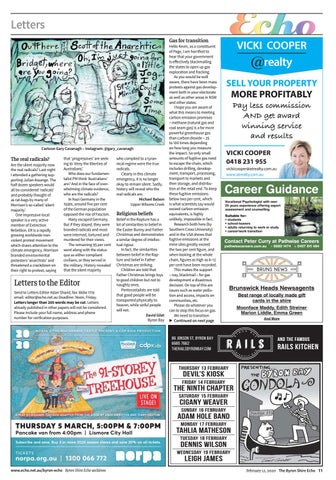 The real radicals? Are the silent majority now the real radicals? Last night I attended a gathering supporting Julian Assange. The half dozen speakers would all be considered ‘radicals’ and probably thought of as rat-bags by many of Morrison’s so-called ‘silent majority’. One impressive local speaker is a very active member of Extinction Rebellion. ER is a rapidly growing worldwide nonviolent protest movement which draws attention to the climate emergency. Morrison branded environmental protesters ‘anarchists’ and threatened a crackdown on their right to protest, saying

that ‘progressives’ are seeking to ‘deny the liberties of Australians’. Who does our fundamentalist PM think ‘Australians’ are? And in the face of overwhelming climate evidence, who are the radicals? In Nazi Germany in the 1930s, around five per cent of the German population opposed the rise of Fascism. Many escaped Germany. But if they stayed, they were branded radicals and most were interned, tortured and murdered for their views. The remaining 95 per cent went along with the status quo as either compliant civilians, or they served in the military. History revealed that the silent majority

Letters to the Editor Send to Letters Editor Aslan Shand, fax: 6684 1719 email: editor@echo.net.au Deadline: Noon, Friday. Letters longer than 200 words may be cut. Letters already published in other papers will not be considered. Please include your full name, address and phone number for verification purposes.

who complied to a tyrannical regime were the true radicals. Clearly in this climate emergency, it is no longer okay to remain silent. Sadly, history will reveal who the real radicals are. Michael Balson Upper Wilsons Creek

Hello Kevin, as a constituent of Page, I am horrified to hear that your government is effectively blackmailing the states to open up gas exploration and fracking. As you would be well aware, there have been mass protests against gas development both in your electorate as well as other areas in NSW and other states. I hope you are aware of what this means to meeting carbon emission promises – methane (natural gas and coal seam gas) is a far more powerful greenhouse gas than carbon dioxide – 25 to 100 times depending on how long you measure the impact. So only small amounts of fugitive gas need to escape the chain, which includes drilling, development, transport, processing, transport to markets and then storage, and distribution at the retail end. To keep these fugitive emissions below two per cent, which is what scientists say would exceed carbon emission equivalents, is highly unlikely, impossible in fact. Research both here (by Southern Cross University) and in the USA shows that fugitive emissions at the mine sites greatly exceed the two per cent figure, and when looking at the whole chain, figures as high as 6–12 per cent have been recorded. This makes the support – nay, blackmail – for gas development a disastrous decision. On top of this are issues such as water pollution and access, impacts on communities, etc. Please do whatever you can to stop this focus on gas. We need to transition ▶ Continued on next page