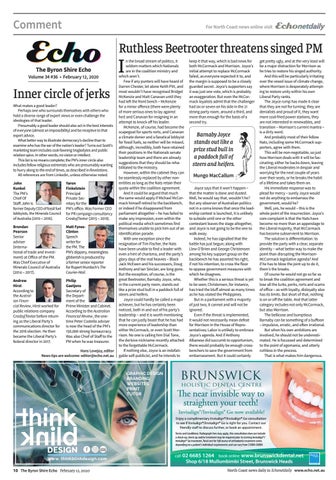 Inner circle of jerks What makes a good leader? Perhaps one who surrounds themselves with others who hold a diverse range of expert views or even challenge the ideologies of that leader. Presumably a good leader should also act in the best interests of everyone (almost an impossibility) and be receptive to that expert advice. What better way to illustrate democracy’s decline than to examine who has the ear of the nation’s leader? Turns out Scott’s marketing team includes coal-fawning troglodytes and public relation spivs. In other words, no vision or intellect. This list is no means complete; the PM’s inner circle also includes fellow religious extremists who are presumably wanting to hurry along to the end of times, as described in Revelations. All references are from Linkedin, unless otherwise noted.

Brendan Pearson Senior adviser (international of trade and investment) at Office of the PM. Was Chief Executive of Minerals Council of Australia (2014 – 2017).

Matt FynesClinton Speech writer for the PM. The PM’s slippery, meaningless gibberish is produced by a former senior reporter for Rupert Murdoch’s The Courier-Mail.

Philip Gaetjens Secretary of the Department of the Prime Minister and Cabinet. According to the Australian Financial Review, the onetime Peter Costello adviser is now the head of the PM’s 150,000 strong bureaucracy. Was also Chief of Staff to the PM when he was treasurer.

n the broad stream of politics, it seldom matters which Nationals are in the coalition ministry and which aren’t. Few if any punters will have heard of Darren Chester, let alone Keith Pitt, and most wouldn’t have recognised Bridget McKenzie and Matt Canavan until they had left the front bench – McKenzie for a minor offence (there were plenty of more serious ones to lay against her) and Canavan for resigning in an attempt to knock off his leader. McKenzie, of course, had become the scapegoat for sports rorts, and Canavan a climate denier and a fanatical lobbyist for fossil fuels, so neither will be missed, although, incredibly, both have retained their positions in the Nationals senate leadership team and there are already suggestions that they should be rehabilitated to the ministry. However, within the cabinet they can be seamlessly replaced by other nonentities as long as the Nats retain their quota within the coalition agreement. And it could be argued that much the same would apply if Michael McCormack himself retired to the backbench, or indeed if he disappeared from parliament altogether – he has failed to make any impression, even within the political media which sometimes find themselves unable to pick him out of an identification parade. With one exception since the resignation of Tim Fischer, the Nats have been unable to find a leader with even a hint of charisma, and the party’s glory days of the real heavies – Black Jack McEwen and his successors, Doug Anthony and Ian Sinclair, are long gone. But the exception, of course, is the great Beetrooter, Barnaby Joyce, who, in the current party room, stands out like a prize stud bull in a paddock full of steers and heifers. Joyce could hardly be called a major achiever, but he has certainly been noticed, both in and out of his party’s leadership – and it is worth mentioning that he can justly boast that he has had more experience of leadership than either McCormack, or even Scott Morrison. No one is calling him Dial Tone, the derisive nickname recently attached to the forgettable McCormack. If nothing else, Joyce is an indefatigable self-publicist, and he intends to

keep it that way, which is bad news for both McCormack and Morrison. Joyce’s initial attempt to replace McCormack failed, as everyone expected it to, and the margin is supposed to be a closely guarded secret. Joyce’s supporters say it was just one vote, which is probably an exaggeration. But even the McCormack loyalists admit that the challenger had six or seven on his side in the 21 strong party room, around a third, and more than enough for the basis of a second try.

Barnaby Joyce stands out like a prize stud bull in a paddock full of steers and heifers. Mungo MacCallum Joyce says that it won’t happen – that the matter is done and dusted. Well, he would say that, wouldn’t he? But any observer of Australian politics not in a coma knows that once the leadership contest is launched, it is unlikely to subside until one or the other contestant leaves the stage altogether, and Joyce is not going to be the one to walk away. Indeed, he has signalled that the battle has just begun; along with Llew O’Brien and George Christensen among his key support group on the backbench he has asserted his right, if not his intention, to cross the floor to oppose government measures with which he disagrees. Whether this is a serious threat is yet to be seen; Christensen, for instance, has tried the bluff almost as many times as he has visited the Philippines. But in a parliament with a majority of just two, it cannot and will not be ignored. Even if the threat is implemented, it would not necessarily mean defeat for Morrison in the House of Representatives; Labor is unlikely to embrace Joyce’s agenda. And if Anthony Albanese did succumb to opportunism, there would probably be enough crossbenchers to save the government from embarrassment. But it could certainly

get pretty ugly, and at the very least will be a major distraction for Morrison as he tries to restore his singed authority. And this will be particularly irritating over the vexed issue of climate change, where Morrison is desperately attempting to restore unity within his own Liberal Party ranks. The Joyce rump has made it clear that they are not for turning; they are denialists and proud of it, they want more coal-fried power stations, they are not interested in renewables, and transition – Morrison’s current mantra – is a dirty word. And probably most of their fellow Nats, including some McCormack supporters, agree with them. This will be non-negotiable, so just how Morrison deals with it will be fascinating; either he backs down, leaving the Liberal moderates in despair and worrying for the next couple of years over their seats, or he breaks the habit of a lifetime and takes them on. His immediate response was to plead for mercy – surely Joyce would not do anything to embarrass the government, would he? Well, yes, he would – this is the whole point of the insurrection. Joyce’s core complaint is that the Nats have become no more than an appendage to the Liberal majority, that McCormack has become subservient to Morrison. The solution is differentiation: to provide the party with a clear, separate identity – what better way to make the point than disrupting the MorrisonMcCormack legislative agenda? And if he has to blow the joint up to do it, them’s the breaks. Of course he would not go so far as to break the coalition agreement and lose all the lurks, perks, rorts and scams of office – as with loyalty, disloyalty also has its limits. But short of that, nothing is on or off the table. And that latter category includes not only McCormack, but also Morrison. The bellicose and bumptious Barnaby can be something of a buffoon – impulsive, erratic, and often irrational. But when his own ambitions are involved, he should not be underestimated. He is focussed and determined to the point of egomania, and utterly ruthless in the process. That is what makes him dangerous.