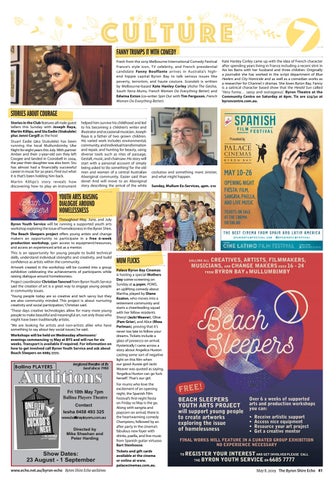 CULTURE FANNY TRUMPS IT WITH COMEDY

Kate Hanley Corley came up with the idea of French character after spending years living in France including a recent stint in Aix les Bains with her husband and three children. Originally a journalist she has worked in the script department of Blue Heelers and City Homicide and as well as a comedian works as a researcher for Channel 7 dramas. She loves Byron Bay. Fanny is a satirical character based show that the Herald Sun called ‘Very funny… sassy and outrageous’. Byron Theatre at the Community Centre on Saturday at 8pm. Tix are $25/30 at byroncentre.com.au.

STORIES ABOUT COURAGE Stories in the Club features all male guest tellers this Sunday with Joseph Raya, Martin Killips, and Stu Eadie (Stukulele) plus Jenni Cargill as the host Stuart Eadie (aka Stukulele) has been running the local Mullumbimby Uke Night for eight years this July. With partner Amber and their 2-year-old son they left Coogee and landed in Coorabell in 2004, the year their daughter was also born. Stu has almost had a financially successful career in music for 30 years. Find out what it is that’s been holding him back. Martin Killips’s story reveals how discovering how to play an instrument

helped him survive his childhood and led to his becoming a children’s writer and illustrator and occasional musician. Joseph Raya is a father of two grown children. His varied work includes environmental, community, and individual transformation and repair, and hunting for beauty, using diverse tools such as rites of passage, Gestalt, music, and chainsaw. His story will start with a personal account of simply being asked to ‘do something’ for the old men and women of a central Australian Aboriginal community. Easier said than done! And will move to an Aboriginal story describing the arrival of the white

cockatoo and something more sinister, and what might happen. Sunday, Mullum Ex-Services, 4pm. $10

YOUTH ARTS RAISING DIALOGUE AROUND HOMELESSNESS Throughout May, June, and July Byron Youth Service will be running a supported youth arts workshop exploring the issue of homelessness in the Byron Shire. The Beach Sleepers project offers young artists and change makers an opportunity to participate in a free 6-week production workshop, gain access to equipment/resources, and access an experienced artist as a mentor. This is an opportunity for young people to build technical skills, understand individual strengths and creativity, and build confidence as artists within the community. Artwork created in the workshop will be curated into a group exhibition celebrating the achievements of participants while raising dialogue around homelessness. Project coordinator Christian Tancred from Byron Youth Service said the creation of art is a great way to engage young people in community issues. ‘Young people today are so creative and tech savvy but they are also community minded. This project is about nurturing creativity and social participation,’ Christian said. ‘These days creative technologies allow for many more young people to make beautiful and meaningful art, not only those who might have been traditionally artistic. ‘We are looking for artists and non-artists alike who have something to say about key social issues,’ he said. Workshops will be held on Wednesday afternoons/ evenings commencing 15 May at BYS and will run for six weeks. Transport is available if required. For information on how to get involved call Byron Youth Service and ask about Beach Sleepers on 6685 7777.

MUM FLICKS Palace Byron Bay Cinemas is hosting a special Mothers Day soiree screening on Sunday at 4.30pm. POMS, an uplifting comedy about Martha, played by Diane Keaton, who moves into a retirement community and starts a cheerleading squad with her fellow residents Sheryl (Jacki Weaver), Olive (Pam Grier), and Alice (Rhea Perlman), proving that it’s never too late to follow your dreams. Tickets include a glass of prosecco on arrival. Hysterically I came across a story about Angelica Huston casting some sort of negative light on this film when our good Aussie girl Jacki Weaver was quoted as saying, ‘Angelica Huston can go fuck herself’. That’s our girl. For mums who love the excitement of an opening night, the Spanish Film Festival’s first-night fiesta on Friday 10 May is the go. Along with sangria and popcorn on arrival, there is the heartwarming comedy Champions, followed by an after party in the cinema’s fabulous new foyer with drinks, paella, and live music from Spanish guitar virtuoso Bart Stenhouse. Tickets and gift cards available at the cinema or online at www. palacecinemas.com.au.