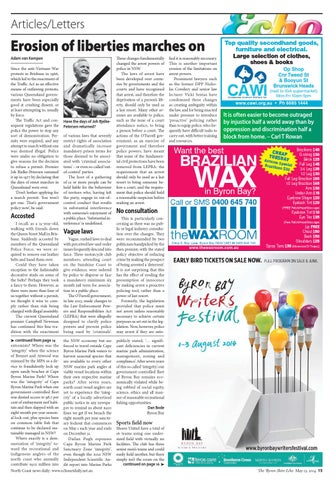 Since the anti-Vietnam War protests in Brisbane in 1966, which led to the enactment of the Traffic Act as an effective means of outlawing protests, various Queensland governments have been especially good at crushing dissent, or at least attempting to, usually by force. The Traffic Act and consequent regulations gave the police the power to stop any sort of demonstration. Permits were required, and any attempt to march without one was deemed illegal. Police were under no obligation to give reasons for the decision to refuse a permit. Premier Joh Bjelke-Petersen summed it up in 1977 by declaring that the days of street marches in Queenlsand were over. ‘Don’t bother applying for a march permit. You won’t get one. That’s government policy now’, he said.

Accosted I recall, as a 15-year-old, walking with friends down the Queen Street Mall in Brisbane. Suddenly accosted by members of the Queensland Police Force, we were required to remove our leather belts and hand them over. Could they have taken exception to the fashionable decorative studs on some of the belts? Perhaps they took a fancy to them. However, as there were more than four of us together without a permit, we thought it wise to comply rather than risk being charged with illegal assembly. The current Queensland premier Campbell Newman has continued this fine tradition with the enactment

Have the days of Joh BjelkePetersen returned?

of various laws that severely restrict rights of association and dramatically increase mandatory prison terms for those deemed to be associated with ‘criminal associations’ – or even so-called ‘outof-control’ parties. The host of a gathering of 12 or more people can be held liable for the behaviour of invitees who, having left the party, engage in out-of– control conduct that results in substantial interference with someone’s enjoyment of a public place. ‘Substantial interference’ is undefined.

Vague laws Vague, rushed laws to deal with perceived law-and-order issues frequently descend into farce. Three motorcycle club members, attending court on the Sunshine Coast to give evidence, were ordered by police to disperse or face a mandatory minimum six month jail term for association in a public place. The O’Farrell government, in late 2013, made changes to the Law Enforcement Powers and Responsibilities Act (LEPRA) that were allegedly designed to clarify police powers and prevent police being sued by ‘criminals’.

continued from page 14 the NSW economy but are extremists? Where was the forced to travel outside Cape ‘integrity’ when the science Byron Marine Park waters to of Bennet and Atwood was harvest seasonal species that misused by the MPA as a de- are available to every other vice to fraudulently lock up NSW marine park angler at open sandy beaches at Cape viable vessel locations within Byron Marine Park? Where their own respective marine was the ‘integrity’ of Cape parks? After seven years, Byron Marine Park when our north coast vessel anglers are government-controlled fleet yet to experience the ‘integwas denied access to 98.7 per rity’ of a locally advertised cent of embayment reef habi- public notice in any newspatats and then slapped with an per to remind us about $500 eight month per year season- fines we get if we breach the al lock-out, plus species bans eight month per year sanctuon common table fish that ary lockout that commences continue to be declared sus- on May 1 each year and ends tainably managed in NSW? on December 31. Where exactly is a demDailan Pugh espouses onstration of ‘integrity’ to- Cape Byron Marine Park ward the recreational and Sanctuary Zone ‘integrity’, indigenous anglers of the even though the 2012 NSW north coast who annually Independent Scientific Aucontribute $502 million into dit report into Marine Parks North Coast news daily: www.echonetdaily.net.au

These changes fundamentally changed the arrest powers of police in NSW. The laws of arrest have been developed over centuries by governments and the courts and have recognised that arrest, and therefore the deprivation of a person’s liberty, should only be used as a last resort. Many other avenues are available to police, such as the issue of a court attendance notice, to bring a person before a court. The actions of the O’Farrell government, as an exercise of government and therefore police powers, have meant that some of the fundamental civil protections have been removed from LEPRA: the requirement that an arrest should only be used as a last resort to bring someone before a court, and the requirement that police should hold a reasonable suspicion before making an arrest.

fied it is reasonably necessary. This is another important erosion of the limitations on arrest powers. Prominent lawyers such as the former DPP Nicholas Cowdery and senior law lecturer Vicki Sentas have condemned these changes as creating ambiguity within the law, and for being enacted under pressure to introduce ‘proactive’ policing rather than to equip police, who frequently have difficult tasks to carry out, with better training and resources.

It is often easier to become outraged by injustice half a world away than by oppression and discrimination half a block from home. – Carl T Rowan

No consultation This is particularly concerning as there was no public or legal industry consultation over the changes. They were recommended by two politicians handpicked by the then premier, with the stated policy objective of reducing crime by making the prospect of being arrested a ‘deterrent’. It is not surprising that this has the effect of eroding the presumption of innocence by making arrest a proactive policing tool, rather than a power of last resort. Formerly, the legislation provided that police must not arrest unless reasonably necessary to achieve certain purposes as set out in the legislation. Now, however, police may arrest if they are satis-

Sports field now Shores United have a total of 16 teams using one undersized field with virtually no facilities. The club has three senior men’s teams and could easily field another, but there simply isn’t the room on the continued on page 16 The Byron Shire Echo May 13, 2014 15