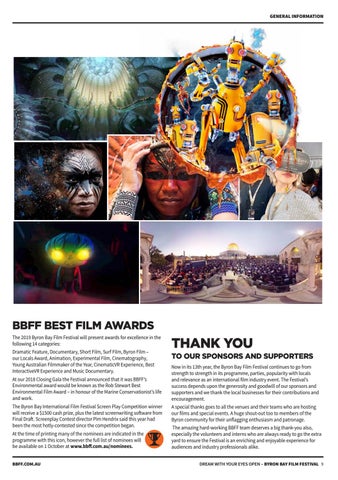 BBFF BEST FILM AWARDS The 2019 Byron Bay Film Festival will present awards for excellence in the following 14 categories: Dramatic Feature, Documentary, Short Film, Surf Film, Byron Film – our Locals Award, Animation, Experimental Film, Cinematography, Young Australian Filmmaker of the Year, CinematicVR Experience, Best InteractiveVR Experience and Music Documentary. At our 2018 Closing Gala the Festival announced that it was BBFF’s Environmental award would be known as the Rob Stewart Best Environmental Film Award – in honour of the Marine Conservationist’s life and work. The Byron Bay International Film Festival Screen Play Competition winner will receive a $1500 cash prize, plus the latest screenwriting software from Final Draft. Screenplay Contest director Pim Hendrix said this year had been the most hotly-contested since the competition began. At the time of printing many of the nominees are indicated in the programme with this icon, however the full list of nominees will be available on 1 October at www.bbff.com.au/nominees. BBFF.COM.AU

TO OUR SPONSORS AND SUPPORTERS Now in its 13th year, the Byron Bay Film Festival continues to go from strength to strength in its programme, parties, popularity with locals and relevance as an international film industry event. The Festival’s success depends upon the generosity and goodwill of our sponsors and supporters and we thank the local businesses for their contributions and encouragement. A special thanks goes to all the venues and their teams who are hosting our films and special events. A huge shout-out too to members of the Byron community for their unflagging enthusiasm and patronage. The amazing hard-working BBFF team deserves a big thank-you also, especially the volunteers and interns who are always ready to go the extra yard to ensure the Festival is an enriching and enjoyable experience for audiences and industry professionals alike. DREAM WITH YOUR EYES OPEN – BYRON BAY FILM FESTIVAL 9