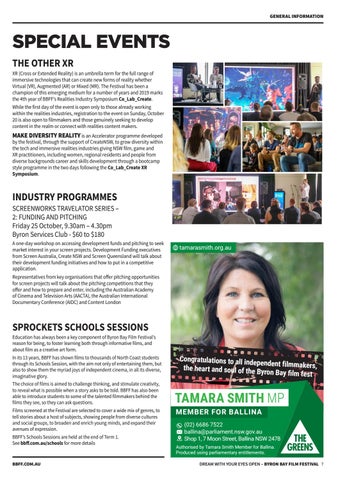 SPECIAL EVENTS THE OTHER XR

XR (Cross or Extended Reality) is an umbrella term for the full range of immersive technologies that can create new forms of reality whether Virtual (VR), Augmented (AR) or Mixed (MR). The Festival has been a champion of this emerging medium for a number of years and 2019 marks the 4th year of BBFF’s Realities Industry Symposium Co_Lab_Create. While the first day of the event is open only to those already working within the realities industries, registration to the event on Sunday, October 20 is also open to filmmakers and those genuinely seeking to develop content in the realm or connect with realities content makers.

by the festival, through the support of CreateNSW, to grow diversity within the tech and immersive realities industries giving NSW film, game and XR practitioners, including women, regional residents and people from diverse backgrounds career and skills development through a bootcamp style programme in the two days following the Co_Lab_Create XR Symposium.

SCREENWORKS TRAVELATOR SERIES – 2: FUNDING AND PITCHING Friday 25 October, 9.30am – 4.30pm Byron Services Club - $60 to $180 A one-day workshop on accessing development funds and pitching to seek market interest in your screen projects. Development Funding executives from Screen Australia, Create NSW and Screen Queensland will talk about their development funding initiatives and how to put in a competitive application. Representatives from key organisations that offer pitching opportunities for screen projects will talk about the pitching competitions that they offer and how to prepare and enter, including the Australian Academy of Cinema and Television Arts (AACTA), the Australian International Documentary Conference (AIDC) and Content London

Education has always been a key component of Byron Bay Film Festival’s reason for being, to foster learning both through informative films, and about film as a creative art form. In its 13 years, BBFF has shown films to thousands of North Coast students through its Schools Session, with the aim not only of entertaining them, but also to show them the myriad joys of independent cinema, in all its diverse, imaginative glory. The choice of films is aimed to challenge thinking, and stimulate creativity, to reveal what is possible when a story asks to be told. BBFF has also been able to introduce students to some of the talented filmmakers behind the films they see, so they can ask questions. Films screened at the Festival are selected to cover a wide mix of genres, to tell stories about a host of subjects, showing people from diverse cultures and social groups, to broaden and enrich young minds, and expand their avenues of expression. BBFF’s Schools Sessions are held at the end of Term 1. See bbff.com.au/schools for more details

Congratulations to all ind ependent filmmakers, the heart and soul of the Byron Bay film fest